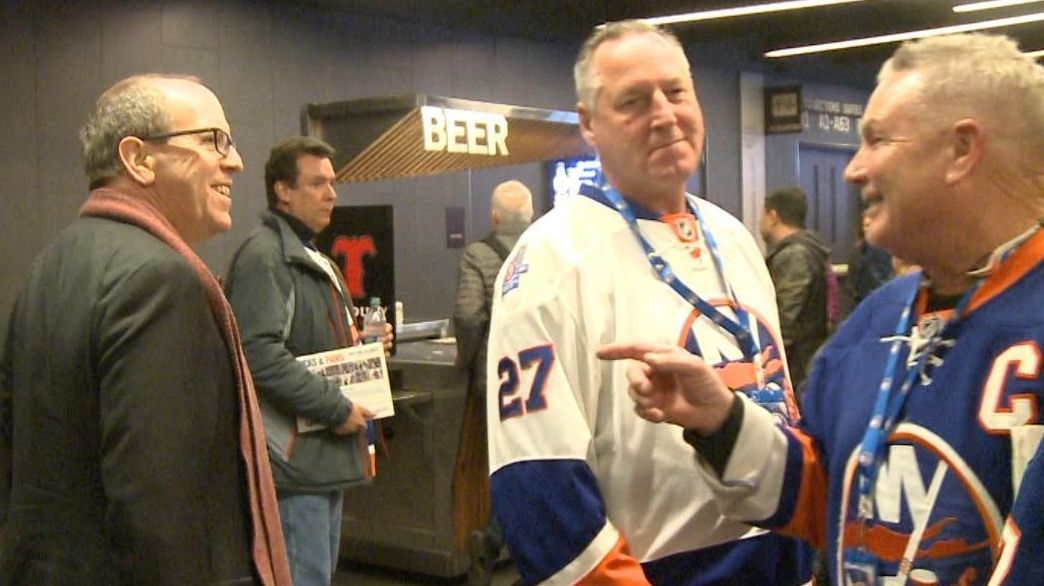 On Tuesday, Dec. 19, 2017, Isles fans attending the game vs. the Red Wings react to the news that the Islanders' arena bid has been picked for Belmont Park. (Credit: Newsday/Robert Cassidy/Greg Inserillo)

Plans for an 18,000-seat arena for the New York Islanders at Belmont Park in Elmont were greeted with cheers from hockey fans Tuesday. But sports business experts and area business leaders fear the Belmont arena could cannibalize show opportunities at the recently renovated Nassau Coliseum, located 14 miles away.

The Islanders were informed Tuesday that the state selected its bid to build a new arena that would host 150 events annually at the state-run park, according to sources familiar with the situation.

Victor Matheson, a sports economist with the College of the Holy Cross in Worcester, Massachusetts, said the two arenas will aggressively compete with each other for concerts and shows, splitting available dates and reducing the amount they could charge if they had the market to themselves.

“These venues will cannibalize events from one another,” Matheson said. “Combine that with MSG and Barclays [Center in Brooklyn] and you are starting to have a pretty crowded market, even for a large metro area like New York City.”

The Coliseum reopened in April after an 18-month, $160 million renovation. Plans for an adjacent retail and entertainment center have been tied up in litigation, and a proposed biotech center next to the arena has failed to materialize.

While the Coliseum does not have a professional sports team as an anchor tenant, the arena has attracted a steady flow of major musical acts, including Billy Joel, Barbra Streisand and Bruno Mars.

With construction at Belmont expected to take two years, county officials have said recently that they hope the arena can build a loyal following that will allow it to withstand the competition.

But Joel Maxcy, vice president of the International Association of Sports Economists, which analyzes sports financing, said arenas already tend to be underutilized, sitting empty for 150 days a year.

“To me it would be very difficult for two similar arenas, hosting similar type events, to coexist in such close proximity,” he said. “There are only so many sport and entertainment events that can be supported by the region.”

Others argue that Long Island, with a population of nearly 3 million and one of the wealthiest consumer bases, can support both arenas.

“Populationwise, the region is big enough to accommodate both arenas,” said Kevin Law, president of the Long Island Association, the area’s largest business group. “The key will be to make sure that the Nassau Coliseum gets the same quality events that the new facility at Belmont gets.”

Long Island faithful all aboard on Isles’ move to BelmontSean McSwiggan and his sister, Tara, were Brooklyn bound on a 4:50 p.m. LIRR train ... Sources: Isles’ bid picked for Belmont ParkThe Islanders' bid includes an 18,000-seat, year-round arena, as well as 435,000 square feet of space for retail, a hotel with about 250 rooms and a 10,000-square-foot "innovation center" that would be developed with resident input.