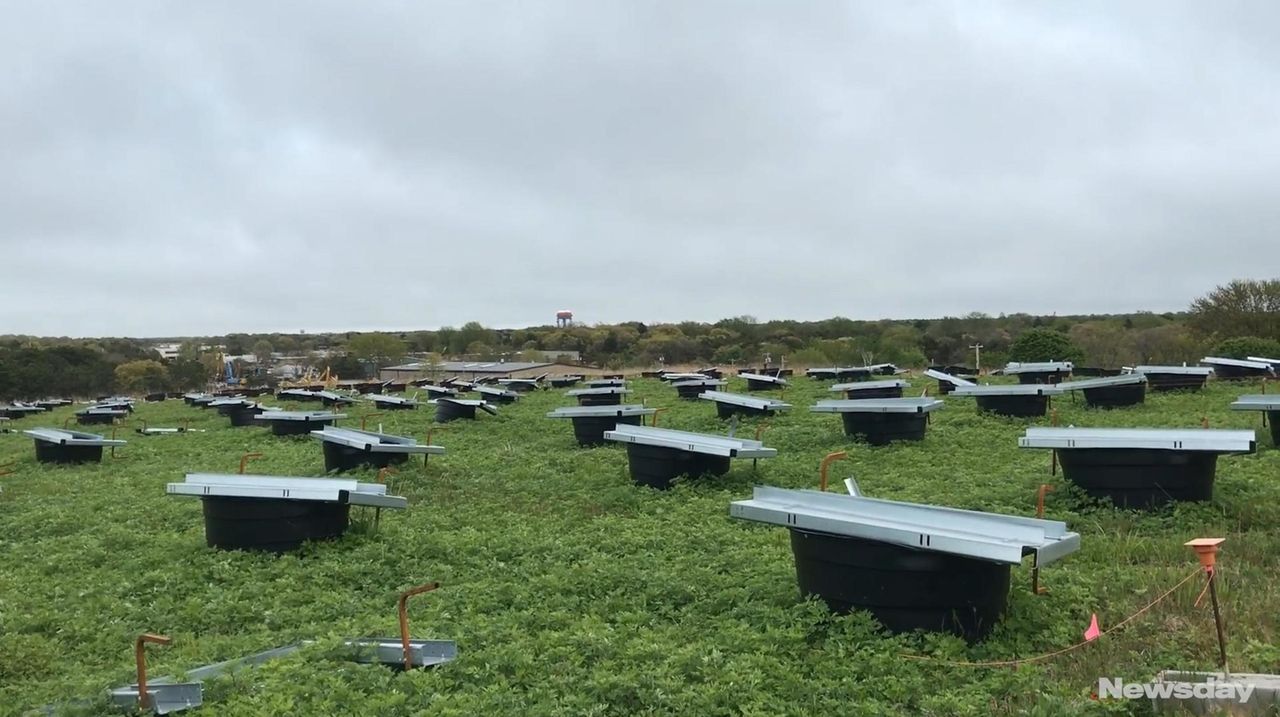 Commissioner James Heil of the Islip Department of Environmental Control on Thursday spoke about plans to create solar farms at the town's closed landfills in Holbrook and Hauppauge. Credit: Newsday / Rachelle Blidner

The solar arrays are expected to produce enough energy to power 2,500 homes a year from atop capped landfills in Hauppauge and Holbrook.

“Solar is the way of the future,” said James Heil, the town’s Department of Environmental Control commissioner. “It’s all part of what we’re trying to do to be good stewards of the environment.”

Construction was set to begin on Monday at the landfill on Blydenburgh landfill, and equipment has already been set up at the one on Lincoln Avenue. At both, the mountain of trash is not visible, having been covered years ago with a plastic sheet membrane, grass and wildflowers because of environmental concerns.

The town is leasing the land for 20 years to Massachusetts-based solar energy company Agilitas Energy LLC for about $40,000 a year, Heil said.

Agilitas, which is expected to invest nearly $9 million in building the solar farms, will sell the energy produced to PSEG Long Island, officials said. It will also receive tax breaks through the Islip Town Industrial Development Agency.

Sandra Garren, director of sustainability studies at Hofstra University, said placing solar farms in landfills is a “win-win.” The farms repurpose land that is not developable and gives landfills another revenue stream.

“It is a common practice in places around the world, and it is a terrific idea for the landfills on Long Island,” Garren said.

Officials said they were seeking to repurpose the landfills. The Sonia Road landfill in Brentwood is used as a parking lot for hundreds of new cars under a lease with the West Islip-based Atlantic Auto Group, Heil said.

The Blydenburgh landfill was closed and capped in the 1990s as part of the U.S. Environmental Protection Agency’s Superfund program, which seeks to clean up hazardous sites. A small solar array was installed there in 2011 and powers facility buildings, officials said.

The project at the 39-acre Holbrook landfill — which has been closed since the 1980s and hosts the town’s recycling facility — must get Federal Aviation Administration approval before completion because of its proximity to MacArthur Airport, Heil said. According to FAA rules, the agency reviews solar farms because of possible glare and communication issues.

The town has been trying to find contractors for the landfill solar farms for about three years, Heil said, citing that deals with other companies have fallen through.

“It should’ve been up and running a year ago but I’m anxious to see it happen,” Heil said.

The Islip projects, totaling about 5 megawatts of energy production, are expected to be completed by October, according to Agilitas’ website and PSEG Long Island.

The Islip Town Industrial Development Agency on April 24 approved a deal to give Agilitas: