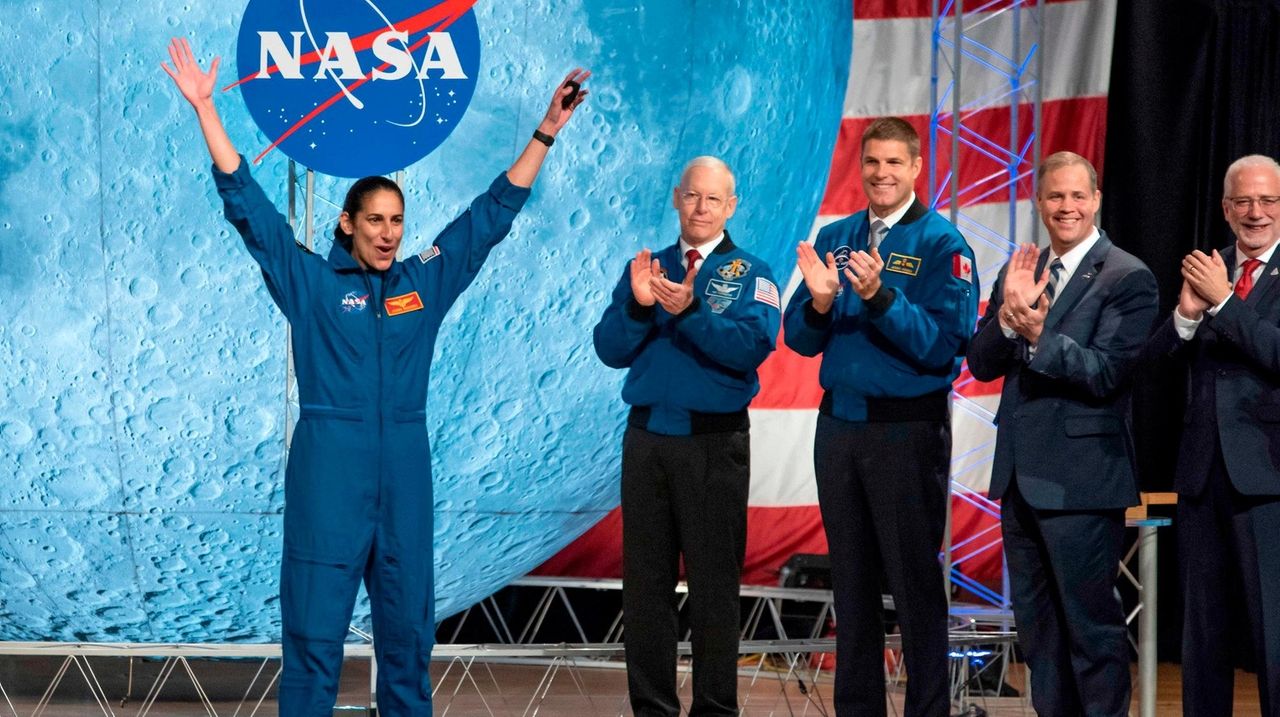 The fifth-graders of Lenox Elementary School gathered in the gym Friday morning to watch a livestream of NASA's graduation of the country's new team of astronauts, including former Lenox student Jasmin Moghbeli.  Credit: James Carbone; photos courtesy of NASA and Jasmin Moghbeli

The kids at the Baldwin elementary school lit up like a rocket as they watched a woman who had attended their school graduate Friday to become a NASA astronaut. But their excitement really blasted off when they got to video-chat with her afterward.

The fifth-graders of Lenox Elementary School gathered in the gym Friday morning to watch a livestream of NASA's graduation of the country's new team of astronauts, including former Lenox student Jasmin Moghbeli.

Moghbeli, who grew up in Baldwin, is part of the space agency's new Artemis program, which aims to place a man and a woman on the moon by 2024. So, she might well become the first woman to walk on the lunar surface.

Jaden Castillo, 10, of Baldwin, said that watching the former student, who first dreamed of becoming an astronaut while attending Lenox, fueled his own dreams of flying to the stars.

"I have to be good in school, and very determined in my life," Castillo said of his dream of becoming an astronaut himself.

Grand dreams went through his head as he watched Moghbeli graduate.

"I was thinking there she is in the Johnson Space Center, and here I am," said the boy attired in jeans, white Adidas sneakers and a T-shirt saying Lenox Class of 2020. "But one day I could be there where she is, talking to kids here."

Many Long Island students also watched a livestream of the graduation at the Cradle of Aviation Museum in Garden City. Oceanside School District’s Project Extra team, among those who watched the graduation, put together a mosaic using Rubik's cubes to portray an astronaut as a way to congratulate the graduating class.

Moghbeli, 36, was among 13 men and women chosen out of 18,000 applicants for the class, which lasted two years. Before that, she earned a bachelor of science degree in aerospace engineering at the Massachusetts Institute of Technology, and a master of science in engineering degree from the Naval Postgraduate School.

She is a Cobra helicopter pilot and Marine Corps test pilot, with over 150 combat missions.

Her dreams of space travel started at Lenox, Moghbeli told the 62 students in the gym. She did a sixth-grade book report on the first woman in space, Soviet cosmonaut Valentina Tereshkova. For the project, Moghbeli and her mother made a makeshift astronaut suit out of white windbreaker jackets.

Moghbeli urged the kids to dream big, and keep going when they face a failure.

"When I was a 6th-grader and said I wanted to become an astronaut, did everyone believe that I would one day do it? Probably not," she said, her image projected on a big screen in the gym. "You're going to fail at some point, but you just have to keep going."

The Lenox kids pulled out all the stops to honor their high-achieving alumna. Cheerleaders waved their purple and white pom-poms. A handful of kids sang the school song — "Oh Lenox, oh Lenox, we'll always be faithful to you." And everybody cheered when she spoke on the big screen.

Aaron Martin asked her who supported her the most as she strove to become an astronaut. She thanked her family, mentors and teachers, including those at Lenox.

Then Castillo asked his question: When will the newly minted astronaut return to Lenox and visit with the students?

"I will come back," she said, and then her answer was drowned out by cheering and applause.