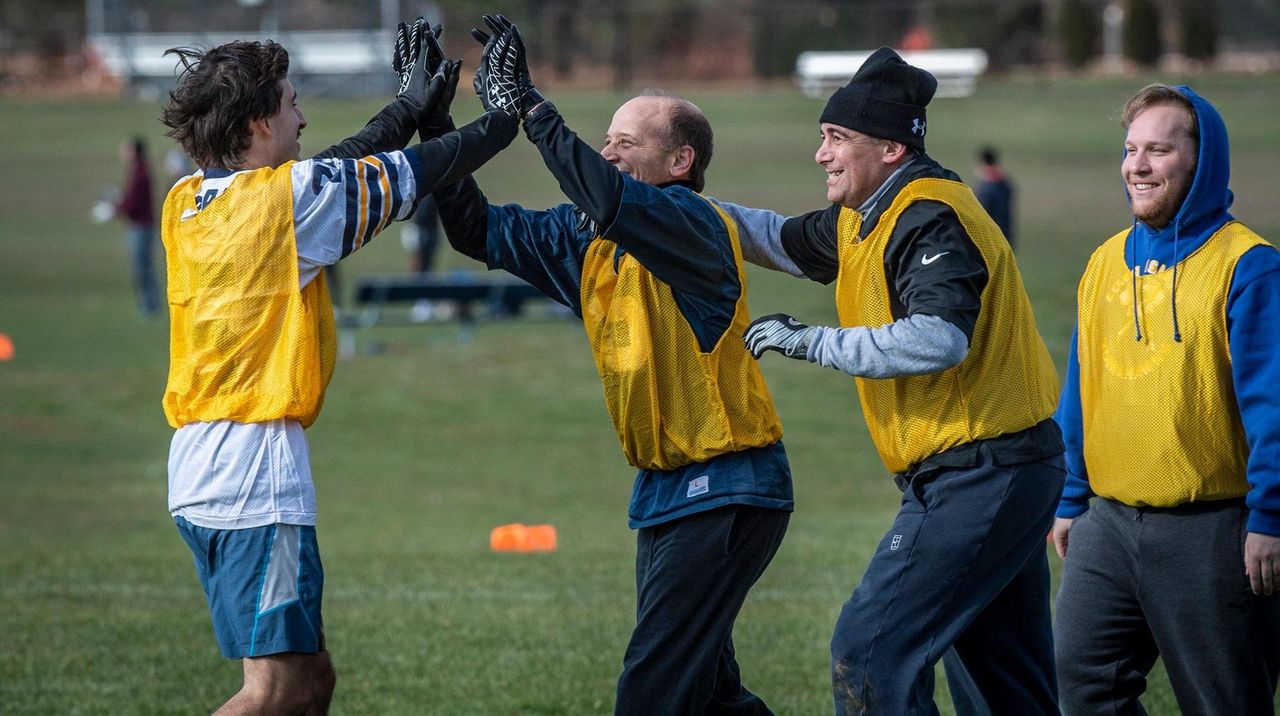 An annual Thanksgiving football game has kept one group of Jericho High School friends bound together over the 40 years since they graduated — ensuring that even while life has changed, their love for one another and excitement to be together has endured.

The group of 1979 grads, all in their late 50s, gathered Thursday for their 40th anniversary game at their alma mater, reuniting from across Long Island, New Jersey and Massachusetts. Armed with custom jerseys and bottles of scotch, they greeted each other in the parking lot with cheers, hugs and exclamations of “I love you, man.”

The men, including some who have been friends since their days at Cantiague Elementary School, described the tradition as “inspiring,” “special” and full of “camaraderie.”

“It’s such a rich, extraordinary community that we’re grateful for,” said Ken Greenblatt, of Woodbury.

The group began its cherished tradition on the first Thanksgiving after they graduated high school. Just as their lives have evolved over the years, so has the game.

The teams were originally Jews vs. Catholics. Then as they had children, their sons started playing, making it a tradition for them, too. When games of dads vs. sons became too unfair of a matchup, the teams became one family — father, brother and sons — against everyone else.

They’ve played through mud, snow and driving rain. They’ve returned after broken wrists and torn ACLs. Their wives sometimes watch from the sidelines and have become friends in their own right.

Some of the original members can no longer play because of injuries.

After six knee surgeries, Stavros Simon's playing days are over. Still, he drove from the Berkshires to stand on the sidelines, saying he would make the six-hour round-trip trek just to be there for 15 minutes. That’s because when he sees his friends' faces, he is reminded of “my fondest memories from childhood.”

“Until your memory is sparked by seeing them, you don’t get to relive that,” Simon said. “Everyone is intertwined.”

And, as happens over the decades, they have lost some friends. Volunteer firefighter and lawyer Glenn J. Winuk died when the south tower of the World Trade Center collapsed on Sept. 11, 2001. Alan Mendelsohn died of Addison's disease in 1989. The group had a park named in Winuk’s honor and started a scholarship fund in Mendelsohn’s.

But the focus of Thursday’s game was on being together. The men said they can share things with one another that they can’t with anyone else and they support each other through life’s ups and downs.

“It’s just a wonderful thing to see your friends from all those years back come and support you,” said John Ferrara, a CPA who lives in River Vale, New Jersey.

It’s a tradition that has caught on for the second generation. Greenblatt’s son, Andrew, started his own annual Thanksgiving game with his Syosset High School friends that is now in its 11th year.

“We decided we have to do this,” said Andrew Greenblatt, 29, who is from Woodbury but lives in Israel. “It was the joy of seeing everyone be so genuinely happy to see each other every year, no matter what’s going on in their lives.”

And as the game — Team Nathel Family, whose youngest member was age 10, against everyone else — wore on for two hours, the nostalgia flowed. The men on the sidelines reminisced about playing tackle football together at the age of 8, trying alcohol for the first time together at age 12 and sometimes taking their parents’ cars without their knowledge. At the end of the 6-2 game, the players declared everyone a winner.

The men will meet again in the winter for an “awards dinner.”

No awards are given out for their playing, but it’s an excuse to get together again and drink bourbon.