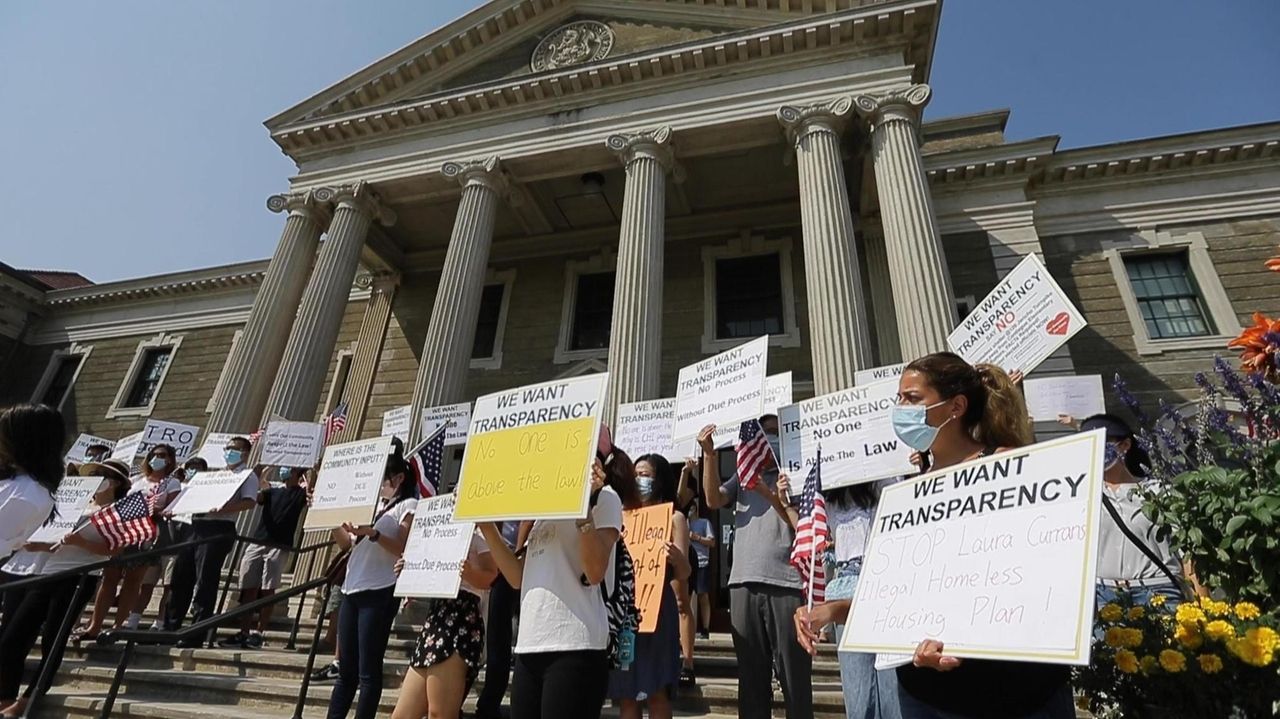 Residents and elected officials called for transparency after they said they were left in the dark about a plan to house 80 homeless families at the site of a former hotel in Jericho. Newsday’s Cecilia Dowd has the story. Credit: Howard Schnapp

Nearly 100 homeowners rallied Tuesday in Mineola against a plan to convert a Jericho hotel into a temporary shelter for homeless families, arguing the project lacked public transparency and vetting and was a poor use of state funds.

But supporters say the project will help move 80 families from three Jericho motels into more stable housing that will provide them with three meals per day, child care, security and job training.

The former Hampton Inn hotel, located in a business district on Jericho Turnpike, would be operated by Community Housing Innovations Inc., a nonprofit with offices in White Plains and Patchogue.

But local homeowners and lawmakers said they were kept in the dark about the proposed Jericho Family Support Center until conversion of the property was already underway. During Tuesday's protest they carried signs reading "No Process without Due Process" and "No One is Above the Law."

Jennifer Vartanov, a member of the group Concerned Jericho Parents, noted that there were no traffic, safety or environmental studies performed on the shelter facility. "There has been an absolute lack of transparency throughout this process," said Vartanov, of Old Westbury.

Legis. Rose Marie Walker (R-Hicksville), chair of the Health and Human Services Committee for the Nassau Legislature, argued that "these safeguards are put into place to keep our communities safe and our residents out of harms way."

But Kyle Rose-Louder, Nassau's deputy county executive for Health and Human Services, defended the project. She said the county was presented with an opportunity to move families out of motels, where they receive no public services.

"The opportunity was there. And we made the best choice to take that opportunity and run with it," she said.

The Town of Oyster Bay sued 120 Westend LLC, the new owner of the property, alleging that converting the property into a shelter would violate zoning codes. State Supreme Court Justice Arthur Diamond issued a temporary restraining order halting construction and preventing the property from being used for transitional housing.

Alexander Roberts, executive director of CHI, which operates 30 shelters in Nassau and Suffolk, said the project is immune from local zoning laws as the regulation of homeless facilities is preempted by the state.

"The primary obligation of the county and the state are to make sure that children are safe and that people are educated," Roberts said. "We are bringing in a rich menu of services that will move homeless families within 6 to 9 months, on average, into permanent housing."

County Executive Laura Curran said in a statement that the county is state-mandated to provide emergency housing for homeless residents.

Paula Geslani is among the Jericho residents supporting the plan. She contends the protesters are displaying a lack of empathy toward individuals down on their luck and in need of help.

"They are using zoning code violations as an excuse to commit a crime against humanity," Geslani said. "It's kicking people when they are down and then kicking the person who is trying to help them get up."

Westend is charging CHI $120 per day for each room, below the market rate, Roberts said.

Critics contend the project, which is being funded by the state, is cost-prohibitive. CHI pays Westend $3.5 million per year in rent, growing to $3.7 million by the end of the 10-year contract.

"The amount of money being spent in this COVID age, when money is scarce, is staggering," said Marc Albert, an attorney from Jericho. "This whole thing stinks."

Assemb. Michael Montesano (R-Glen Head) said the money could be better used to find homeless families permanent housing. "While some of this is well meaning and these people are in need of housing and in need of social services help there is a smarter way to do it financially," he said.