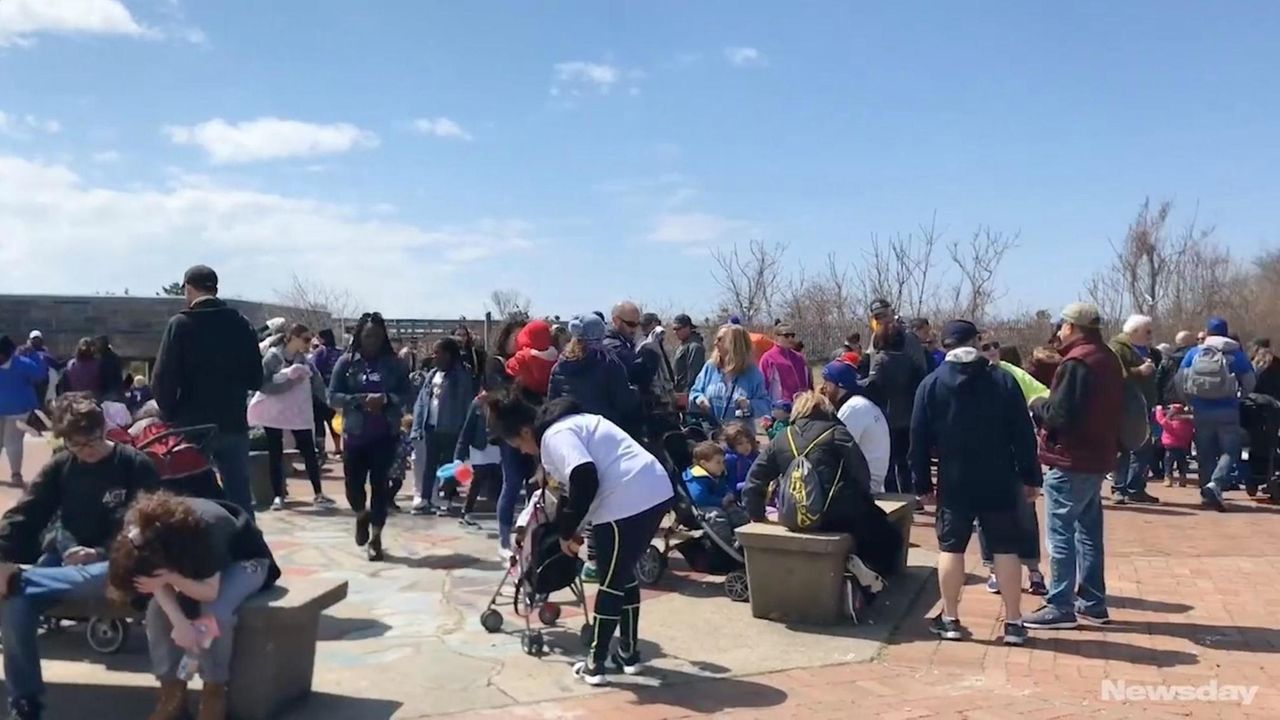 Thousands of people took to the boardwalk at Jones Beach on Sunday to raise funds for premature babies and their families. The March of Dimes' March for Babies raised more than $500,000. Credit: Newsday / Christine Chung

Pint-sized marchers took to the Jones Beach boardwalk Sunday morning to raise awareness and funds for premature babies and their families.

Thousands of people, many with strollers in tow, walked a 3-mile route at the annual March for Babies, which raised more than $500,000, organizers said. The event, nonprofit March of Dimes’ largest annual fundraiser, was one of 400 walks that took place across the country Sunday.

Most participants wore T-shirts printed with the names and faces of loved ones born prematurely, often weighing only a few pounds. Parents chased down adventurous, healthy children once isolated in hospital neonatal intensive care units for months, with every day a battle to stay alive.

Ed Scott, 47, and Shari Scott of Bellmore attended the march with their two children. Nine years ago, their daughter Allison Hope was born at 26 weeks, weighing just over 2 pounds. The three months she spent in the NICU were a “roller coaster” characterized by constant uncertainty. Her parents described her as “truly a fighter.”

“The more you talk to people, the more you connect . . . It’s not an easy time,” Shari Scott, 43, said. “We hope that one day all babies will be born healthy and strong.”

A premature birth is one that occurs three weeks or more before the baby’s due date, and each year about 380,000 babies are born prematurely, according to March of Dimes. About one out of every 10 babies was born prematurely in 2016, according to the Centers for Disease Control and Prevention. A child’s brain, lungs and organs fully develop in the final weeks of pregnancy, making premature birth a factor in higher rates of death and disability.

Many babies Sunday had beaten these odds. Sami Brooke, now 8 years old, born weighing 1 pound and 11 ounces, was a “miracle baby” said her grandparents Janice and Ken Raymer of Bay Shore. They said Sami, their first grandchild, was “perfect.” With $22,644, the Raymers had raised the most of all family teams on Sunday.

PSEG Long Island, the top supporter of the march, raised more than $40,000 and had a team of more than 1,000 employees and their families attending.

Since 1970, March of Dimes, a national nonprofit with a mission of improving the health of mothers and babies, has raised more than $2.5 billion to work to prevent preterm birth with increased research, programs and education. The nonprofit’s dedicated NICU family support program aids families who have newborns in the hospital.

When 37-year-old Stacey Pino-McCoo had her son Alexander last year, his premature birth was “like an emergency” and “very traumatic” but the hospital staff was there for her.

“They tell you that your baby is going to be OK. Thankfully, he is doing so well and he is healthy and happy,” said Pino-McCoo, of Long Beach. “It’s not the best beginning . . . but, it’s a happy future.”