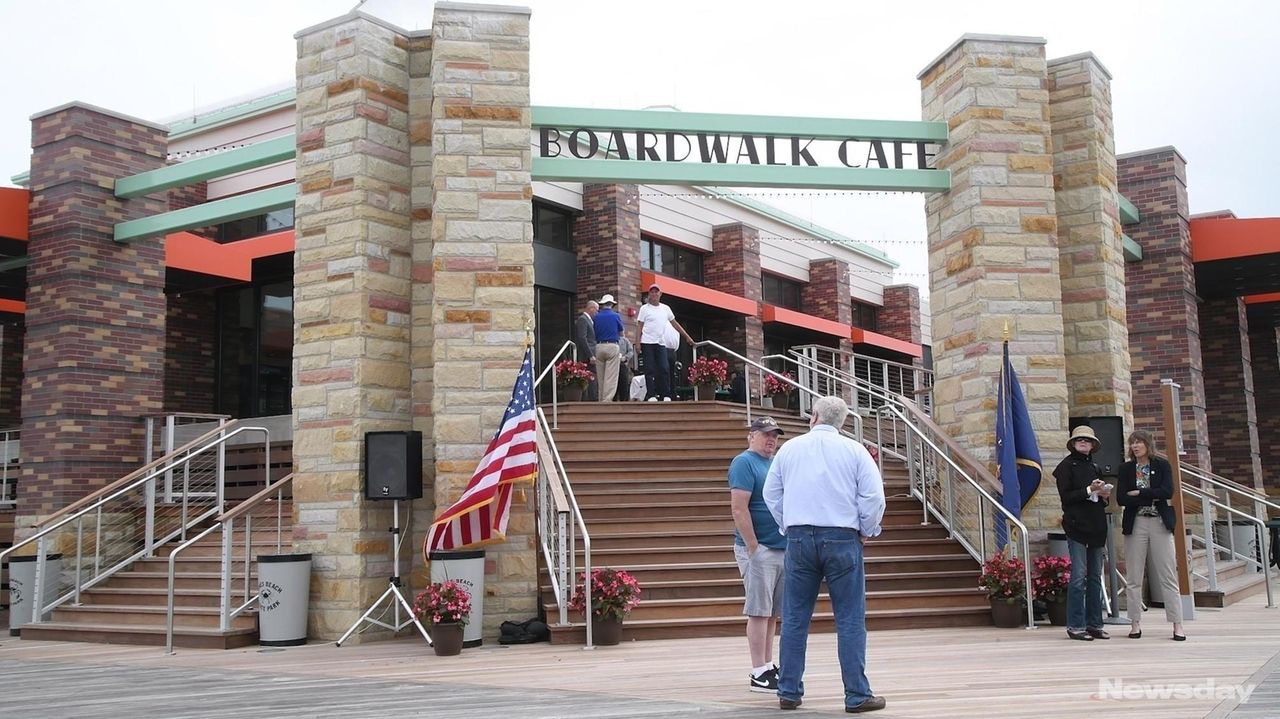 Rose Harvey, commissioner of the state Office of Parks, Recreation and Historic Preservation on Friday marked the reopening of The Boardwalk Cafe — closed since 2004 — at Jones Beach State Park with a ribbon-cutting ceremony.    Credit: Newsday / J. Conrad Williams Jr.

Visitors to Jones Beach State Park have a new place to go to whet their appetites with Friday’s official reopening of the Boardwalk Cafe, featuring traditional fare, from salads and rice bowls to panini and hamburgers.

And let the games begin again, as the splash park along the boardwalk also has been finished.

“We’re really trying to restore the history, majesty and glory, and introduce recreational activities, food and dining opportunities tailored to the 21st century,” Rose Harvey, commissioner of the state Office of Parks, Recreation and Historic Preservation, said after the cafe’s ribbon cutting.

The improvements include restoring the West Bathhouse, upgrading bathrooms and the western play area with boccie, cornhole, and shuffleboard, restoring original details such as Central Mall mosaics, and rebuilding infrastructure. Coming upgrades include landscaping, lighting, and new games for the western section. The miniature golf course, which honors a number of state parks with holes replicating their signature features, will remain.

A fire destroyed the original Beaux Arts Boardwalk Cafe in the 1960s. Closed since 2004, the restaurant “has been a hole in the ground,” that symbolized what needed to be done, Harvey said.

Its reopening was delayed by damage from superstorm Sandy in 2012, which led the state and then-developer Donald Trump to cancel his contentious plan for a much larger, more upscale restaurant.

The new $18 million building was designed to withstand hurricanes. It sits on 52 12-inch steel piles that were drilled 45 feet into the ground, and another 32 16-inch steel pipe piles driven 31 feet down, according to Syosset-based construction manager The LiRo Group.

The $2.8 million splash park is 2,000 square feet with 20 sprayers at 85 gallons a minute, the firm said. No additional fees are charged for it or other games.

“It’s a good way to cool down in the summertime,” said Sal Grasso, a project manager with the firm.

Looking ahead, Harvey said the parks department has begun studying phasing out plastic, through administrative steps and vendor contracts it will sign in the future.