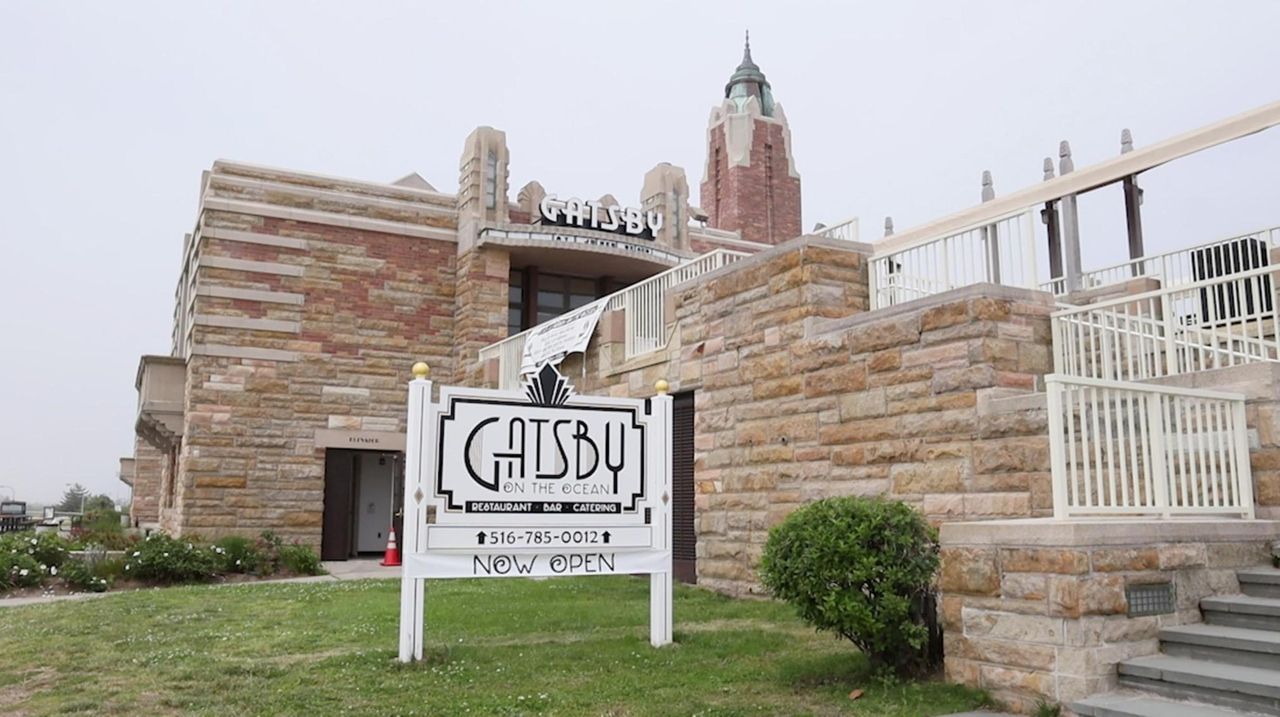 Gatsby on the Ocean, the oceanfront dining venue at Jones Beach, officially opened to the public Friday. The newly renovated former Marine Dining Room at the West Bathhouse was converted into a restaurant, bar and catering facility.  Credit: Newsday / Alejandra Villa Loarca

Cocktails in bathing suits anyone? Jones Beach State Park now welcomes swimmers and the more formally attired to the terraces on the West Bathhouse’s second floor, as well as to the new restaurant designed to evoke the mischievous glamour of the Roaring Twenties.

That was an era master developer Robert Moses knew well; he opened the Marine Dining Room in 1931, now home to “Gatsby On The Ocean,” two years after finishing the expansive Beaux Arts park in Wantagh that celebrated the public — and has been celebrated by the public ever since.

The Marine Dining Hall, with its soaring ceiling, featuring a skylight and buttressed by wide, dark wood beams, two summers ago was returned to its original grandeur by removing what the nonprofit Preservation Long Island delicately called “insensitive alterations.”

Those modifications included slicing the 5,500 square foot space in two and hiding the skylight and beams under a dropped ceiling. By 2004, a Friendly’s restaurant served customers there, the group said.

Disappointed by the performance of the first concessionaire it chose for the former Marine Dining Room, the parks department brought in J & B Restaurant Partners, whose president, Joe Vitrano, said he immediately hit on the Gatsby theme when he walked in. Attempts to reach the previous concessionaire, The Landing, were not immediately successful.

The office formerly used by Robert Moses has been turned into a bride’s dressing room; its balcony, overlooking the Atlantic, might prove an appealing backdrop for photographs, officials said.

Across the hall, the conference room Moses used was reimagined as a groom’s area. Overlooking the pool, it includes a bar.

As part of Gov. Andrew M. Cuomo’s plan to invest $900 million of public and private funds in state parks over 10 years, Jones Beach has been undergoing $65 million of renovations.

Though the East Bathhouse has been closed since 2009 due to budget cuts, visitors can look forward to other attractions, including a zip line that should open this summer. Improvements for the West Games area, that include adding pickleball and restoring the miniature golf course, known for its Long Island landmarks, should begin this autumn.

Depending on the weather, the Gatsby, which opened on Memorial Day with a limited menu, will try to stay open throughout the year, Vitrano said, partly by offering St. Patrick’s Day and Super Bowl parties, for example, as well as serving as a catering hall for everyone from brides to corporate executives.

Looking around at the “spectacular location,” he said, “We are proud to be the caretaker.”

Gatsby On The Ocean, now open for dinner, plans to add lunch shortly.

2:29 Looking back one year, 'I see that I am one of the lucky ones'
2:15 Cuomo: NY pushing toward reopening, agreeing to limit COVID-19 powers
Alzheimer's Association hosting free virtual seminar on legal, financial planning
Third COVID-19 vaccine arriving in NY as soon as today
Wantagh High closed after new virus cases surface
Suffolk lawmakers approve new aquaculture leases, rules
Didn’t find what you were looking for?