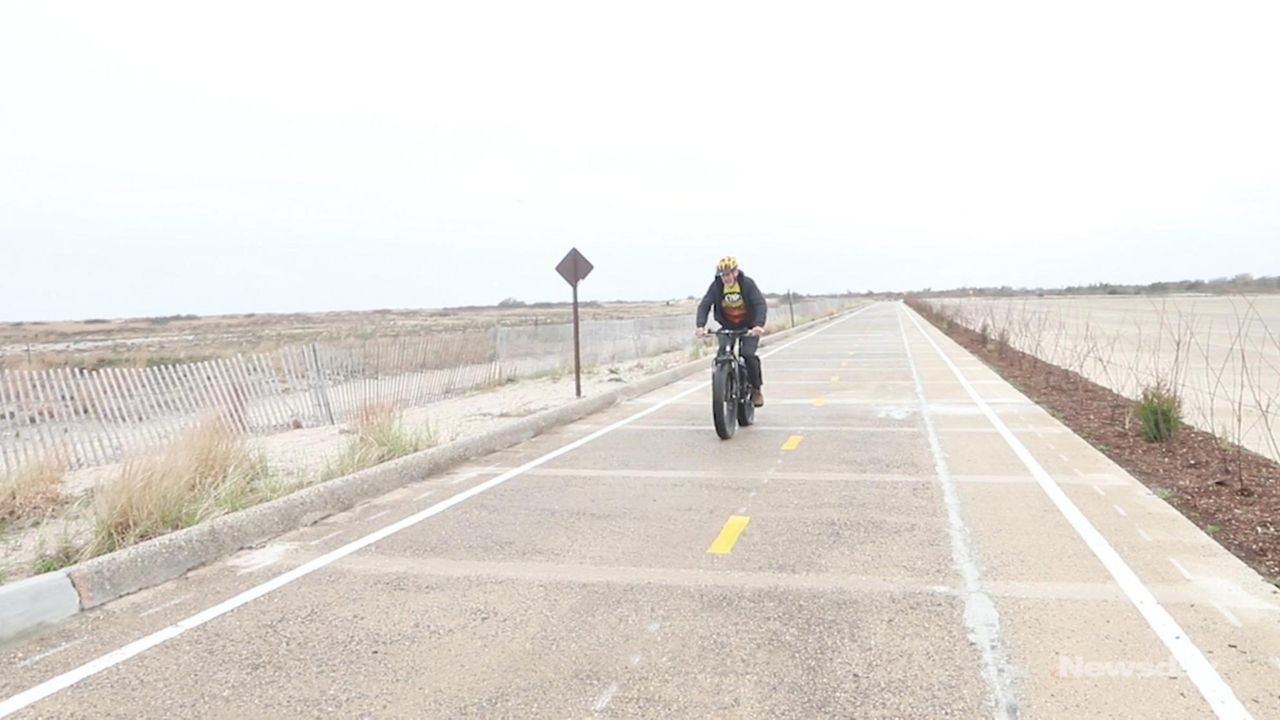 On Friday, Lt. Gov. Kathy Hochul announced the opening of an expansive new bike trail at Jones Beach that will provide riders and walkers with exquisite views of the Atlantic Ocean. Credit: Linda Rosier

Setting out on bikes, officials on Friday defied an overcast sky and a cold wind to open a trail through the west end of Jones Beach State Park — while pledging that area will forever remain in its natural state.

The 4.5-mile, $3.5 million trail was completed half a year ahead of schedule, and complements the 20-plus miles of trails the state Department of Transportation has built in the past few years, Gov. Andrew M. Cuomo said in a statement.

Later this year, work will start on a new 10-mile trail for walkers and runners and people who roll on wheels that will take them from the Town of Oyster Bay’s Tobay Beach through Babylon to Captree Island in the Town of Islip.

"We are making historic investments in our parks and transportation infrastructure," Cuomo said, "and this path will give New Yorkers another great place to exercise and take in Jones Beach's unparalleled views."

Marrying Art Deco with the grand layout of centuries-old palace gardens in Europe, master developer Robert Moses clustered some of the 90-year-old Wantagh park’s best-known buildings — the theater, the bathhouses and the water tower, a 20th-century version of the campanile of St. Mark’s Cathedral in Venice — in the middle of the 6.5 mile-long beach.

The park’s western 218.5 acres were almost entirely undeveloped; aside from stunning scenery, one of the area’s main features was the outdated nature center, which is being replaced with a larger Energy and Nature Center to inform visitors about sustainable energy in addition to the local flora and fauna.

Lt. Gov. Kathy Hochul on Friday signed a proclamation that holds future generations responsible for protecting all of the west end's “unique, rare, threatened or endangered species,” and limit development to so-called passive recreation, such as hiking, fishing and birding.

By 2020, parks around the state should have undergone $1 billion of public and private investments; about $50 million was set aside for Jones Beach, where the new Boardwalk Café opened last year and a multitude of minor and major improvements, from fixing broken tiles to overhauling dilapidated bathrooms, have been completed.

The list of works-in-progress includes demolishing the 1953 Meadowbrook toll plaza that has not been used for two years, as parking fees now are collected at the fields.

On the new path, exercise- and view-seekers can travel west from Field 6 along the boardwalk to the site where the new $18 million center should open next year.

“What other location allows you to see the New York skyline and the Atlantic Ocean's white caps, with just the turn of a wheel?” said Joseph Brown, state Department of Transportation’s Long Island regional director.

Hochul said the new trail could have been built decades ago, “but nobody had the vision … to make it happen.”

Dismissing the biting breeze by noting that two days ago she was biking in her native Buffalo alongside ice floes, she added the new path “also links us here to literally hundreds of miles of trails” in the region. “And that’s what people want, quality of life.”

The network of trails serves long-distance bicyclists as well as young families with children just learning to ride, as it is flat and car-free, noted Richard Schielke, 64, of Massapequa.

And, Michael Vitti, 62, of Glen Head, president of Concerned Long Island Mountain Bicyclists, an advocacy group, said, “What could be better than a bike path along the ocean?”