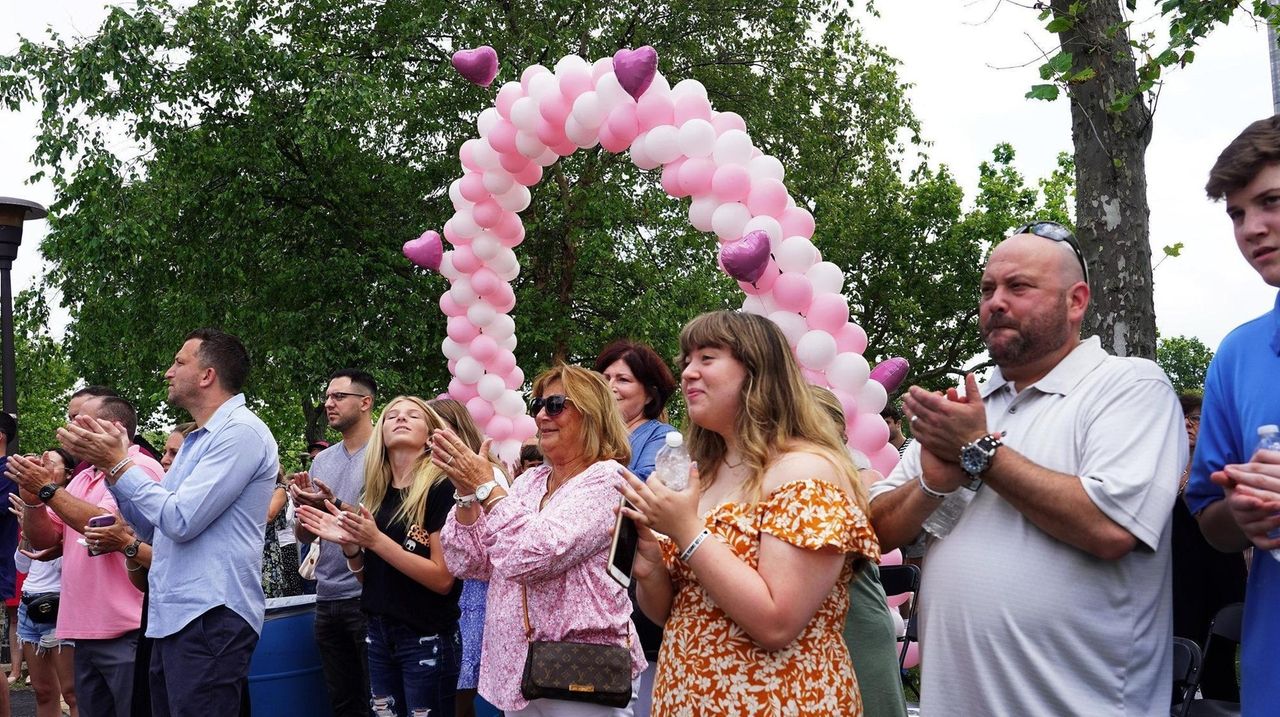 Family and friends gathered at Grant Park in Hewlett on Saturday to unveil a memorial in honor of Kelly Ann Tinyes, a 13-year-old Valley Stream girl who was murdered by her neighbor in 1989. Credit: Debbie Egan-Chin

Jennifer Cohen said Kelly Ann Tinyes came to her in a dream a few years ago.

Kelly, a 13-year-old Valley Stream girl who was murdered by her neighbor in 1989, was alive, smiling and back home, "singing, dancing, flipping her hair like she always did," Cohen said — and asking for her childhood friends to build her a memorial for family and friends.

Now, 32 years after Tinyes' death, that memorial is a reality. It was unveiled Saturday at Grant Park in Hewlett, where about 100 of Kelly’s family and friends gathered to celebrate the Woodmere Middle School eighth-grader’s life, which was cut short two days before her 14th birthday.

"This was Kelly’s favorite place to be," Cohen said. "It’s so peaceful and relaxing by the lake watching the swans and the ducks."

Cohen said that when she told Kelly’s family that a memorial was being planned, they started to cry and said, "We finally need something to be positive."

In March 1989, police found Kelly’s body wrapped in a sleeping bag in a neighbor’s basement after she had been strangled, stabbed and sexually mutilated. Her killer, Robert Golub, took responsibility for her death more than 20 years later when he claimed he murdered her in a steroid-induced rage. He was sentenced to 25 years to life in prison.

Richard Tinyes Jr., Kelly's brother, said that every two years, when Golub becomes eligible for parole, is a harsh reminder of the family’s loss. Golub is eligible again in November and is appealing his conviction.

"It’s important in keeping her memory alive. The person who killed Kelly is still eligible for parole," Tinyes said. "You have no idea what it does. It’s all very hard on myself and my mother is in tears every day."

Tinyes said it was a relief to be there Saturday, and that he has been waiting for this moment to remember her. He was 8 years old when Kelly was babysitting him before she was called to Golub’s house more than 30 years ago.

He said the memories are still vivid — like when Kelly would play tricks on the neighborhood kids by playing the Mister Softee jingle, although no truck was waiting outside.

But a Mister Softee truck was there Saturday serving cones.

"I want everyone to celebrate her life and recognize who she was and people adored her," Tinyes said. "She was just a kid. She was taken so abruptly, we never had time to talk about the future."

Friends created a foundation called "Forever Young Kelly," to raise nearly $50,000 for the memorial, including an engraved plaque on a plaza leading to Grant Pond that was decorated Saturday under an arch of pink balloons.

A ceremony included speeches and singing "Forever Young" and "Over the Rainbow."

Nassau County Executive Laura Curran told the crowd that the case was one of the first solved using forensic evidence, and that Kelly Tinyes’ legacy helped generations of solving cases for crime victims.

The case was reopened in 2009 to look for evidence linking additional suspects, but no further arrests were made.

Nassau County Police Commissioner Patrick Ryder, also on hand Saturday, said that back in 1989, he was assigned to watching the crime scene on Horton Road. He said detectives collected evidence to convict Golub and ensure he remains in jail.

"It’s important we give all our victims a voice and never forget them," Ryder said. "We start to understand and own our victims and do the right thing to remember them."