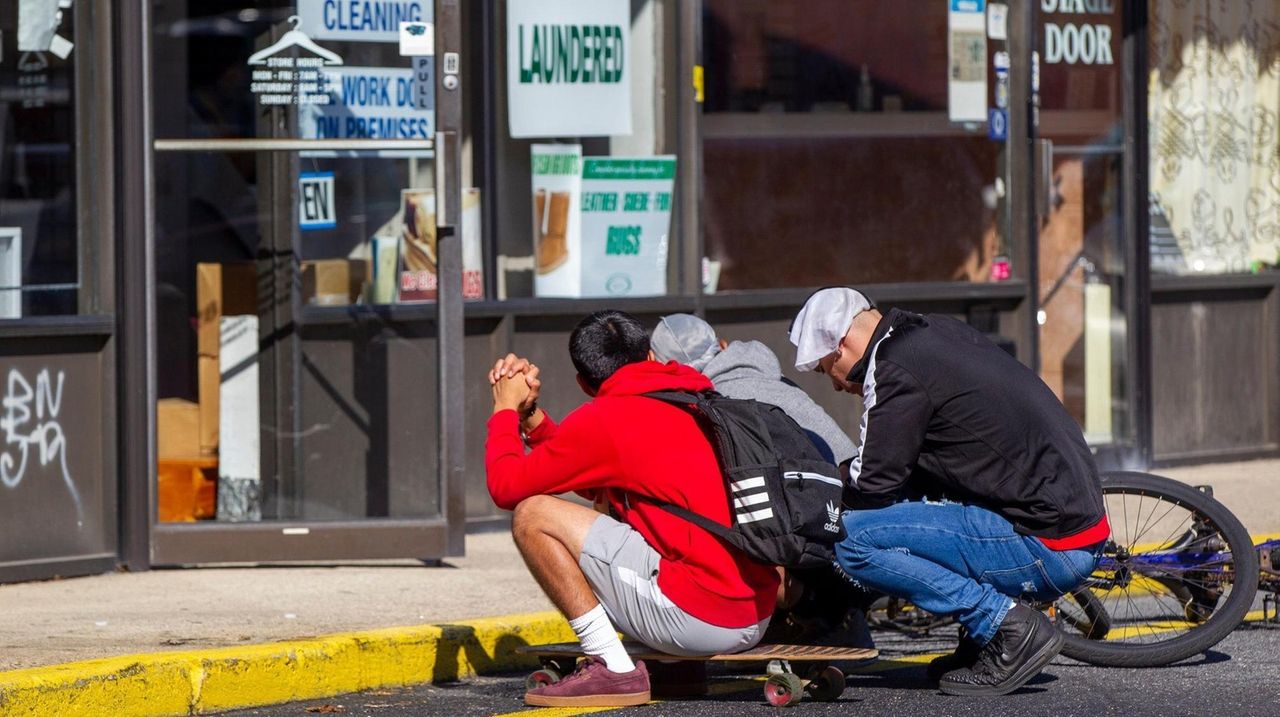 Keyanna Morris on Tuesday urged the assailants who fatally stabbed her brother Khaseen Morris on Monday to turn themselves in. A candlelight vigil was held Tuesday at the crime scene in the parking lot of an Oceanside strip mall. Credit: Newsday / Steve Pfost; Howard Schnapp

Morris, who would have turned 17 next month, was a skilled artist who drew animé. He wrote his own music. His favored mode of transportation? His skateboard. He dreamed of studying photography.

"He always said he wanted to be a rock star," said one of his sisters, Kedeemah Morris, 22.

Khaseen Morris was fatally stabbed at an Oceanside strip mall Monday afternoon by a group of six or seven assailants in an apparent dispute over a girl, police said.

He and his parents, two sisters and brother had moved over the summer from their hometown of Freeport to Oceanside. Khaseen Morris saw it as a "fresh start" from some of the constraints he felt at school in Freeport because of his individualistic style and varied interests, said his oldest sister, Keyanna Morris, 30.

You couldn't put him in a box, the sisters said. He listened to rap, rock and punk music, often blaring from a speaker as he rode on his skateboard. He dyed half of his hair a fiery orange. His personality was described as “bubbly” and “loving.”

"When he came here,” Keyanna Morris said of Oceanside, “he was able to be his kind of different with no judgment and he loved it. The moment he stepped foot in Oceanside, everyone loved him."

She recalled him coming home from school and exclaiming with a huge smile plastered on his face: "I made so many friends!"

Anthony Frangos, 19, a former Oceanside High School student, was one of Morris’ friends who gathered at the strip mall Tuesday, grieving for the life lost.

“He was a good guy, chill,” said Frangos.

Khaseen Morris had a strong bond with his 2-year-old nephew Karter, the son of Keyanna Morris. She described them as “best friends,” but now she said she’s struggling to explain her brother’s absence to her young son.

Even as the sisters cried while speaking about their brother’s violent death, they took solace in their memories of him.

On Friday, Keyanna Morris said, he had told their mother: "'This is the happiest I've been in so long.’ ”

Teens recorded fight instead of helping, police sayKhaseen Morris, 16, was fatally stabbed in a melee at the parking lot of a strip mall, authorities said.