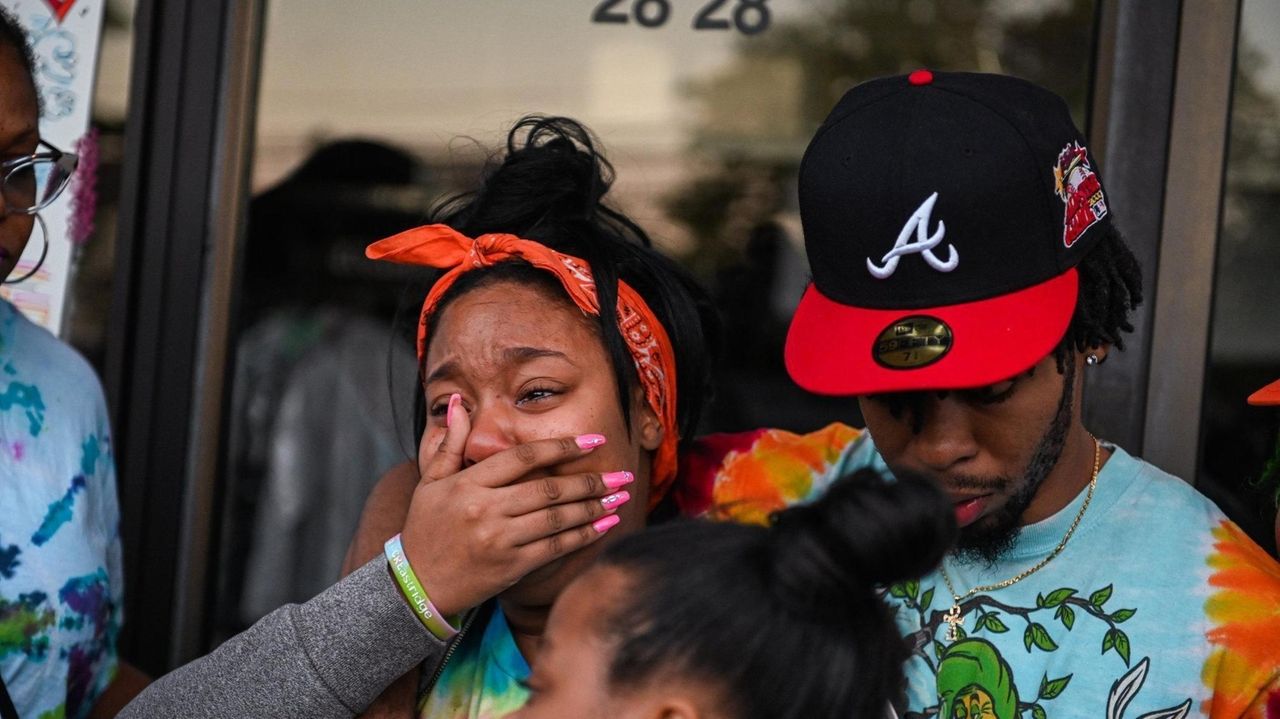 Hundreds mourned Khaseen Morris, 16, at a vigil Wednesday evening in the Oceanside strip mall parking lot where he was fatally stabbed during a fight on Monday. Credit: Newsday / Steve Pfost

At the Oceanside strip mall where an assailant stabbed her younger brother Khaseen to death two days before, Keyanna Morris urged hundreds attending a vigil Wednesday night to remember him for his energetic, upbeat view of life.

She told them not to be sad. Khaseen wouldn’t want them to be sad.

When she started talking about how Monday's attack on her brother unfolded — Khaseen bleeding profusely from a stab wound to the chest with some onlookers choosing to capture the chaos on their smartphones instead of coming to his aid — Keyanna Morris sobbed uncontrollably for minutes on end.

Morris' plaintive mood mirrored that of the more than 300 mourners who turned out for the vigil, which started just hours after Nassau police announced the arrest of an 18-year-old Lido Beach man on a murder charge in connection with her brother's death.

The crowd gathered outside a cleaner and tailor business in the mall's parking lot.

They stood around a growing memorial to Khaseen. Most were teenagers — some close friends, others who just knew Khaseen from passing him in hallways of nearby Oceanside High School, where he had recently begun his senior year.

Many brought glass candles to add to the dozens already there — the flickering lights illuminating a white wooden cross with “Khaseen” written on it, and black and red hearts drawn in the middle.

Photos of a smiling Khaseen — with “#JusticeforKha” and “Long Live Kha” written nearby — were mounted above flowers that mourners placed against a storefront wall and window.
Many, including his older sister, wore tie-dyed shirts in his honor. Family members said he preferred colorful clothes like tie-dyed shirts.
“He was the whole family’s joy,” Keyanna said. “He was our energy. He lit up every room.”

She told the crowd that Tyler Flach had been arrested and charged with the killing of her brother. But she also said the arrest was just the beginning of efforts to track down other youths police and witnesses said took part in the attack on Khaseen and a friend who suffered a broken arm.
“We’re still going to fight for everyone to get caught that was involved, too,” she said. “They’ve all got to go down. We’re not going to stop until they all go down for this.”

Khaseen’s mother, Ann Morris, 48, attended the vigil but didn’t speak. At one point, Ann Morris became so distraught that she walked away from the crowd to sit on a curb and sob. Family and friends trailed behind and put their arms around her.
“They took my baby,” she said through tears after standing up, as Imani Thompson, 21, of Farmingdale, a stepsister of Khaseen, hugged her tightly.

“That was my baby," she said. They took my baby.”
Khaseen’s maternal aunt, Kameel Gayle, 50, of Freeport, in whose house she said Khaseen’s family had lived before moving recently to Oceanside, said the hundreds at the vigil illustrated how well-liked Khaseen was and how “everyone was drawn to him.”
Gayle said she talked with some of the young people who were in the parking lot on Monday and they told her “they couldn’t help because there were machetes, knives and guns.”

Nassau police said 50 to 70 youths were at the parking lot at the time of the stabbing, which they said stemmed from a perception — incorrect, Keyanna said — that Khaseen was dating a girl who may have had a relationship with one assailant.

Several students later circulated footage on social media, including Snapchat, of a bleeding Khaseen lying in the parking lot.

On Tuesday, Nassau Det. Lt. Stephen Fitzpatrick urged teens who were involved or at the scene to come forward with their version of events.

Later Wednesday night, Keyanna Morris sounded astonished as she said those who filmed the mayhem "all ran off."