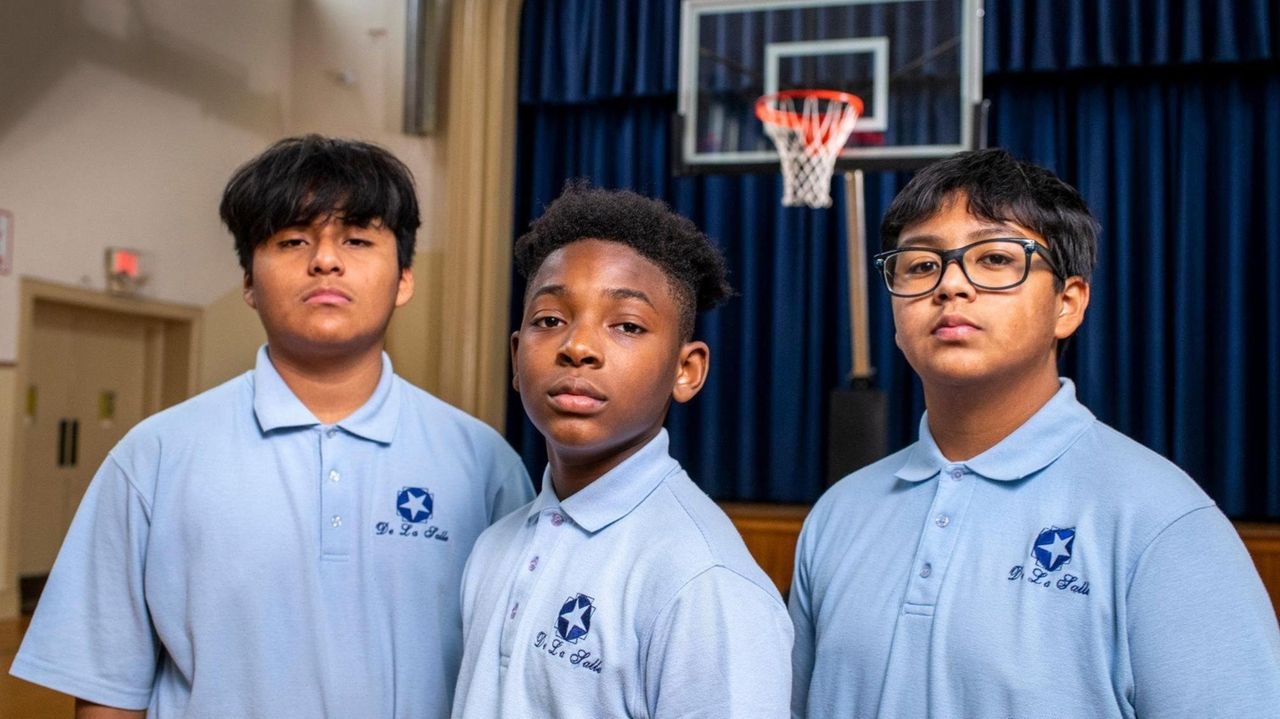 In March, Ian Codio, Jose Munguia and Humberto Guevara, 7th-graders from The De La Salle School in Freeport, interviewed Kobe Bryant at a Manhattan bookstore for Kidsday, where the NBA great was promoting his book, “The Wizenard Series: Training Camp,” On Monday, the boys talked about how that meeting has changed them forever. Credit: Corey Sipkin

When Ian Codio, Jose Munguia and Humberto Guevara learned that Kobe Bryant died Sunday in a helicopter crash near Calabasas, California, the seventh-graders at The De La Salle School in Freeport said it felt like they had lost a close friend.

The middle school students interviewed Bryant at a Manhattan bookstore in March for Kidsday, but Monday they said he gave them more than just a story — the Los Angeles Lakers legend inspired them to work hard and pursue their passions.

Principal Jeanmarie Becker said Jose, along with Ian and Humberto, both 12, were chosen to interview Bryant at the Barnes & Noble in Union Square, where he was promoting his book, “The Wizenard Series: Training Camp,” because of their love of sports.

“I started to play basketball because of him,” Ian said. “He’s the reason why I take basketball so seriously. He had such a good work ethic. I try to model my game after him.”

De La Salle students come from poor, struggling families, Becker said, and the meeting with Bryant gave the boys — along with Alan Turcios, who is no longer a student at the school — a glimpse of what is possible through hard work.

“I wish Kobe knew how much he touched their lives and the impact he had on them,” Becker said.

The boys were so excited as they traveled to Manhattan for the interview that they were bouncing off the walls of their Long Island Rail Road car, teacher Christina Buttigieg said. By the time the junior journalists were whisked into a private room at Barnes & Noble to interview the NBA superstar, Ian was so nervous he began hyperventilating.

Bryant immediately made the boys feel comfortable as he talked about taking advantage of the opportunities life presents, overcoming challenges and trying to be a good father to his children.

“He was a really down-to-earth person,” Humberto said.

When the interview ended, Ian whipped off the Lakers jersey he wore. Kobe had touched it, he said, and he wanted to preserve the moment.

The boys also said they refused to wash their hands — the hands that shook the hand of the basketball great — for several days after the interview.

Meeting Bryant, said Becker and Buttigieg, will remain with the boys forever. Ian wrote Becker an email before school resumed in September telling her this was going to be his year, and that he would work harder than ever. Jose started exercising regularly and eating healthy food. Humberto, once a shy, quiet student, has become more assertive.

Bryant’s death hit the boys hard, Becker said. Ian, Jose and Humberto spent a lot of time in her office Monday talking about Bryant’s storied NBA career and how they felt about his passing at age 41.

“It was hard on them, and it was hard on the world,” Becker said. “But for these young men who had that special time, it was a blessing. I think they are feeling special.”

Bryant to LI kids: 'Get better every day'Kobe Bryant wore No. 24 during half of his storied professional career because, he said in a Kidsday interview published last month, it reminded him that time and life are precious. Kobe Bryant, 1978-2020: Full coverageNBA legend Kobe Bryant, his daughter and seven others were killed in a helicopter crash in Southern California, his sudden death at age 41 touching off an outpouring of grief for a star whose celebrity transcended basketball.