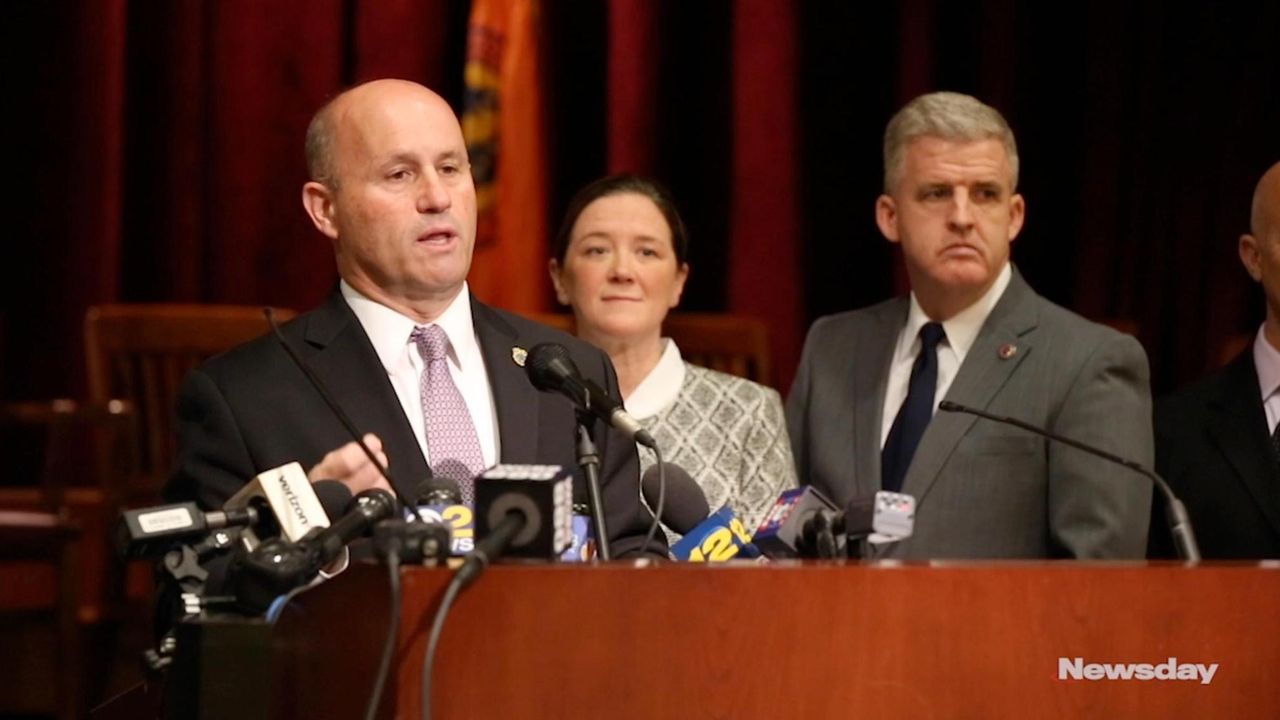 The Nassau County Police Department announced on Wednesday it will equip the force with iPhones loaded with LanguageLine - an app that will allow officers to communicate with residents in hundreds of languages as well as with hearing impaired and deaf individuals. Credit: Howard Schnapp

The Nassau County Police Department began Wednesday its rollout of “LanguageLine”  translation services in patrol vehicles and plans an “imminent” expansion of the program to other officers and units, officials said.

The language service is already available in police precincts, headquarters and other buildings. The addition to the department’s patrol force allows officers out in the community to speak with residents in their native tongue, officials said.

“This is community policing on steroids,” Police Commissioner Patrick Ryder said in a news conference Wednesday at Mineola headquarters.  “When a cop is on the street, he doesn’t have the availability of a translator.”

The LanguageLine is an app  on department iPhones where officers can make audio or video calls for translation services in more than 350 languages, including American Sign Language. The program costs roughly $350,000 over three years and was paid for by asset forfeiture funds at no cost to taxpayers, Ryder said.

There will ultimately be more than 650 cellphones throughout the department with the language line app, said spokesman Det. Lt. Richard LeBrun.

The force’s 177 patrol vehicles will get the cellphones first, followed immediately by officers in specialty units and the administration staff — including Ryder himself.

County Executive Laura Curran touted the expansion of the program at the news conference, which featured video demonstrations of the app in Spanish and sign language as well as sign language interpreters from the Mill Neck Interpreter Service.

“It’s one other way that we’re proving that every single person in Nassau County, in our growingly diverse county, will be respected and will be protected,” Curran said.

Ryder said officers most often need to communicate with residents who speak Spanish and Haitian Creole. Patrol officers in three of the department’s precincts will get the app in the next two days, he said Wednesday.

“We’re interacting with the public well over a million times a year,” he said. “It puts them at a comfort level.”

“You can imagine the frustration of the police officer and the victim” when they can’t communicate, he said.

The translation audio and video clips will be saved for future use, he added.

The Suffolk County Police Department has a pilot program in which officers have tablets to access a language translator , according to a Department of Justice report issued earlier this month as part of an agreement following the hate-crime killing of an Ecuadorean immigrant nearly 10 years ago.

Suffolk police have since been evaluated on their interactions with the Latino community and in the latest federal report were deemed to have made substantial progress in certain areas. It is unclear, however, when the tablets will be distributed departmentwide.