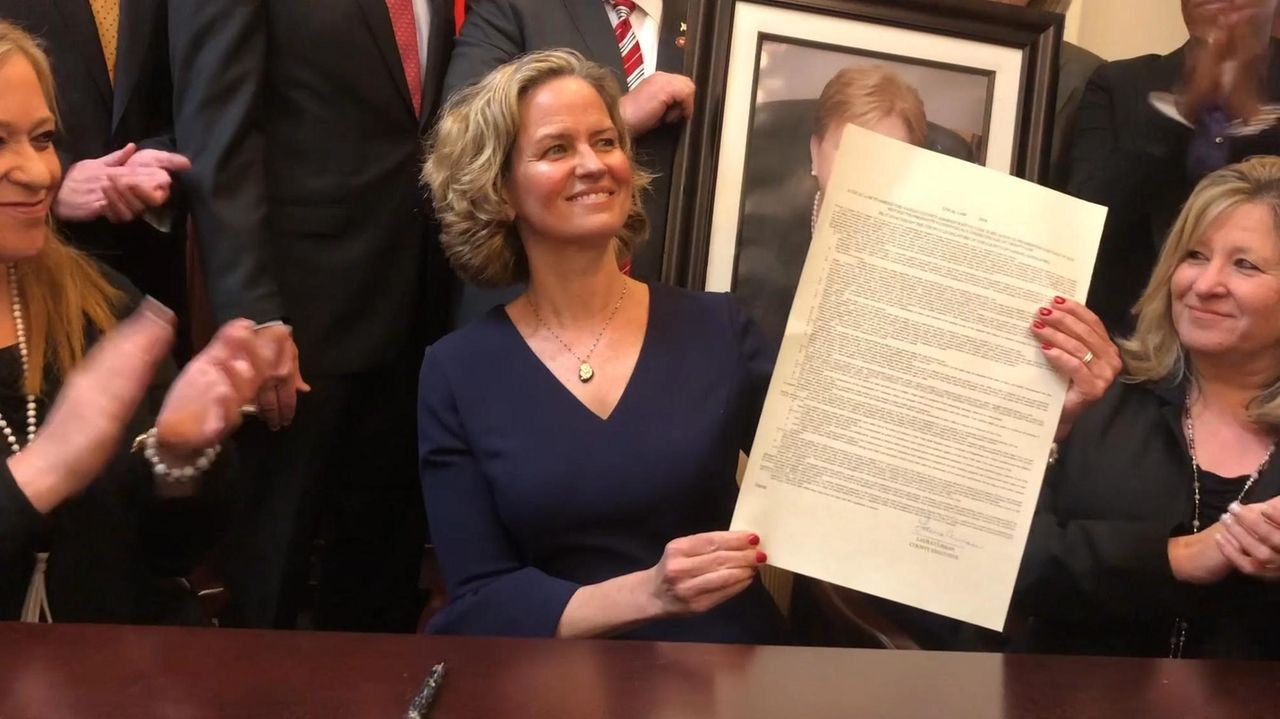 On Monday, Nassau County Executive Laura Curran signed legislation banning the sale of tobacco products to buyers younger than 21.  The law will go into effect in 60 days and brings Nassau County into line with Suffolk County and New York City, which have similar laws. Credit: Howard Schnapp

A portrait of Jacobs, a yearslong champion of the bill, was featured in the room at the Theodore Roosevelt Legislative and Executive Building in Mineola, where Curran signed the legislation into law while seated next to Jacobs’ two daughters.

“I’m very proud to be signing this legislation today,” said Curran, joined by members of the Nassau County Legislature. She cited the health concerns about vaping among young people as a motivation behind the bill, which goes into effect in 60 days.

The move brings Nassau into line with Suffolk County and New York City, which have similar laws. Practically, the Nassau measure will affect only Oyster Bay Town, as Hempstead and North Hempstead towns already prohibit tobacco sales to buyers younger than 21.

Last month’s unanimous legislative passage of the bill drew cheers from dozens of physicians, parents, educators and health care representatives who had addressed lawmakers passionately about the dangers of nicotine addiction.

For years, the Republican caucus did not support the bill. Presiding Officer Richard Nicolello (R-New Hyde Park), said Monday “this is a great achievement for this legislature.”

Nicolello credited Jacobs as “the prime mover of this legislation” and said the bill was a “great tribute to her.”

“Anything you do in government is a balance,” Nicolello said. “You balance different interests, and we certainly considered the fact that young people who are 19 and 20 have the ability to make important decisions in their lives. But we also heard the testimony.”

Democrats in the county legislature repeatedly had proposed changing Nassau’s local law over the years, but were thwarted by Republican opposition. It was first introduced by Jacobs, a Woodbury Democrat and a longtime presiding officer, who died in September 2016 after having been diagnosed with myelodysplastic syndrome, a bone marrow disorder and form of cancer.

The bill that passed May 23 was similar to Drucker’s and was sponsored by all 11 members of the GOP majority.

Fines ranging from $300 to $1,500 would be levied against retailers who break the law, which the county Health Department will enforce.