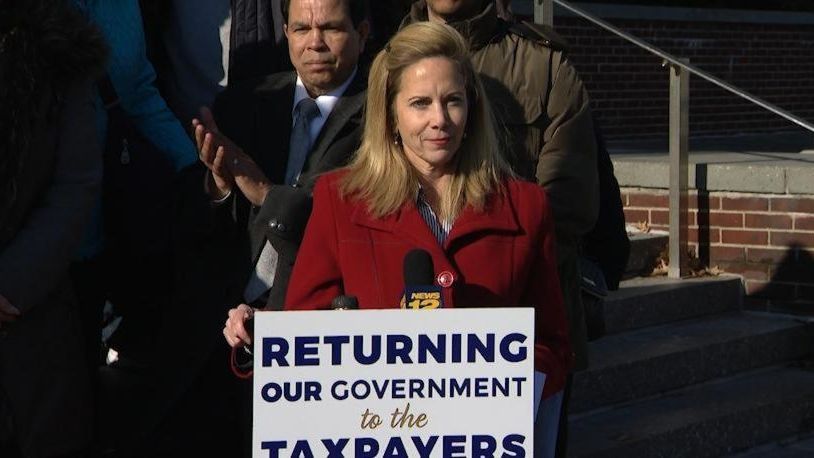 “He’s betrayed his oath to the people of Hempstead,” Gillen said during a news conference outside Town Hall.

Town spokesman Mike Deery responded to Gillen’s call for Santino’s resignation with a statement on Monday afternoon: “Beyond stating that the request is ludicrous, the Supervisor has no comment.”

On Tuesday, the town board is to vote on the personnel changes. The 192 positions under consideration include both union and exempt employees, including some who have passed civil service exams. Staff in the offices of elected officials or department commissioners would be protected if the town board approves their transfers to other departments within the town.

Raises and promotions in Town of Hempstead

“With these new measures, Santino is brazenly and bitterly lashing out at voters,” Gillen said.

Gillen also called out Santino’s supporters in town government, including some members of the town board, and said “your actions tomorrow will not be forgotten by me” or voters.

Gillen, a Democrat, is to be formally sworn into office Jan. 2, succeeding Republican Santino.

Also on Tuesday, the town board is to vote to approve changes to the union’s collective bargaining agreement so that no town union employee can be terminated for budgetary reasons. If that resolution is passed, union employees would be terminated only for misconduct or incompetence.

Gillen has vowed to file a lawsuit if the changes are approved, saying that her administration would be prevented from balancing the town’s budget, if financial crises arise.

She and Councilwoman Erin King Sweeney have decried Santino’s “11th-hour” measures and said they are attempts to protect Santino’s “loyalists.”

Gillen’s campaign representatives said their calculations show those transfers and raises would require $4 million in new spending. In October, the town board passed a $418.6 million budget for 2018 that includes a 1.9 percent tax levy increase.

“Supervisor Santino’s shameless personnel moves reveal a disturbing attitude that government exists to serve the interests of a political machine at taxpayers’ expense,” according to a statement from Reclaim New York Initiative, the nonprofit lobbying arm of Reclaim New York. “The Town Council should vote down the Supervisor’s payoff scheme.”