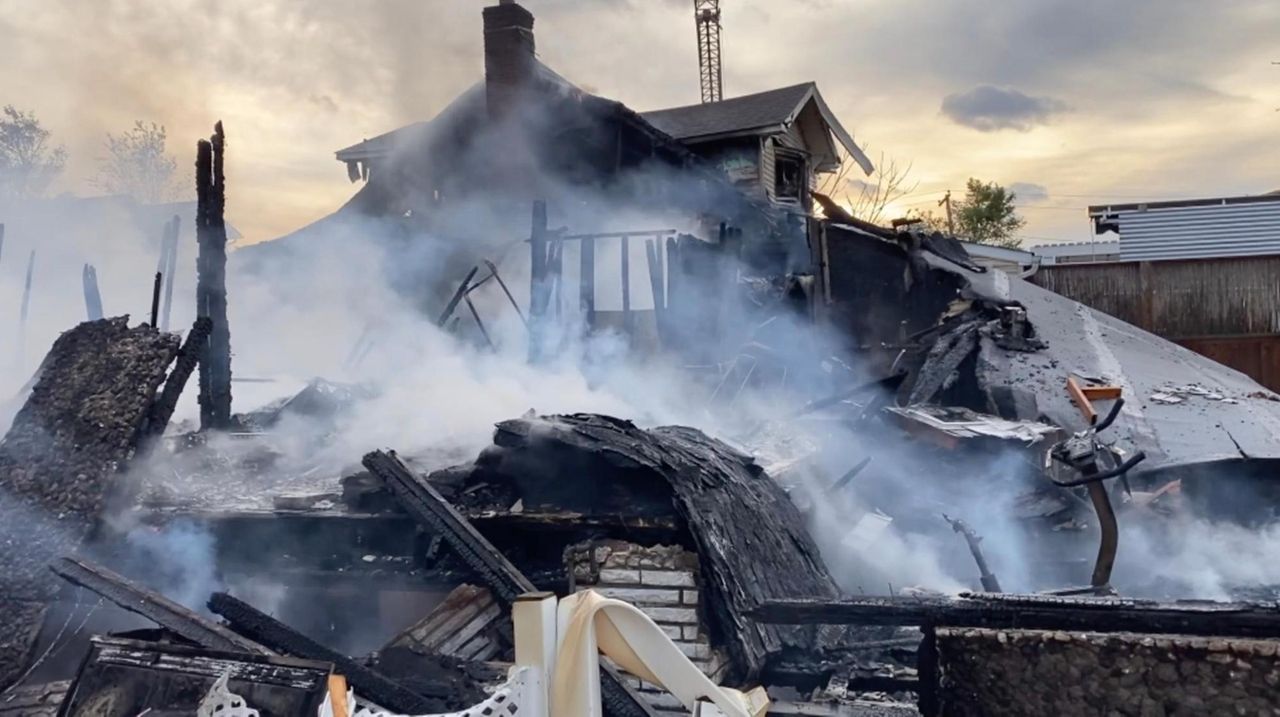 A civilian and a pair of firefighters were injured by an explosion and ensuing blaze early Sunday at a Meadowmere Park home in Lawrence that destroyed that residence and two others, according to the Nassau County Fire Marshal’s office. Credit: Jim Staubitser

An explosion and fire caused by a natural gas leak destroyed three homes in Meadowmere Park early Sunday, injuring one civilian and two firefighters, according to the Nassau County Fire Marshal’s office.

The blast, which could be heard blocks away, tore through a home on West Avenue about 5:40 a.m., said Assistant Chief Fire Marshal Michael Uttaro. The house caught fire, and the flames jumped to two neighboring homes.

A person in the home where the explosion occurred suffered critical injuries, including burns and smoke inhalation, Uttaro said. Medics airlifted the victim to Nassau University Medical Center in East Meadow, where he was in stable condition, police said.

Two firefighters from the Valley Stream Fire Department were injured when part of a chimney fell on top of them, Nassau police said. They suffered bruises and lacerations to their shoulders, police said, and received treatment at local hospitals.

They were among some 125 firefighters from 15 nearby fire departments who beat back the blaze by 9 a.m., Uttaro said.

Meadowmere Park, a South Shore community in the Town of Hempstead, is a dense neighborhood of single-family homes that hem the border between Queens and Nassau County.

Hempstead Supervisor Don Clavin said he was "saddened" by the accident and grateful for the first responders who fought the fire.

"I'm praying for the injured and for those who lost their homes," he said in a statement.

The three houses, as well as three to four vehicles, were destroyed, Uttaro said. One home was burned down to its beams, while the roof of another partially caved in.

Uttaro said officials from his office and the Nassau County Police Arson Bomb Squad investigated the explosion. Officials have not yet identified the source of the gas leak, he said.

National Grid workers were also at the scene Sunday morning to turn off gas at homes in the neighborhood, said David Bertola, a spokesman for the utility.

Errol Blackwood, who lives a few blocks from the site of the fire, said the explosion woke him up.

"It shook the house like an earthquake," he said later Sunday morning, surveying the wreckage left by the fire. "I just hope everybody’s OK."

Kerry Madden, who lives a short walk from the scene, said she could see the flames from her home.

"I looked out my bedroom window and all I see is big fireballs," she said.

"I’m devastated," she said. "Everyone around here, we’re a close-knit family."