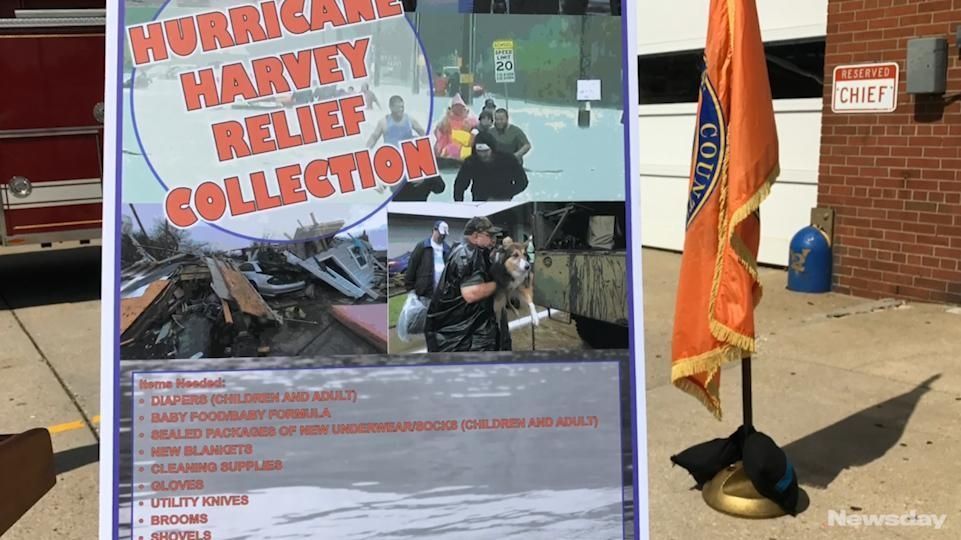 “For those of us that live on the South Shore of Nassau County, the images that we’ve seen coming out of Texas over the course of the last five days are images with which we are all too familiar,” Rhoads (R-Bellmore) said Wednesday at the Freeport Fire Department, where he and Freeport Mayor Robert Kennedy announced a collection drive for Harvey victims. “We know all too well what it is that they’re going through. And we know all too well what is to come over the weeks and months ahead.”

Harvey has ravaged Houston and other parts of Texas with driving rains and record-breaking flooding. The death toll was climbing Wednesday as the floodwaters receded and authorities began discovering the full extent of the devastation.

“Now it is our opportunity to pay it forward and pay back the people of Texas for the support that they gave us” after Sandy, Rhoads said. The items will be collected through Sept. 8 and transported to Texas by Louisiana-based Arabie Trucking.

Kennedy renewed his call on Wednesday for the installation of tidal gates along the South Shore to protect Nassau County communities from flooding.

“Hurricane Harvey and superstorm Sandy have too many similarities,” he said. “This is an unfortunate reminder of the vulnerability and exposure to our waterfront communities in the South Shore of Long Island.”

Catholic Health Services on Long Island announced it will donate $100,000 to help victims in Texas. The donation was made to a special collection being organized by the Diocese of Rockville Centre and came through the agency’s Caregivers Fund — money that is contributed by CHS employees.

The diocese will also continue to collect donations for its Hurricane Harvey Fund. Donations can be made through local parishes or directly to the finance office of the diocese. Special collections will be taken up at 134 parishes this Saturday and Sunday, and Sept. 16-17, the diocese said.

Supply donation drives are being organized through other religious groups, fire departments and municipalities, including the Town of Oyster Bay and West Islip fire department.

George Schwertl, 52, of Lloyd Harbor, will be making the 26-hour drive to the area to hand out supplies he’s collecting this week.

“Yesterday my wife and my daughter were in tears, seeing the devastation,” Schwertl said. “I thought, I could easily sit on my couch and watch TV or I could go and do this.”

Supplies can be left at the Halesite, Huntington Manor, East Northport and Dix Hills fire departments as well as at Schwertl Auto Body at 200 Blydenburgh Rd., Suite 11, in Islandia. Schwertl will leave Sept. 7 to drive supplies to Houston.

Temple Judea of Manhasset, Temple Beth Torah in Melville, Port Jewish Center in Port Washington and Congregation L’dor V’dor in Oyster Bay are collecting donations and will drive provisions down to the Houston area in an 18-wheeler.

OTHER WAYS TO HELP

Austin Pets Alive! in Texas, which said the process to take in animals lost or hurt in Harvey is expected to cost more than $20,000, is accepting financial donations, volunteers and pet supplies. https://www.austinpetsalive.org/

LI school start dates range from AAug. 26 to Sept. 10
LI restaurants, theaters push back on state's vaccine suggestion
These restaurants, employers, colleges and NYC theaters will be requiring COVID-19 vaccines
Report: Thousands of MTA employees don't use time clocks designed to prevent fraud
Four LI hospitals ranked among Top 50 in U.S. in medical specialties
Overpass in Lawrence to be renamed for civic leader
Didn’t find what you were looking for?