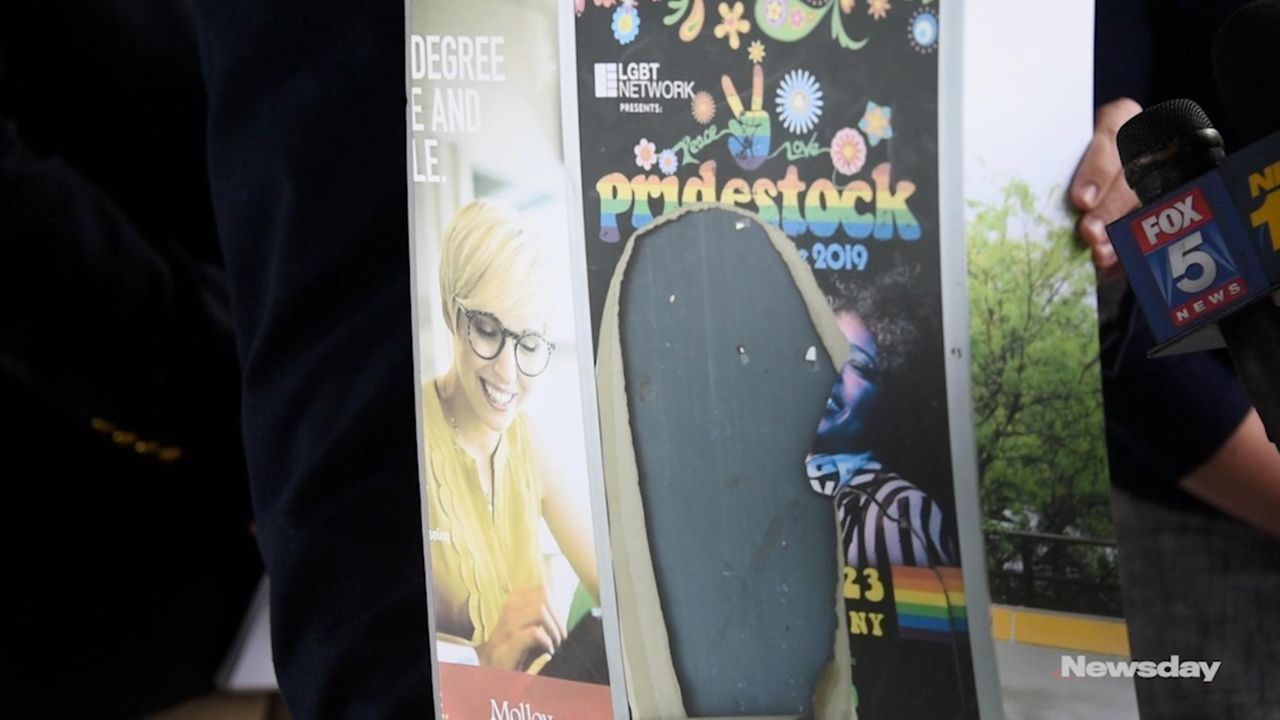 An LGBT billboard advertising 'Pridestock' was torn on Monday at the Bellmore LIRR station without any damage done to the adjacent billiboard, which suggested to town officials an act of hate against the LGBT community. The crime is currently under investigation.  Credit: Danielle Silverman

MTA and Nassau Police are investigating the vandalism of a billboard at the Bellmore Long Island Rail Road station advertising a festival that attracts tens of thousands of members of the LGBT community as a potential "hate crime," officials said.

The billboard was found torn down the center on Monday on the platform of the Sunrise Highway LIRR station, said David Kilmnick, chief executive and president of the Woodbury-based LGBT Network.

Kilmnick said the poster, promoting the upcoming Long Island Pride Festival in Long Beach, was targeted for its message of inclusion and was meant to "send a message of fear."

"There's no question in my mind that this was not an accident," Kilmnick said at a news conference Tuesday at the LIRR station. "The poster, which had been up for less than a week, was intentionally targeted."

Three other advertisements next to the Pride Week posters, including for Molloy College and a local property tax reduction firm, were not damaged.

"We know there has been an uptick of hate crimes against the LGBT community," Gillen said. "And we are here to send a message that this kind of hate crime will not be tolerated in the Town of Hempstead."

MTA spokesman Aaron Donovan said the agency was notified of the vandalism via Twitter and immediately removed the damaged advertisement. The LIRR, he said, will work with their contractor, Outfront Media, to have the poster quickly replaced.

"The MTA and LIRR have no tolerance for discrimination," Donovan said. "The MTA Police are investigating this incident, and notifying and sharing our investigative leads with the State Police Hate Crimes Task Force."

Nassau Deputy Police Commissioner Kevin Smith said the department is investigating the incident as a potential "hate crime" against the LGBT community.

"Anyone who comes here and damages a sign that promotes celebration and diversity has a problem," Smith said. "The Nassau Police Department takes it serious."

The department, Smith said, will examine video surveillance on the LIRR platform to help identify the perpetrator. Cameras are visible near the elevated waiting area but not near the site of the Pride Week poster on the eastern end of the platform.

Last month, Kilmnick said he received a letter threatening “trouble” at Alive After Five, a popular street festival in downtown Patchogue that has scheduled a day dedicated to LGBT pride . A Suffolk Police spokeswoman said detectives investigated the letter and determined it to be noncriminal.

There were several threats investigated related to last year's June Pride Festival , Gillen said. "Luckily nothing came of it," she said. "But we have a reason to show additional caution when we see an incident like this close to Pride Week."

Kilmnick said the perpetrator of the vandalism not only damaged a poster but attacked an entire community.