For the second year in a row Saturday, the fastest finisher of the 5K race that serves as an advancer for Sunday’s Long Island Marathon was a boy in his early teens building up his stamina to run a full marathon.

Anthony Diaz, 14, of Farmingdale, finished with a time of 17 minutes 51 seconds, which he said was about a half minute quicker than last year.

“I like the competitiveness of it, when I’m almost dying out, because that means I’m pushing to my limit and all the training is worth it,” he said after finishing.

Diaz was one of 765 runners registered for the 5K and 1-mile contests Saturday at Eisenhower Park in East Meadow, the kickoff of a weekend of races that continue Sunday with a 10K, half marathon and the marathon itself. 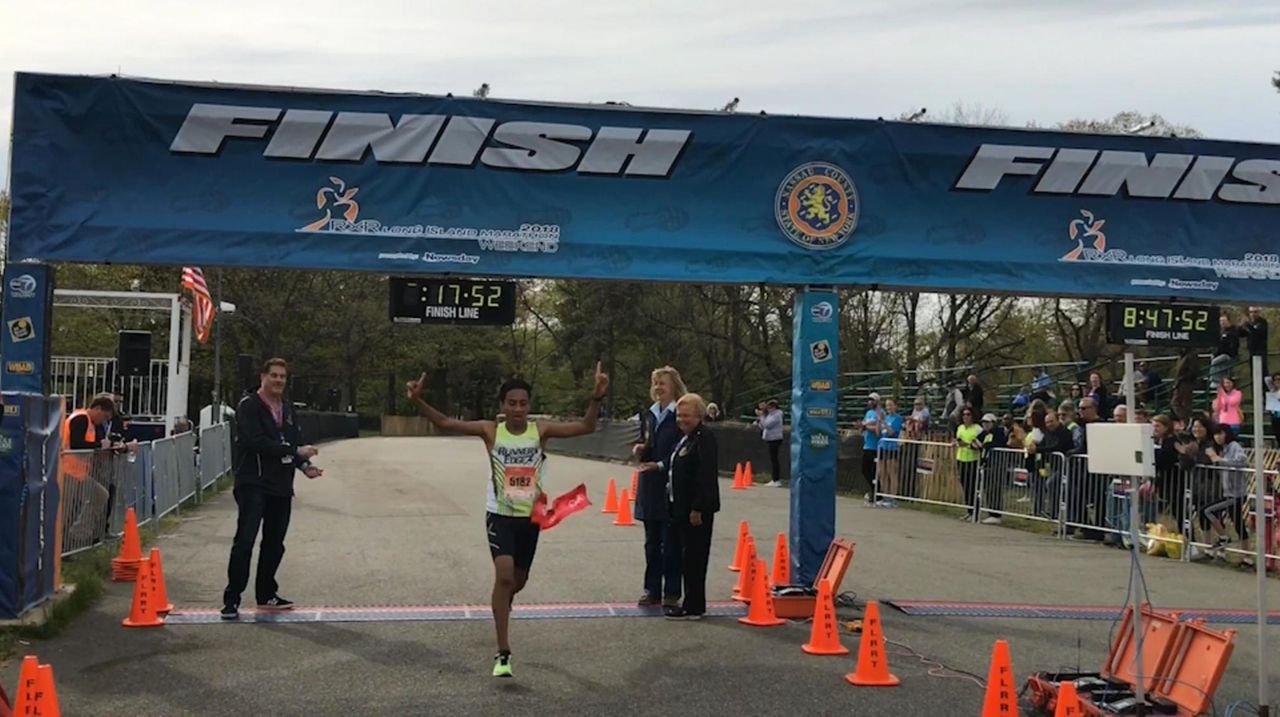 Pre-marathon races, marathon check-in on Saturday Hundreds of people ran in 5K and 1-mile races in Eisenhower Park Saturday, May 5, to kick off the Long Island Marathon weekend. The marathon, half marathon and 10K are Sunday.  Credit: Newsday / David Olson

“I’m guessing most of the people who run the 5K are a combination of people who are using it as a tuneup run, and they run larger races, and people who are getting into running and it’s a steppingstone . . . ,” said Jason Lipset, race director of the Long Island Marathon. “And of course you have a lot of charities and stuff, and 5K is sort of a distance that more or less anybody can do in a reasonable amount of time.”

About 75 of those running Saturday were raising about $20,000 for the Michigan-based Williams Syndrome Association, said Rob Dell’Unto, 46, of Rockville Centre, whose 12-year-old daughter, Julia, has the syndrome. The genetic condition causes developmental delays and medical problems such as cardiovascular disease.

This is the ninth year that Long Islanders have been raising money for the association through marathon-weekend events, he said. Others have participated in similar events nationwide, which also are designed to raise awareness about the syndrome.

Diaz, a ninth-grader at Farmingdale High School, said he has been running for years and only got serious about it two years ago, when he joined his middle-school cross-country program. After that, he saw his finish time for 5K races drop dramatically.

The top women’s finisher in the 5K was Jessica Petrina, 36, of Selden, with a time of 19 minutes 59 seconds.

Other runners Saturday had more modest goals. Josephine Pierre, 32, is in the middle of an intense weight-loss regimen — she has lost 50 pounds in the past four months — and had never run five kilometers at once until Saturday. She finished in about 58 minutes.

“I feel great,” the Westbury woman said as she hugged her 5-year-old son, Christian. “I’m happy I did it and my kids were here to see it. I want to show them that we can achieve things when we put our minds to it.”

Also Saturday was a kids “micro-marathon,” for children aged 1 to 11, at the park’s Safety Town.

There are more than 5,000 people registered for the three races: 786 for the marathon, 3,229 for the half marathon and 1,277 for the 10K. Walk-up registration also took place Saturday.

Sunday will be Michael Savala’s first full marathon. The 26-year-old Brooklyn man has run four half-marathons and has been gradually upping his training distance to prepare for the marathon, peaking at 20 miles two weeks ago.

“I don’t have a time in mind,” Savala said after checking in for the marathon Saturday afternoon. “My goal is to cross the line.”

Nick Schneigert, 41, also isn’t trying to be one of the fastest finishers. But the suburban Chicago man does have a number in mind: He wants to run 50 marathons in 50 states, as a way to both see the country and because “I absolutely love running.” Long Island will be his eighth.

“I do it for the healthy lifestyle, and I love the mental toughness, the challenge of it,” Schneigert said. “You have to be disciplined and mentally strong to run a marathon.”

If you plan to go:

The marathon, half marathon and 10K race all begin at 8 a.m. near NYCB Live’s Nassau Coliseum and end across from Parking Field 5 in Eisenhower Park.

Nearly 5,000 people were preregistered for Sunday’s events, including 765 for the full marathon.

A number of roads on and around the marathon route will be closed.

Security will be tight. Among the restrictions: