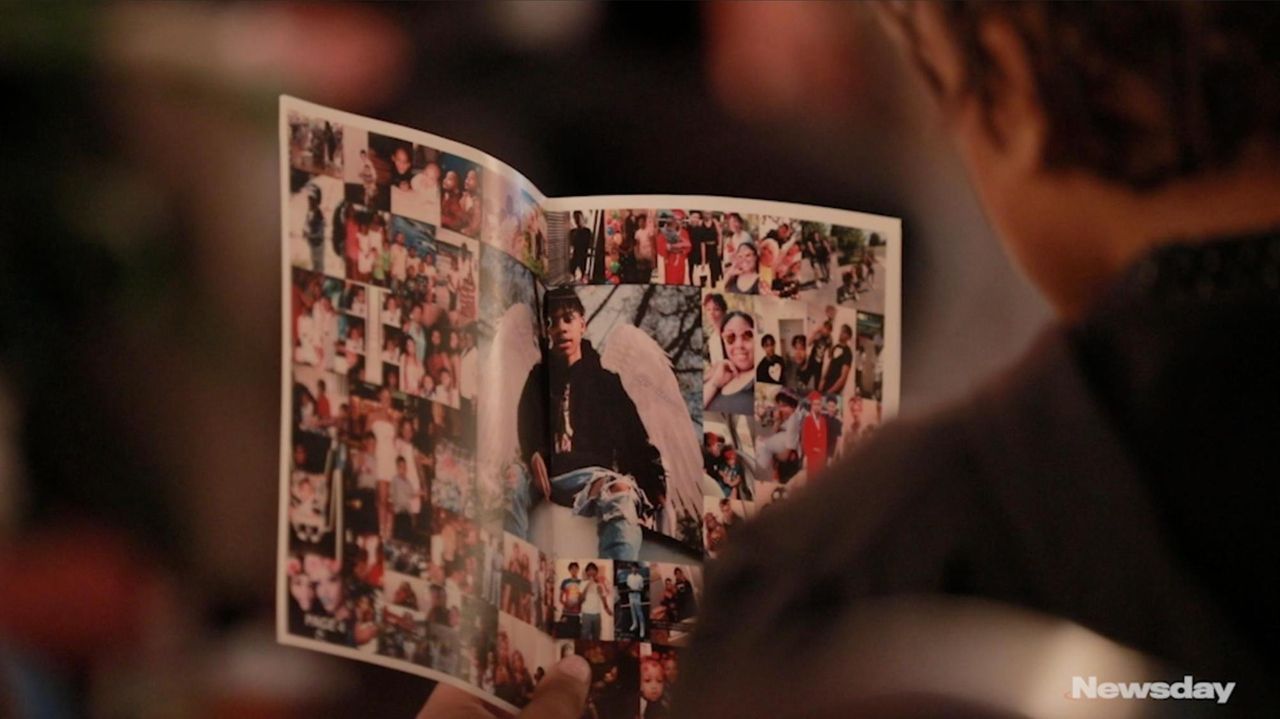 On Saturday, Sept. 28, 2019, a service was held for Khaseen Morris, 16, who was fatally stabbed, at Towers Funeral Home in Oceanside. Keyanna Morris, the oldest sister of Khaseen Morris, along with friends, gathered to mourn and pay their respects.  Credit: Newsday / Yeong-Ung Yang

Hundreds of people streamed for hours into an Oceanside funeral home Saturday to pay their last respects to Khaseen Morris, the teen who was fatally stabbed and who was remembered for his infectious smile and buoyant spirit.

From 10 a.m. until midafternoon, an almost constant flow of people filed into the Towers Funeral Home where Morris’ open coffin was surrounded by flowers.

“Seeing how many people love him — of course it helps,” said Keyanna Morris, 30, Khaseen’s eldest sister, as she held her 2-year-old son Karter Morris in her arms outside the funeral home while greeting visitors.

A total of 800 funeral cards had been printed, and they were all gone before the service ended, the funeral home owner said.

Throughout the day, family and friends described how Khaseen, 16, "skateboarded" into their lives, lending his ear to someone needing advice, and who was always game to eat bowls of his auntie’s porridge.

Khaseen's coffin lay below a white banner with a photo of the smiling Oceanside High School senior. When little Karter first saw the banner and photo, he briefly smiled and exclaimed “Khaseen!”

“Then when he finally looked down and saw his body, he got a confused look and said, ‘What, what?’ ” Keyanna Morris said. “Then I saw the tears start to form.”

Khaseen and Karter were inseparable, she said.

Morris said she was taking care not to cry, to be strong for her three grieving children and other family members.

“Once I get the family through this, I’m going to step away and break down alone,” she said.

When it came time to speak to mourners before the funeral service, with her parents AnnMarie and Bryan sitting nearby, Morris had to stop at times to collect herself. She was defiant toward her brother’s alleged assailants.

“Even though my brother’s physical part was taken away, I refuse to give anyone the satisfaction of even thinking that they broke us,” Morris said of her family.

Morris had encouraged others to wear bright colors, “to show everyone his bright spirit.” Some teenagers, a few with skateboards in hand, wore tie-dye shirts, a favorite of Khaseen, an avid skateboarder.

Photos and videos of Khaseen, almost all with him smiling or laughing, flashed on a television screen as mourners stood or sat silently.

Gigi Greenwood, 17, who attended Freeport High School with Khaseen before he and his family moved to Oceanside, recalled how he “could make everyone smile. He can say anything and you’re in tears laughing. He was really goofy, playful.”

“As a person, he was unforgettable,” said Juan Mendez, 32, of Massapequa, who taught science to Khaseen at the Roosevelt Children’s Academy. “He had a presence. Everybody loved him. He was a class clown. He was great. He was full of life.”

Family members and friends took turns speaking on a mic before the formal funeral service began.

A cousin read aloud notes from Khaseen’s teachers and faculty at Oceanside High School, where despite having only started classes there for the first time a few weeks ago, he made a lasting impact.

He was a “natural leader,” one educator noted. Another recalled how he had partnered in a class activity with a shy student who had no friends.

“Two weeks, 10 school days, that’s all it took for Khaseen Morris to make the kind of impact that grown adults would work a lifetime for,” the cousin read from one educator’s note. “His electric energy, charismatic personality and free spirit were contagious. It was these characteristics that made him exceptional.”

His art teacher wrote: “Khaseen skateboarded into the lives of my studio art class and stole our hearts.”

A science teacher added,  “His passion for life and his enthusiasm to learn was so endearing. Khaseen will be greatly missed by many. However, the impact he had on us during those few short weeks will never leave us."

Zavad Cook, who was friends with Khaseen at Roosevelt, said Khaseen’s “chill” nature and his ability to get along with everyone made his slaying especially hard to accept and grasp.
“Pretty much the worst thing is that this happened because he was being a good guy,” said Cook, 17, referring to how police say the root of the fatal fight was a dispute over a girl that the Morris family said Khaseen had walked home at her request. “He was being a gentleman.”

But joyful memories of the high school senior were mixed at times with ire toward those who allegedly beat him in an Oceanside strip mall parking lot, and the assailant who was charged with fatally stabbing him.

“I’m angry, I’m mad … and I’m trying to control it,” Cherril Minott, an aunt of Khaseen who lives in Atlanta, said during the remembrances and addresses that family and friends of Khaseen made before the service. “They took him from my sister. They took him from us. They have bore a hole, dug a hole, so deep in our hearts that it will never be filled.”

A grand jury has indicted Tyler Flach, 18, of Lido Beach, on a second-degree murder charge and a count of fourth-degree criminal possession of a weapon in connection with Khaseen’s stabbing on Sept. 16, court records show. He is being held without bail at Nassau County’s jail.

Nassau County Police Commissioner Patrick Ryder, after holding a news conference to announce the arrests of seven more alleged assailants in the attack on Khaseen, came to the funeral home to offer his condolences to the family.

“We [in law enforcement] sometimes lose the personal side of things,” he said. “We get caught up in the business side. … But there’s a human side to it we can’t forget and that’s a 16-year-old man lost his life.”

On Sunday, the teen's friends will set off from the funeral home at 1 p.m. on skateboards and bicycles for “a last ride with Khaseen,” Keyanna Morris said. They will ride the half mile to the strip mall where Khaseen was fatally stabbed. All are invited to participate, his sister said.

Police say the murder suspect, Flach, is a friend of the ex-boyfriend of a girl Khaseen was friendly with. The ex-boyfriend believed Khaseen was dating the girl, but Khaseen texted him to say he was not, and only had walked her home from a party, the Morris family has said.

Flach was part of a group who charged at Khaseen and his group of friends, police said. On Friday, the seven other teenagers, all from Long Beach, were arrested and charged with second-degree gang assault, police said. They were arraigned Saturday.

Nassau Homicide Dets. Daniel Finn and John Mitchell, who are investigators on the case, came to the funeral home to pay their respects and left their business cards for potential witnesses.

Ryder said investigators are still hoping to talk to more witnesses and get more video to assist in the case.

“There’s a lot of kids involved in this thing now,” he said. “Unfortunately, a lot of lives have been destroyed for some stupid mistakes, and people are now going to pay the price for that.”
With Yeong-Ung Yang