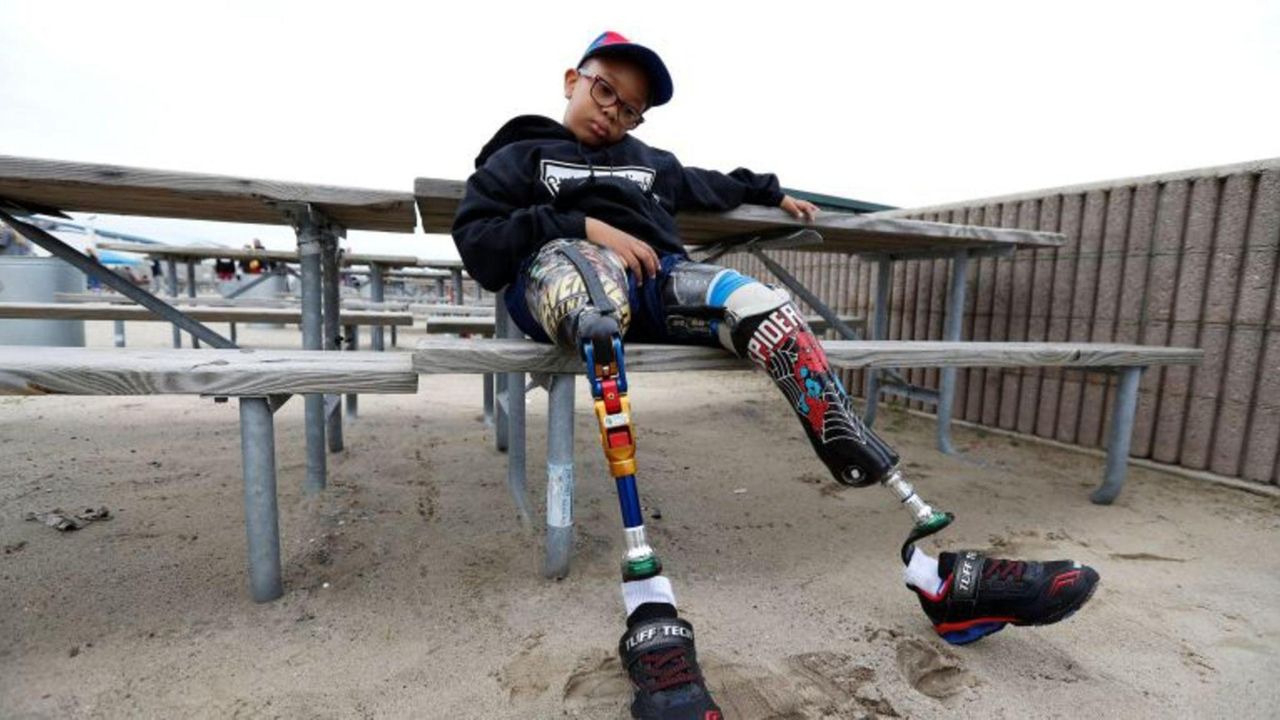 The Out on a Limb Foundation held a fundraiser at Lido Beach on Sunday for pediatric amputees. Hundreds of people came to eat, paint pumpkins, toss bean bags and buy raffle tickets. The foundation is seeking to raise $1.5 million to $2 million to build a center in western Nassau County that could serve 200 to 300 children with prosthetic limbs annually. Credit: Newsday / Ted Phillips

Logan Passe can’t wait to make his next — and first — leap.

“I just really want to jump,” the 8-year-old Logan said Sunday at a Lido Beach fundraiser for pediatric amputees where he showed off his new prosthetic legs. White gym socks covered the curve of the artificial limbs’ running blades that slipped snugly into his sneakers.

“It took a while for me to get used to them,” he said of his seven-week-old legs that were decorated with superheroes Spiderman, Black Panther and the Avengers.

His parents, Kenzy and Toni, bought the new legs with assistance from the Oceanside-based nonprofit Out on a Limb Foundation, which helps parents pay for costs not covered by insurance.

The Passe family came to Lido Beach on Sunday from Brooklyn for the Out on a Limb Foundation Beach Benefit that both raises money for the foundation and brings together children with artificial limbs. Hundreds of people came to eat, paint pumpkins, toss bean bags and buy raffle tickets.

The foundation is seeking to raise $1.5 million to $2 million to build a center in Western Nassau County that could serve 200 to 300 children with prosthetic limbs annually, the foundation’s executive director Robert Schulman said. The center would be an open space gym where they could learn to walk, run and ride a bike and would also provide them with mentors, he said.

“Children with limb loss are no different than any other children,” Schulman said. “They want to run and do everything every child wants to do. They don’t want to be treated any differently.”

Toni Passe, 34, an accountant, said her son was born with a congenital bone condition that would have confined him to a life in a wheelchair had they not decided to amputate and choose prosthetics before his second birthday.

“It’s easier for a child to adapt when they’re young,” she said.

Kenzy Passe, 37, a retail manager, said being around other children with prosthetics is important so “he sees that he’s not alone and can be a normal kid like everyone else.”

Logan isn’t ready to jump yet. Dancing in front of the stage Sunday among a group of about two dozen people he collapsed.

“It’s pretty much because this leg buckled,” he said later. “I don’t fall because I trip on stuff. I’m still working on my balance.”

Spill or not, when Schulman called Logan up to belt out a rendition of Imagine Dragons’ song “Believer,” Logan wiped away a tear and took the stage.

“You still got to get back up again,” Logan said afterward. And besides, he said, he’s got fans to please: “Being there is like being on top of the world.”