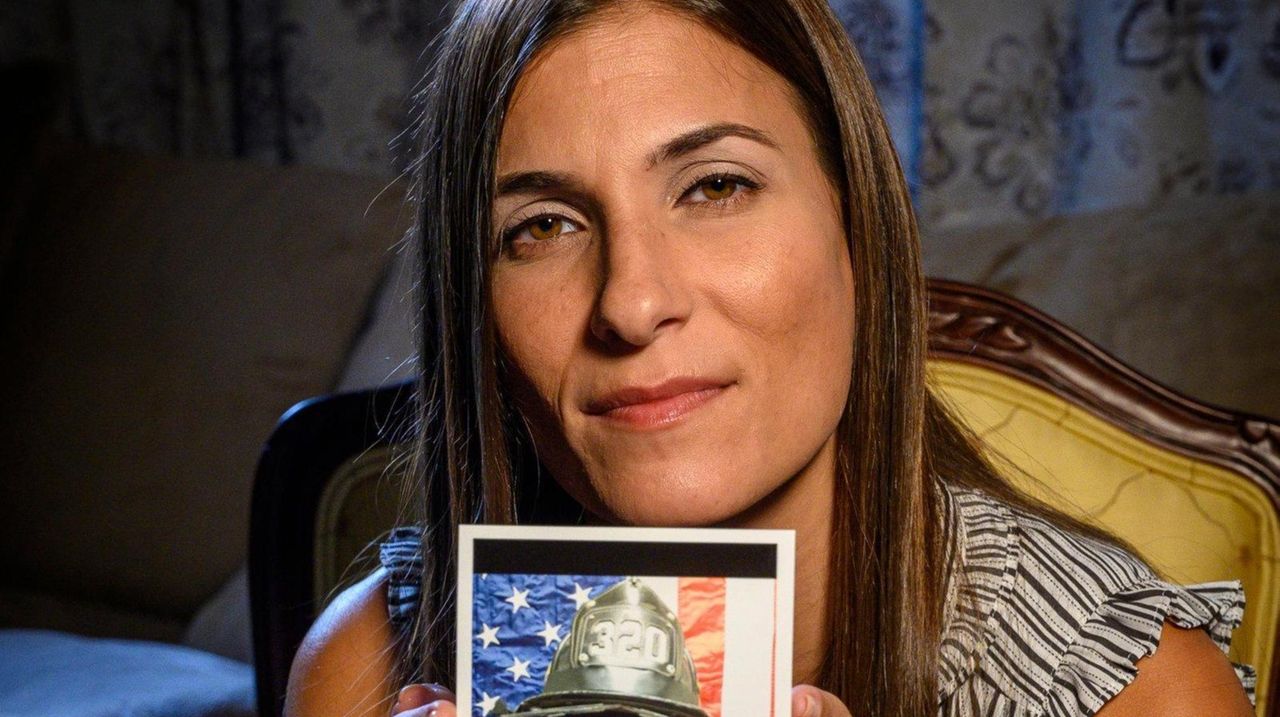 Her LIRR co-workers had donated 66.5 vacation days to care for her husband, a former firefighter sickened from working on the pile and who died Sept. 14. The railroad at first said she could not keep remaining donated days after her husband died, then said she could. Credit: Newsday / J. Conrad Williams Jr.

Miriam Espinal of Glen Cove has spent the past 13 months in a perpetual state of shock and despair.

First came the August 2018 diagnosis. Her husband, Roger Espinal, a former city firefighter and EMS officer, had developed glioblastoma, a brain tumor linked to his work at Ground Zero.

When Roger's health deteriorated, Miriam, an assistant manager in the Long Island Rail Road's Queens-based engineering department, felt he could no longer be left alone. Miriam's co-workers found a way to help: They donated 66 vacation days so she could care for Roger and their 4-year-old son, Noah.

Roger died Sept. 14 at the age of 42. On Wednesday — less than a week after Roger's memorial service — Miriam was informed the LIRR was voiding roughly three dozen unused donated vacation days, arguing she was no longer entitled to them because her husband was now deceased. She would need to go on unpaid leave until she was ready to return, and her co-workers wouldn't get the days back.

"Where is the humanity?" Espinal said. "I just don't understand it."

On Friday, after being contacted by Newsday, the LIRR reversed course, announcing it would allow Miriam to utilize the remaining donated vacation days as she begins to put her family's affairs in order.

"The railroad sends its condolences to Miriam Espinal, who is coping with the recent loss of her husband, who performed heroically on 9/11," said LIRR spokesman Aaron Donovan. "Out of recognition for her family’s difficult period, we for the first time allowed employees to donate vacation time to a co-worker caring for an ill spouse. Previous vacation time donations have been to employees who were themselves facing catastrophic medical challenges."

Donovan continued: “She can use all time donated by her colleagues, including days remaining at this time. The LIRR is grateful to all of the employees who stepped up for Miriam; we are working to support her in any way we can.”

Roger and Miriam met in 2008 at a Brooklyn grocery store as he was shopping for ingredients to make dinner for his firehouse. He started a conversation about the Yankees — she was wearing a Bronx Bombers T-shirt — and asked for her phone number. He waited less than three hours to call and they began dating shortly thereafter. They were married in April 2013.

Roger was a do-it-yourself type of guy who never liked to sit still, Miriam recalled. He'd spend his weekends landscaping their front yard, remodeling the kitchen or playing outside with Noah.

But Roger rarely brought his work home and didn't like to talk about that Tuesday in September more than 18 years ago. Roger, who had joined the FDNY's Bureau of Emergency Medical Services a year earlier, worked on the pile for two days after the attacks.

"Roger didn't want to talk about work," Miriam said. "He shielded me from the scary moments."

It wasn't until nearly 17 years later that he began to feel ill. The glioblastoma prognosis was grim, not unlike the roughly 23,000 other Americans who suffered serious illnesses or death years after the 2001 terror attack. Roger was given 14 to 16 months to live.

But Miriam said her husband was unwilling to lay down and die. He continued working and even as he was undergoing radiation ran a 5k race on Randalls Island to raise money for brain cancer patients.

Eventually, though, it all became too much. Roger retired in January and his mental and physical condition rapidly deteriorated. Miriam came home one day to find that her husband had chopped down three trees in their yard. Another time he went onto the roof of their home to install a weather vane. When Roger fell asleep on the couch while holding his son, never waking up when his mother-in-law came to take Noah, Miriam knew she needed to stop working.

Miriam utilized all of her vacation time but the LIRR would not allow her to take sick days to care for Roger, she said. The railroad and Miriam's union, the Brotherhood of Railroad Signalmen Local 241, settled on a solution. The union reached out to its 150 members asking for volunteers to donate one or more vacation days to Miriam. Several members stepped forward anonymously, donating a total of 66.5 days.

"It was so generous," Miriam said of the donors. "This time amounts to a significant amount of money. I am not used to receiving pity. But this wasn't about me. It was about taking care of my husband."

Union officials with the Brotherhood of Railroad Signalmen did not respond to requests for comment.

The unusual arrangement stipulated that the donated days would expire at the end of 2019 and that once donated, the decision could not be reversed, according to documents obtained by Newsday. The donation form makes no mention of what would happen if Roger passed away before the days had expired.

Miriam would spend this summer shuttling Roger to doctor appointments and helping him manage his pain. But by early September the cancer spread to Roger's spinal fluid. He was hospitalized Sept. 5 and died nine days later. Miriam had used about 30 of the donated vacation days.

Roger's wake in Williston Park was attended by more than 1,000 family, friends and colleagues.

Miriam said she wakes up every morning to a mountain of paperwork. Life insurance. Pension documents. Bank accounts and utility bills that need to be transferred to her name. Noah sleeps in bed with his mother every night gripping a picture of his father. And the grieving period has hardly begun.

But there is also renewed hope. Next month, Miriam will run in the Head for the Cure, the same 5k her husband took part in.