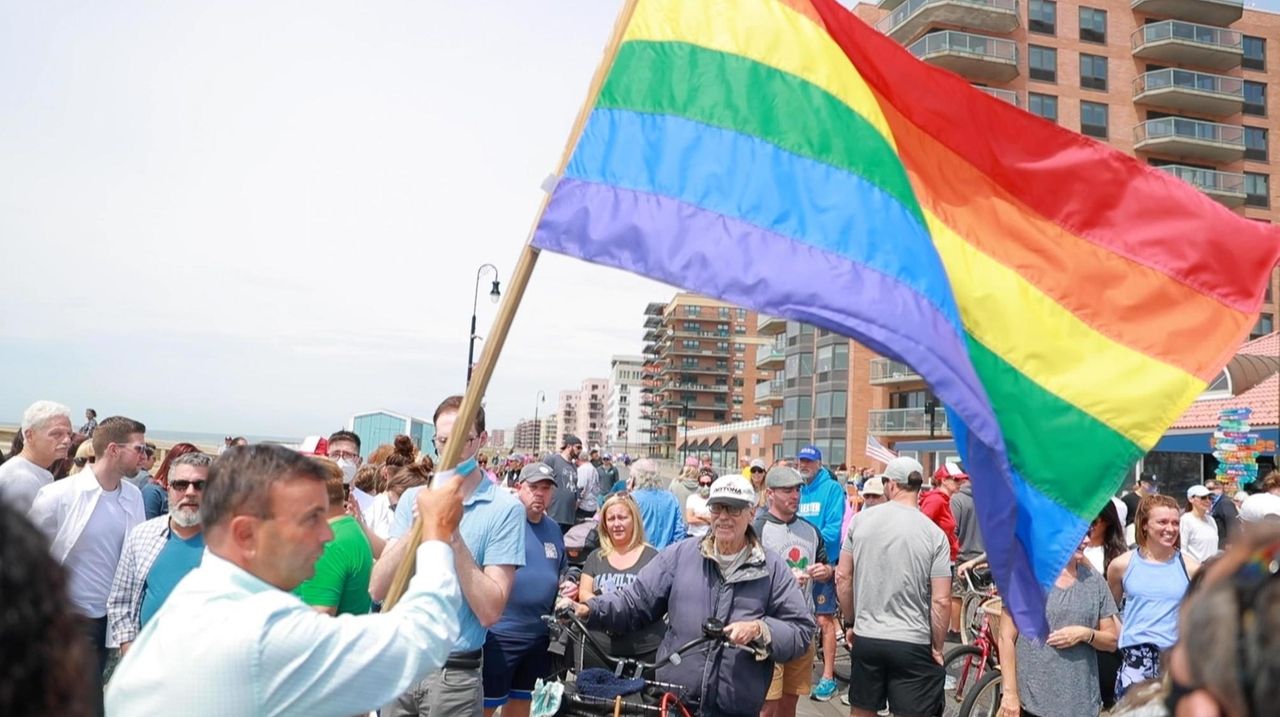 Riptides 11561, a food stand on the Long Beach boardwalk, was recently ordered by the city's police commisioner to remove a Pride flag from public property. On Sunday, the LGBT Network held a rally on the boardwalk to protest the move. Credit: Newsday / Raychel Brightman

The president of the LGBT Network demanded the resignation of Long Beach officials during a protest on the city’s boardwalk Sunday, saying the city leaders demonstrated anti-gay bias by ordering a food stand to remove a rainbow Pride flag.

Dozens of LGBT Network supporters, joined by a contingent of PBA members, cheered as Kilmnick and Wells demanded the jobs of Walsh and Bendo. Kilmnick was also heckled through much of his speech by supporters of the officials.

"There is no legitimate basis for the LGBT Network to hurl personal smears and call for the resignations of Police Commissioner Walsh and City Council President Bendo," the post said. "The City will explore legal recourse as a result."

The LGBT Network became involved in the flag flap, Kilmnick said, after several Long Beach residents complained that Walsh had informed an attorney for Riptides’ owners Brian and Gina Braddish earlier this spring that they had to remove a rainbow flag that flew on city property next to an American flag and a POW/MIA flag. Brian Braddish said the city gave Riptides permission to fly the flags in 2016 but declined to comment further.

Bendo was complicit in the bias against the LGBTQ community, Kilmnick said, because he was with Walsh one of the times the commissioner ordered the food stand to remove the rainbow flag.

Walsh said Kilmnick’s version of events is inaccurate. He said he asked the attorney for the food stand to move all three flags about 20 feet from city property to Riptides’ property after residents complained about them on the boardwalk. "To me, this is all political nonsense," Walsh said.

Bendo said the protest was driven by the city’s ongoing conflict with the LGBT Network, which has refused to pay $70,000 it owes Long Beach for services rendered during past Pride on the Beach festivals.

Bendo, who attended the protest, said he was angry that he was called homophobic. "This city opened itself and its hearts open to those Pride festivals," Bendo said. "I marched in those festivals."

Bendo said the city had to enforce its flag ban because it was cited against a resident who has displayed on his vehicle and home — visible from Riptides — a profane anti-President Joe Biden flag, as well as flags supporting former President Donald Trump. That resident has filed a $25 million lawsuit against the city.

"We can’t apply the law to him if we don’t apply it to everyone equally," Bendo said.

Kilmnick said the LGBT Network refused to pay its bill for the Pride events after it learned that Long Beach does not charge other groups, including the Polar Bears and the Ancient Order of Hibernians, for events they host every year. He demanded the city return hundreds of thousands of dollars from previous years' Pride events.

Bendo said the city does charge those organizations for services rendered during their events. The city could not recoup the funds sought from the LGBT Network after the organization moved the event, which will be held this year at Eisenhower Park.

PBA president Wells, meanwhile, said Walsh has turned his back on the police reform plan the city submitted to the state as ordered by Gov. Andrew M. Cuomo last year after George Floyd died in the custody of Minneapolis police. Wells said Walsh has issued new orders emphasizing aggressive enforcement over community policing.

Walsh declined to comment directly on Wells’ allegations but said he is running a 21st century agency that uses 21st century technology and 21st century methods. Bendo said the union had targeted Walsh, appointed to the job in February, because he was not the PBA’s preferred candidate.

The crowd cheered as Kilmnick installed a new rainbow flag on the city property.