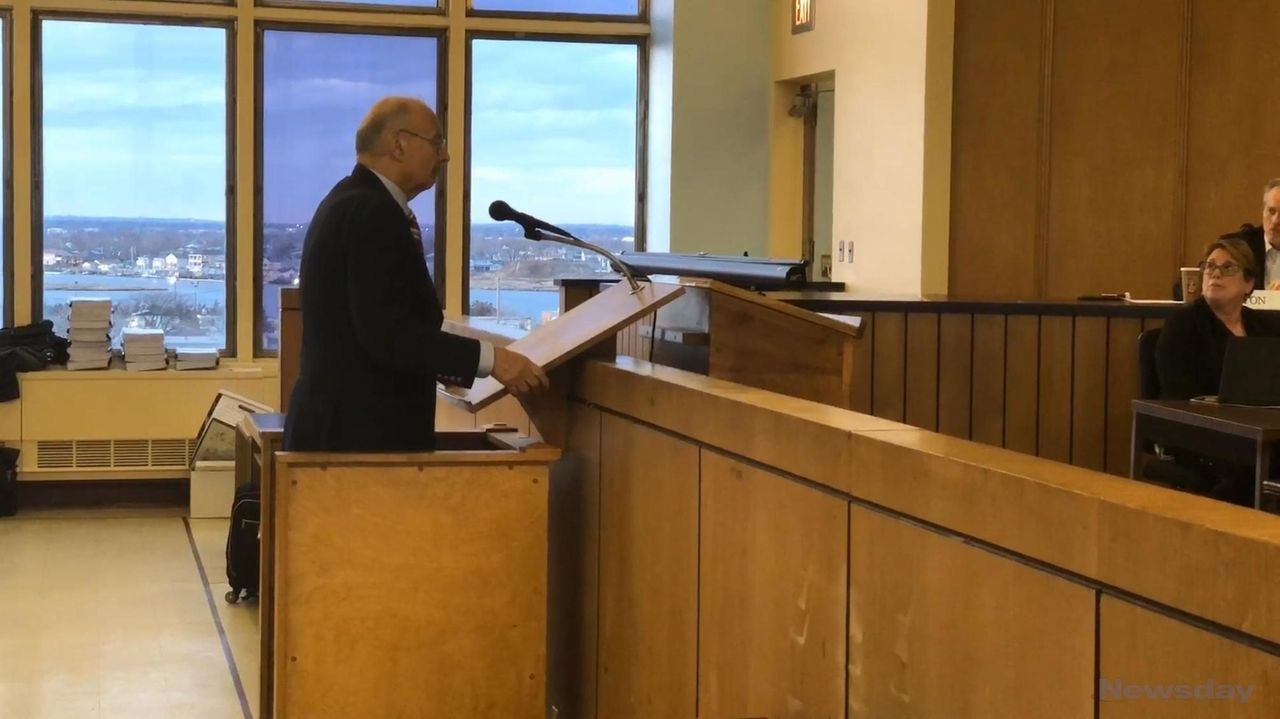 The Long Beach Zoning Board of Appeals weighed arguments Tuesday night on whether to revoke the building permit for developers of the Long Beach Superblock. A group of residents, led by former Sen. Alfonse D'Amato and Uniondale attorney Christian Browne, filed a lawsuit last year challenging the permit and variances, requesting the zoning board rehear the case. Credit: Newsday / John Asbury

The Long Beach Zoning Board of Appeals weighed arguments Tuesday on whether to revoke the building permit for developers of the Long Beach Superblock.

Attorneys for developers said the project is still moving forward and announced plans to seek new tax breaks to enable the start of construction.

The hearing was ordered by a state Supreme Court justice in Nassau who said the city’s Zoning Board of Appeals must review whether Manhattan developer iStar Financial and Shore Road LLC defaulted on variances granted in 2014 by failing to start construction or obtaining all permits within the first year.

Developers with iStar announced plans in 2014 to build two 15-story towers with 522 oceanfront apartments along the boardwalk between Long Beach and Riverside boulevards.

A condition of variances for height and density granted by the city required the developers to file “all necessary permits” to build the project and to commence construction within the first year or the variances would be revoked. A foundation permit on the site was extended twice by the building commissioner, through May 2018.

Developers have invested $80 million in the project and said they cannot build the project without tax breaks from the Nassau County Industrial Development Agency. They were twice denied tax breaks for up to $129 millions by the IDA.

The zoning board did not rule following Tuesday’s meeting and did not set a timeline when a decision on the permits will be made. The board said they could not consider tax breaks in their decision.

A group of residents, led by former Sen. Alfonse D’Amato and Uniondale attorney Christian Browne, filed a lawsuit last year challenging the permit and variances, requesting the zoning board rehear the case.

D’Amato, who lives in nearby Lido Beach and has long been a fierce critic of the project, told the zoning board it was oversold on promises by developers before variances were approved.

“Promises were made by a so-called multibillion developer who exaggerated . . . talking about the fact that they had the ability to do this project,” said D’Amato at the meeting.“This board was deceived.”

Attorneys for iStar, representing three firms, said they believed they were in compliance with the city after completing the initial foundation work and were told by the city that permits were generally obtained separately.

“This is a complicated development. There’s a reason property on the ocean hasn’t been developed yet,” said Scott Mollen, an attorney for developers. “When the owner is seeking assistance from the IDA, we believe public officials should be trying to help, not criticize.”

Zoning board members said that despite extensions for the project, developers have made little progress moving forward.

“Four years later, I’ve seen a lot of financial gyrations, but I haven’t seen any work getting these permits in line,” zoning board member Michael Leonetti said.