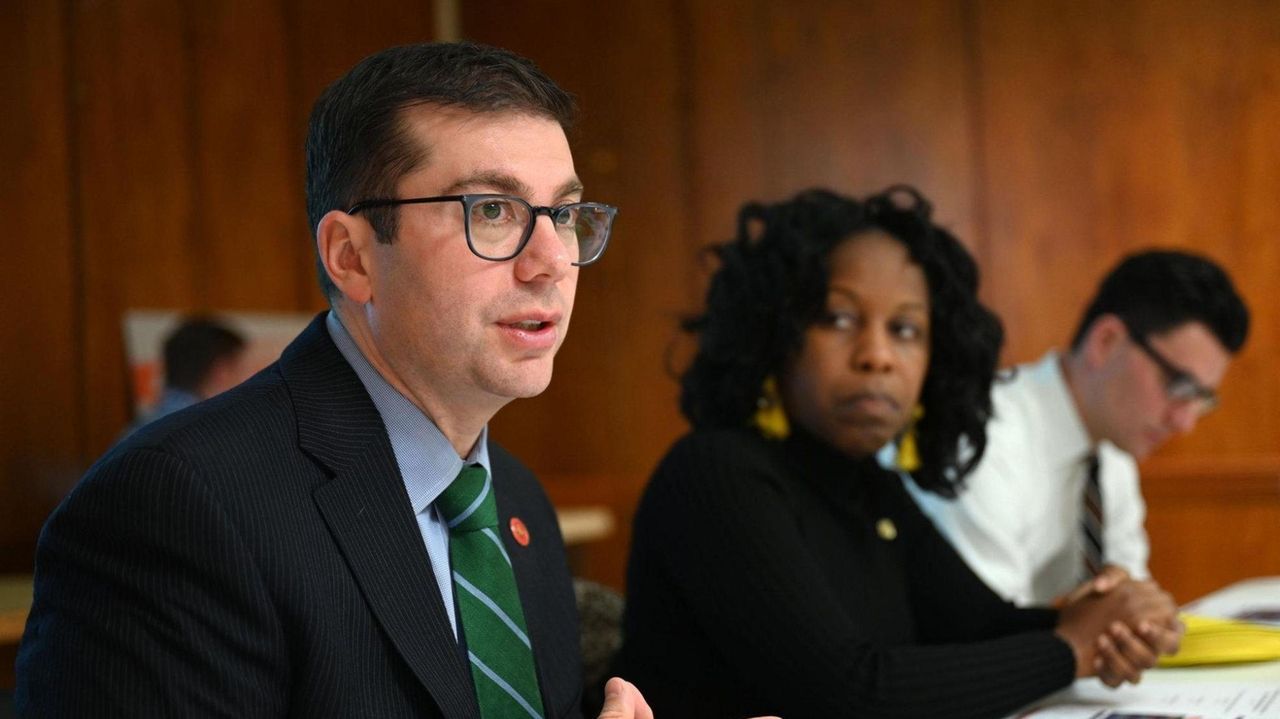 Nassau Comptroller Jack Schnirman spoke about changes in the county and Long Island's demographics and housing needs during a roundtable Thursday in Uniondale. Credit: Danielle Silverman

Long Island needs more affordable housing to stem the trend of young adults leaving the region, and more equity among schools to ensure all Long Islanders are prepared for jobs of the future, community leaders said at a roundtable Thursday.

Nassau County Comptroller Jack Schnirman convened the meeting at the Uniondale Public Library to unveil the latest in a series of reports from his office on the county’s and Island’s changing demographics and economy.

The new report, “Modernizing ‘The Deal’ of Living in Nassau County,” focused in part on expanding housing options, especially in downtowns and near train stations, where many young people prefer to live and where there are about 8,300 acres of underutilized land Islandwide.

The number of Nassau residents ages 20 to 44 has dropped by 9.3% since 2000, according to an analysis by the policy and research unit of the comptroller’s office. The high cost of housing is a key reason, Schnirman said.

Another sign that young people are being priced out of Long Island: 44.4% of people ages 25 to 34 were living with their parents in 2016, a sharp rise from the 9.9% who were doing so in 1970, according to Long Island Association Research Institute data cited in the report.

The revitalization of downtowns in Patchogue and Farmingdale — including construction of multifamily housing — have pumped hundreds of millions of dollars into local economies, the report found.

Mimi Pierre Johnson, president and CEO of the Elmont Cultural Center, said she and other residents had in the past pushed for zoning to allow more mixed-use development in Elmont — such as stores on the ground level, with apartments above — but were blocked by the Town of Hempstead.

Pierre Johnson said opposition to greater density and more affordable housing is in part rooted in racism — a fear that the units would attract more people of color.

“I’m not sure if it’s the name affordable housing that people are afraid of,” North Hempstead Councilwoman Viviana Russell said. “Maybe if we call it something different. But there are biases in communities throughout Long Island that don’t allow for it.”

Much of the multifamily housing that is being built is outside the price range not only of young adult Long Islanders, but also of seniors who want to remain on the Island, said Joann Urban, president of the Uniondale Public Library board of trustees.

Urban, 79, wants to downsize from her four-bedroom Uniondale home to a two-bedroom apartment. But when she inquired about prices of a new housing development in Uniondale being geared toward seniors, she was told a two-bedroom would cost $2,800 a month.

The report also found that Nassau County is failing to create the types of jobs that match residents’ skills and needs, which forces many to either commute to New York City or move out of the region.

Yet school segregation is hindering such efforts, said Assemb. Taylor Darling (D-Hempstead), noting that struggling schools in communities with large minority and low-income communities sometimes sit within a few miles of schools in wealthier areas with 98% high school graduation rates.

Nelson Melgar, president of the North Shore Hispanic Civic Association in Glen Cove, said one reason is that “our schools have been starved” by huge tax breaks that governments give to developers.

“We should not allow any particular business to not pay their fair share of taxes into the school system,” he said.

A new report released by the office of Nassau County Comptroller Jack Schnirman discussed housing and economic challenges in the county and across Long Island.

29% The percentage of Long Islanders who want to live in an apartment, condo or town house within five years

14.58 times How much higher the average income is for the top 20% of income earners in Nassau compared with the bottom 20% of earners. That’s a much bigger gap than nationally.

SOURCES: “Modernizing ‘The Deal’ of Living in Nassau,” from Nassau Comptroller Jack Schnirman’s office, which cites data from the state Department of Labor, Long Island Index and Federal Reserve Bank of St. Louis.