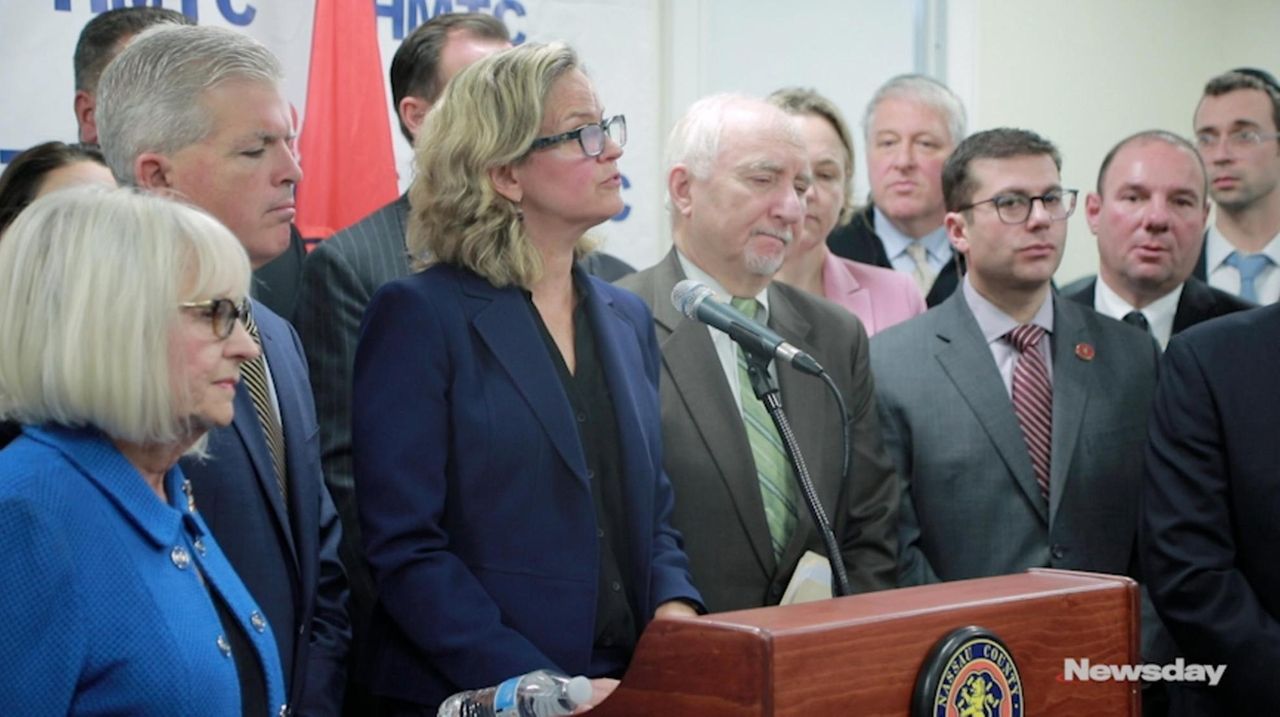 On Monday Nassau County Executive Laura Curran announced the formation of an Islandwide anti-hate task force in response to a spate of anti-Semitic graffiti in the area. Credit: Newsday / Yeong-Ung Yang

Long Island officials on Monday announced the formation of an Islandwide anti-hate task force in response to a spate of anti-Semitic graffiti in the area.

“We have a zero tolerance for bigotry,” Nassau County Executive Laura Curran said at the Holocaust Memorial and Tolerance Center in Glen Cove, where she was flanked by more than a dozen local lawmakers as well as religious and community leaders. “We will not tolerate it. We will not look away. We cannot look away from the fact that bigotry, anti-Semitism and other forms of hatred seek to divide us.”

“The only thing that allows hatred to consume us is when people of good faith refuse to stand up and call it out for what it is,” Bellone said.

The task force will be composed of volunteers and will focus on education and coordination between law enforcement agencies across Long Island, Curran said. The task force will make “recommendations and plans to combat this,” she added.

Last week, Glen Cove police reported two swastikas had been spray-painted on Nassau County property near the Holocaust center. Photos provided by the center show one swastika painted on a tree and another on a rock near the center.

“The Holocaust Memorial and Tolerance Center and community was shocked, saddened and frightened when racist graffiti, including swastikas, appeared here on our beautiful and tranquil grounds in Welwyn Preserve,” said the center’s chairman, Steven Markowitz.

Markowitz said that the genocide the Nazis committed against Europe’s Jewish population didn’t start with death camps but with bullying, discrimination and graffiti.

Another legislator also called for unity.

“We can erase the swastikas here but we can’t erase the pain in our hearts,” said Assemb. Charles Lavine (D-Glen Cove). “If we do not stand together our nation falls apart.”

“You will be prosecuted,” Singas said.

The Anti-Defamation League, a Manhattan-based organization that advocates against anti-Semitism, reported 340 anti-Semitic incidents in New York State last year, including 43 on Long Island.

The perpetrator or perpetrators of the swastika graffiti have not been caught, Glen Cove Police Chief William Whitton said Monday. He added that several derelict buildings on the county-owned Welwyn Preserve near the center have become magnets for graffiti artists from all over Long Island.

“The big draw and the reason people are coming here and doing graffiti is precisely because of these buildings,” Whitton said. Glen Cove police have made eight arrests for graffiti on the preserve over the past year, he added. “If these buildings go I think the problem goes.”

County spokeswoman Vicki DiStefano wrote in an email that the county is evaluating the buildings for asbestos and lead prior to demolishing them.