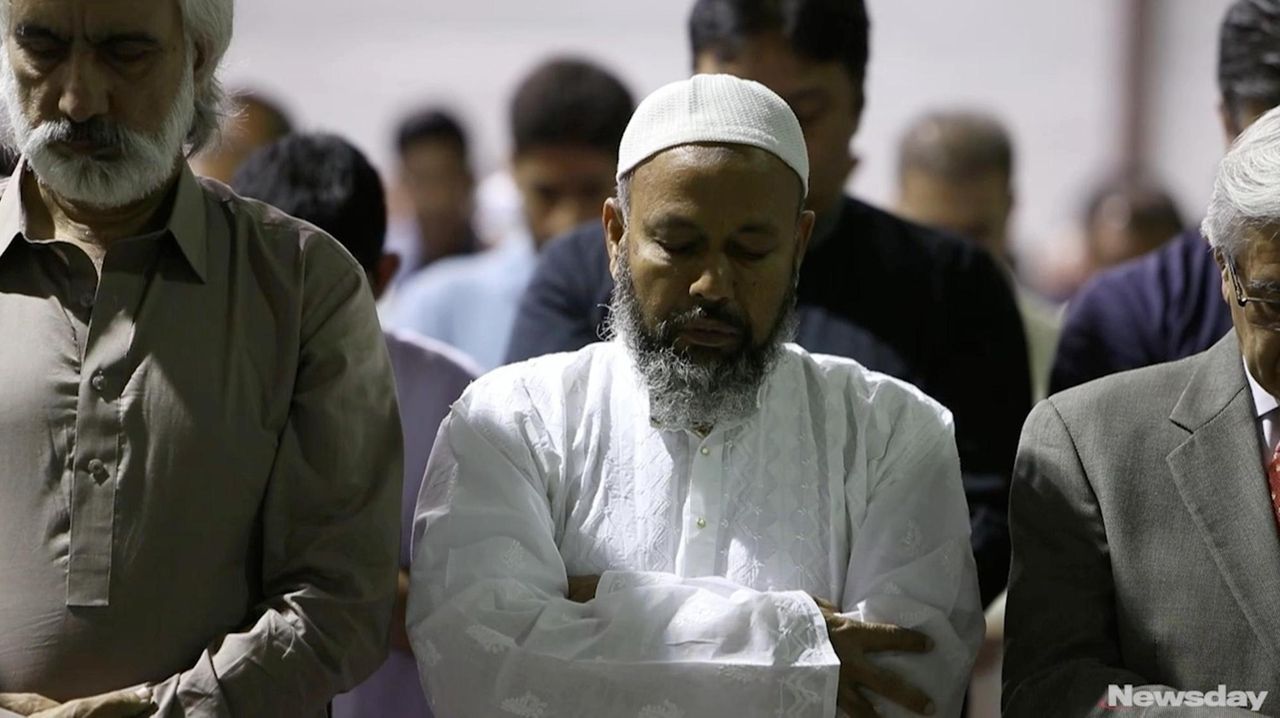 Thousands of Long Island Muslims arrived at the Mitchel Athletic Complex in Uniondale on Tuesday morning to celebrate one of the holiest days of the year in Islam. Credit: Michael Owens

Several thousand Muslims packed the Mitchel Athletic Complex in Uniondale on Tuesday morning to celebrate one of the holiest days of the year in Islam.

The faithful were marking the start of the three-day festival of Eid al-Adha, or the Feast of Sacrifice. It falls at the end of the hajj, the pilgrimage to Mecca in Saudi Arabia that all Muslims are required to make at least once in their lifetimes if they are physically and financially able to do so.

“It’s festive and it’s humbling because we start our day with prayer,” said Faisal Zakaria, 44, chief application officer at NYU Winthrop Hospital in Mineola. “It all comes back to God.”

Similar services took place at more than two dozen mosques throughout Long Island, which is home to an estimated 80,000 Muslims.

The Mitchel park event was organized by leaders of the Islamic Center of Long Island in Westbury, which was not large enough to accommodate the huge crowd, said Isma Chaudhry, president of the mosque.

The faithful lined up in long rows on plastic tarps and carpets placed on the floor of the athletic complex, which normally serves as an indoor field for soccer and other sports.

Farrah Mozawalla, director of the Asian American Advisory Board of Nassau County, said, “For our community, which is a marginalized community, to make them feel like they are accepted is so important.”

Zakaria, like many of the faithful, said he had a full day of festivities planned after the prayer service, including a special brunch, lunch and dinner with relatives and friends.

On Monday night, his family exchanged gifts, another Eid tradition, similar to Christmas Eve for Christians, he said.

His 5-year-old son got everything on his wish list, including a 500-piece LEGO set and a train track, Zakaria said.

The faithful came to the prayer service dressed in elegant traditional clothing, some of it imported from overseas.

Rizwan Qureshi, 62, a banker from East Meadow, said the service was a great event in part because it brought together Muslims from all over Long Island.

“The most important thing is we all get together as a community … and celebrate at one place,” he said.

The faithful believe that Eid al-Adha commemorates the biblical patriarch Abraham and his willingness to sacrifice his son, Ishmael, at God’s command. Abraham did not kill his son, as God spared the boy. Instead, Abraham sacrificed a ram.

During the festival, many Muslims have an animal, usually a lamb or goat, slaughtered. They usually distribute one-third of the meat to the poor and another third to relatives and friends. They keep the final third for themselves.