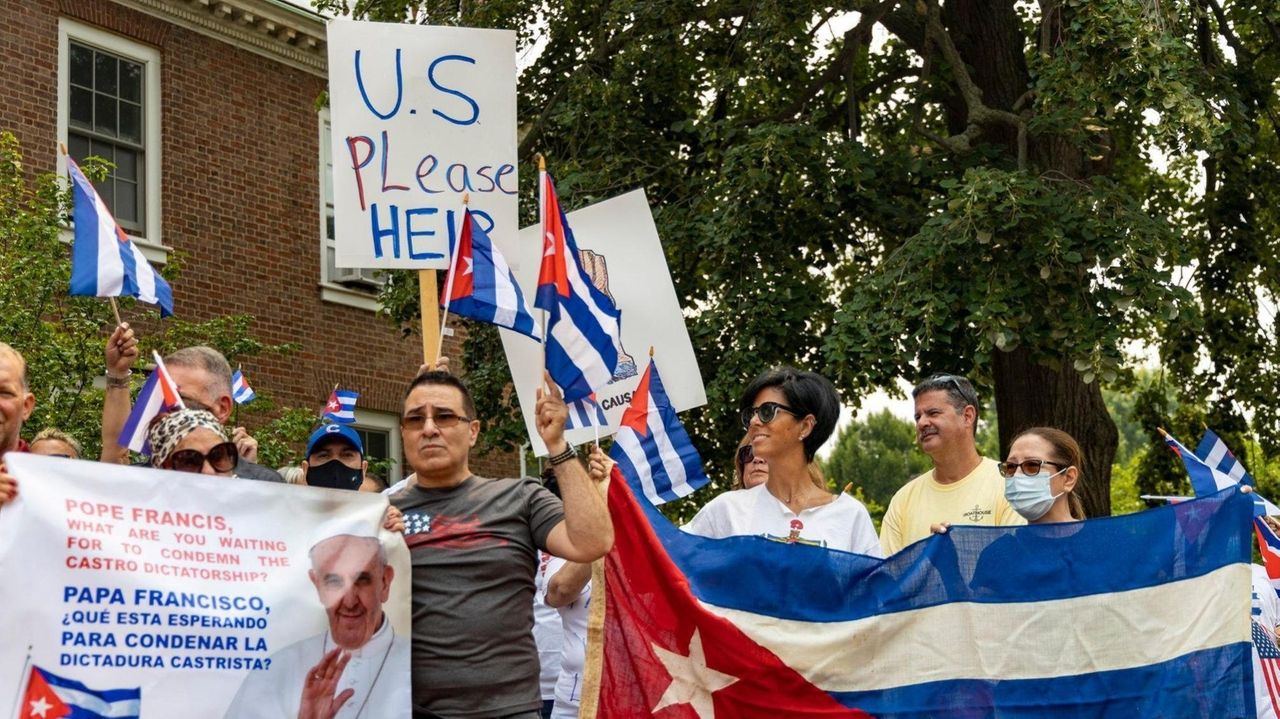 Long Island Cuban Americans rallied Tuesday in Freeport, calling on the U.S. government to impose harsh new sanctions on the Cuban government, following days of historic protests against shortages in food and medicine and economic restrictions sparked by the COVID-19 pandemic.

Waving Cuban flags and chanting for "freedom for Cuba," nearly 100 residents stood on the steps of Freeport Village Hall demanding an end to the island nation's Communist regime, arguing that its people deserve to be free. The rallygoers carried signs reading "End Slavery Now," "Free Cuba" and "U.S. Please Help," while urging the White House to take swift action to help the Cuban people.

"At this moment the people of Cuba have lost their fear of fear," said Freeport trustee Evette Sanchez, a first-generation Cuban American whose parents left the island in 1959 and opened a bodega in the village in the 1970s. "So much so that they have protested in the streets with no care of what can happen to them. All they are asking for is freedom and liberty."

The protest comes a day after President Joe Biden on Monday ordered the State Department to create a working group to review U.S. remittance policy to ensure that money that Cuban Americans send home makes it directly into the hands of their families without the regime taking a cut.

He also ordered a review of the viability of increasing staff at the U.S. Embassy in Havana following one of the communist island's biggest antigovernment demonstrations in recent memory.

Biden, who has been under congressional pressure to take action, last week called Cuba a "failed state" that was "repressing their citizens."

But Biden also suggested that taking effective action was complicated.

"There are a number of things that we would consider doing to help the people of Cuba, but it would require a different circumstance or a guarantee that they would not be taken advantage of by the government," Biden said.

With Cuba, located just 90 miles from Florida, going through its worst economic crisis in decades, thousands of Cubans took to the streets of Havana last week to protest food and water shortages, power outages and rising inflation.

The Cuban government responded by disrupting phone and internet service, arresting hundreds of Cuban protesters, according to activists and human rights groups on the island. Biden is also calling for the administration to work with Congress to identify options to make the internet more accessible on the island.

"Our Cuban American families and friends have been restricted and barred from contacting relatives in Cuba," said Robert Kennedy, the mayor of the Village of Freeport, which has a large Latino and Spanish speaking community. "This gathering is about human rights, freedom and liberty for the families of our Cuban American friends and residents."

Freeport trustee Jorge Martinez, whose family migrated from Cuba years ago, said the Biden administration should impose new sanctions on the Cuban government while building a coalition of allied nations, including Canada, Spain and Great Britain, to pressure Cuban President Miguel Díaz-Canel.

"There's been 62 years of misery, bloodshed and death," Martinez said. "What more do you want? We ask the White House to do what hurts the most. Freeze their assets and put pressure on them … The people of Cuba are dying. Children are dying. There is no food. There is no water. No medicine. This has to stop. How much longer can we have this? Enough is enough."

The Associated Press contributed to this report.