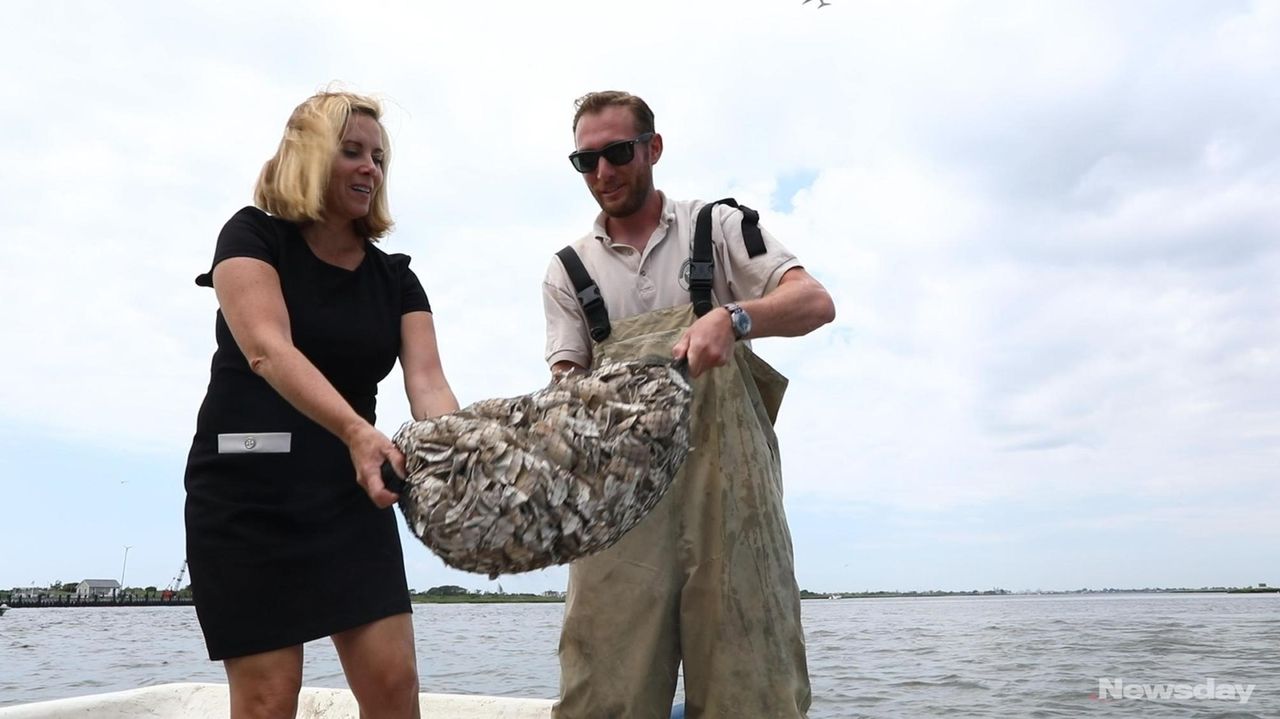 On Thursday, the Town of Hempstead announced its "Great Barrier Reef" conservation effort. Town representatives and local biology conservationists tossed mesh bags of locally sourced clam and oyster sells into waters to restore the natural barrier off the coast of Long Meadow Island "which has suffered extreme erosion over the last century," due to natural disasters, and human interaction, according to Town Supervisor Laura Gillen.  Credit: Newsday / Chris Ware

Hempstead Town and state officials on Thursday launched a "living barrier reef" made of clam and oyster shells donated from local restaurants in the waters off the West Marina in Lido Beach.

More than 5,000 mesh bags containing the discarded shells will eventually be submerged in the western bays in an attempt to restore and protect Long Meadow Island, a small barrier island, officials said. Such barrier islands in the back bays act as a "natural defense" during coastal storm surges, they said.

The reef, which will protect Long Meadow Island from erosion and allow it to rebuild, is also aimed at attracting new sea life and using living oysters to filter the waters of waste and pollution.

Salt marshes on the South Shore have “been degraded to a point that we are very vulnerable,” Kaminsky said.

Long Meadow Island’s northern end has become split from the rest of it as a result of the erosion, Gillen said.

One thousand mesh bags of shells will be dumped in the waters initially, with a goal of adding 4,000 more. Live oysters grown in the town’s hatchery will be added to the bags to create the living reef and give the oysters a new habitat, town conservation biologist Stephen Naham said.

“It is our hope that with this living reef project, we will be able to vastly restore the ability of our barrier islands, and other barrier islands, to mitigate the flooding associated with storm surges,” Gillen said.

Although the shells are being donated, the town is using a state grant of nearly $50,000 for other expenses associated with the project, such as labor and equipment, Naham said.

The town has created three artificial reefs in the back bays in the past decade, he said.