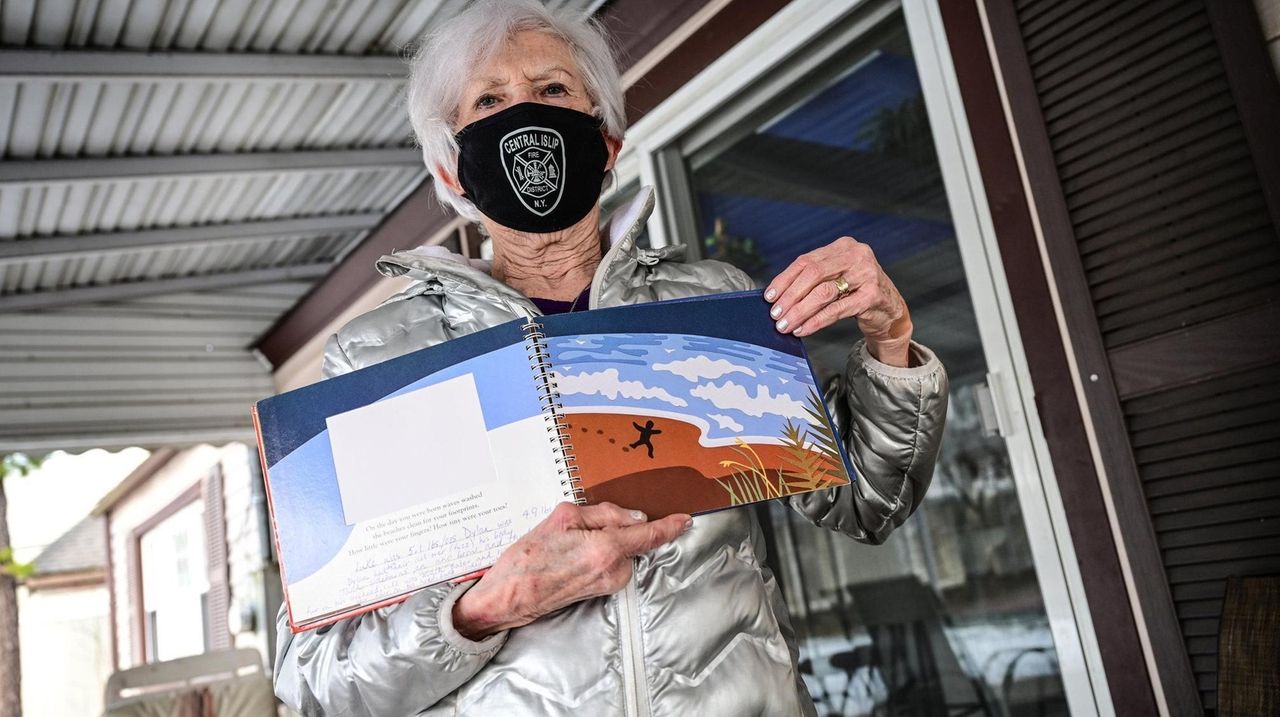 Fran McMullen told Newsday she can't wait to return a baby journal — that was lost on the Long Island Expressway and found by her son — to its owner, who had chronicled the birth of her twins in the book. Credit: Newsday / Thomas Ferrara

Katie Kenny didn’t know the book detailing the birth of her twins was lost.

What she also didn’t know was that an Islandia woman had spent the past few months looking for her.

Kenny's book, "On the Day You Were Born: A Photo Journal," was accidentally mixed in the donation crate that she had planned to donate to a Glen Cove school.

On her drive home to Sea Cliff on Thanksgiving morning, she lost the books after visiting her mother in Plainview Hospital and her father in a nearby senior care facility.

"I had been so upset that my mother just had a stroke and forgot to close the hatchback," the preschool teacher said.

The books fell and were scattered over the service road near Exit 46 off Long Island Expressway where Fran McMullen’s son, James McMullen, stopped his vehicle and picked up 18 of them.

Fran McMullen looked through the books and pieced together enough information from personal notes and handwritings to realize that they were too valuable to be lost.

The journal book, in particular, moved the 81-year-old great-grandmother.

It chronicled the birth of twin boys named Luke and Dylan.

They were born in August 2001 at Mount Sinai Kravis Children’s Hospital on Fifth Avenue in Manhattan. It was a summer afternoon amid a heat wave with temperatures rising above 100 degrees that week.

"Both of you were brought to the nursery together," their mother wrote in blue ink. "When you were put under the light because you were both cold, you spooned one another. The nurses couldn’t stop talking about how adorable you were."

Based on incomplete signatures, Fran McMullen (correctly) speculated the family’s last name and began a search. Her son James called the hospital. She looked through white pages and pleaded on social media for clues.

"It may seem like a minor thing to some people, but I would’ve felt horrible if my books were lost," she said. "These books must have meant a lot to this family."

With no leads, she emailed Newsday. (A reporter and a researcher found Kenny and connected the two women.)

"I didn’t mean for that book to go anywhere. … I would have been so upset that it got mixed up with books to give away," said Kenny, 51. "It’s one of those things I’m so pleasantly surprised by the fact that people took the time to [find me]. It just means so much to me."

The grateful mother of three said to be reunited with the books also felt like a message from her parents, who died in recent months.

Nearly two decades ago, her parents William and Anne Olcott waited downstairs with other relatives when the twins were born and helped her raise them, Kenny said.

"It’s like one of the little signs from my parents that they are still around," she said, choking up as she spoke. "This is one of the biggest ones because my mom … would have been heartbroken for it to end up on the street."

"On the Day You Were Born"