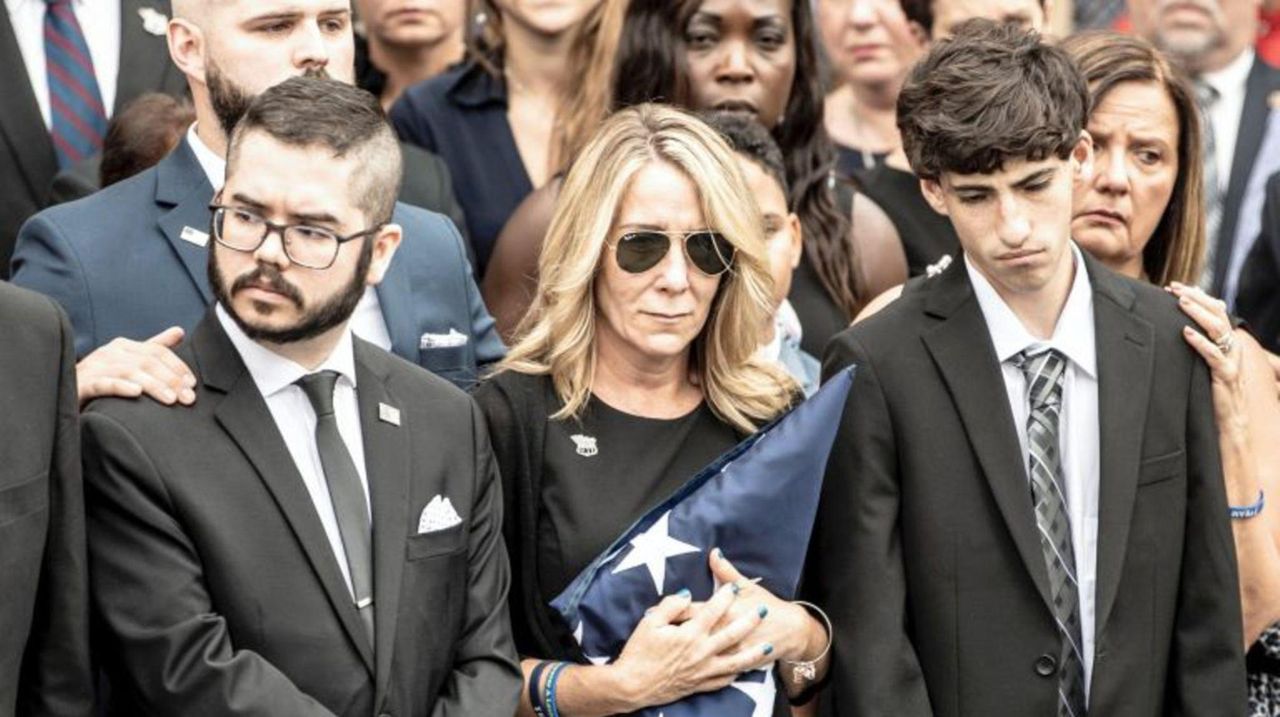 Retired NYPD Det. Luis Alvarez of Oceanside, who became an outspoken advocate for 9/11 first responders suffering health ailments from their time working at Ground Zero, was remembered at Immaculate Conception Roman Catholic Church in Astoria, Queens, by family, politicians and law enforcement officials Wednesday as an American hero "who always worked on the brave side of the line." Credit: Newsday / Yeong-Ung Yang; News 12 Long Island

A fire somewhere deep inside that fueled retired NYPD Det. Luis Alvarez as he kept up the fight for 9/11 first responders never dimmed, even as he lay dying in a Rockville Centre hospice from the cancer he contracted at Ground Zero.

At Alvarez's funeral Wednesday inside a packed Immaculate Conception Roman Catholic Church in Astoria, Queens, his sister's eulogy touched on a final display of selflessness by her brother before his life ended Saturday.

He grew agitated and tried to lift himself from his bed, Aida Lugo told hundreds of mourners, among them, cops, firefighters, NYPD brass and comedian/activist Jon Stewart.

“I was walking to find the first responders,” Lugo recalled Alvarez, 53, of Oceanside, telling her and a nurse, “to make sure they got help.”

Her brother left the world as he lived in it.

He “marched to the beat of his own drum,” Lugo said.

She also described a side of Alvarez his fellow cops knew well but countless others only discovered in the weeks before he died — a low-key but relentless will to see that the nation never forgets the sickened heroes of Sept. 11, 2001.

“As one of my brother’s beloved previous partners once shared with me, 'Louie was the quietest man I worked with but in the end he made the most noise,' ” said Lugo, whose eulogy  drew a standing ovation and applause that bounced  off the church walls.

Decimated by colorectal cancer in the weeks before his death, Alvarez with his frail frame and deep-set eyes became a lasting symbol of efforts to have Congress  replenish the Sept. 11th Victim Compensation Fund. The $7 billion fund has provided benefits to first responders and volunteers struggling with debilitating illnesses linked to toxic chemicals inhaled at Ground Zero, but payments to the afflicted have been slashed by as much as 70 percent. 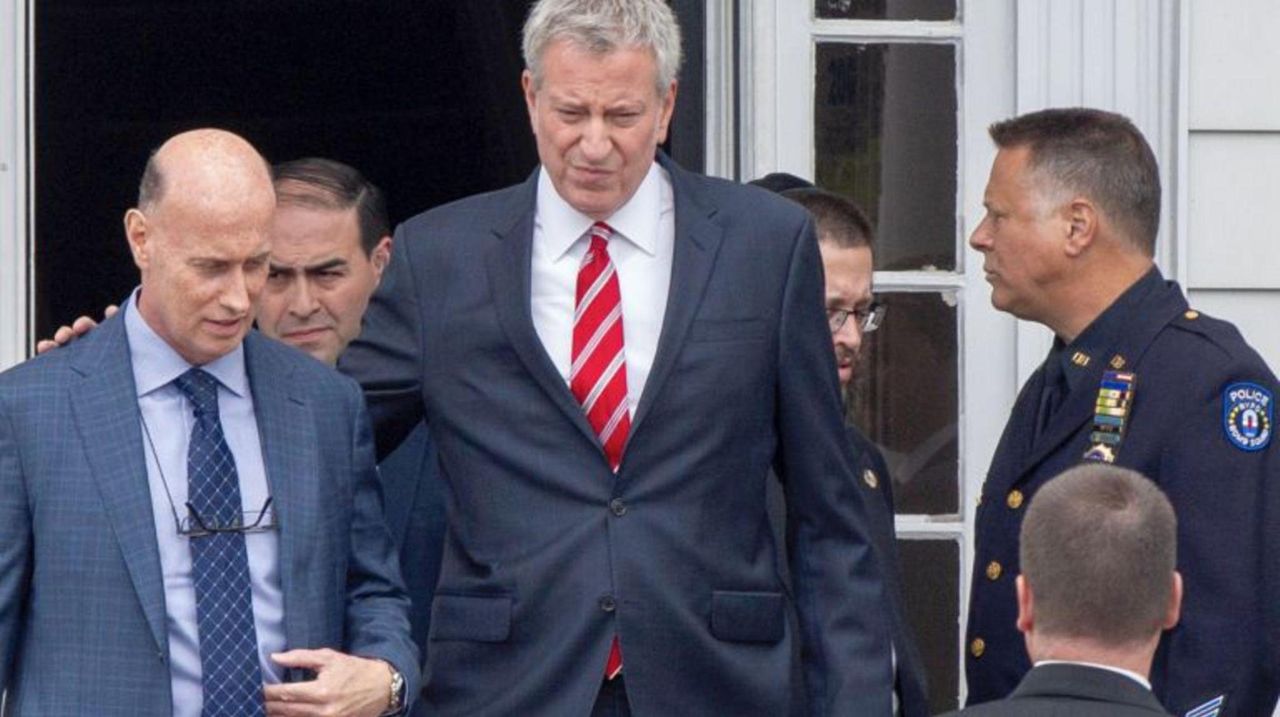 Hundreds attend wake for fallen NYPD first responder Hundreds of mourners lined up outside the Towers Funeral Home in Oceanside for the wake of Luis Alvarez, a former NYPD detective and 9/11 victims advocate. Relatives and colleagues said Alvarez battled to the end to remind a nation that vowed to “never forget” that first responders continue to struggle with diseases linked to the terrorist attacks. Credit: Howard Schnapp

With Stewart by his side on June 11, Alvarez spoke into a microphone in a voice barely above a whisper as he made what would be his final plea to a House Judiciary subcommittee to replenish the shrinking fund.

Stewart's subsequent plea to the committee, where he lashed out at members who missed the hearing, has been widely credited for spurring legislators into action. The full House is expected to vote later this month on legislation ensuring that benefits will continue for 70 years. Senate Majority Leader Mitch McConnell (R-Ky.), after blistering criticism from Stewart, said he will allow an August vote on the bill.

A somber-looking Stewart attended the funeral but declined to speak to the news media out of respect for the Alvarez family.

Rep. Peter King (R-Seaford), who joined Rep. Carolyn Maloney (D-Manhattan) and Rep. Alexandria Ocasio-Cortez (D-Queens) at the funeral, said many of his colleagues initially looked at the 9/11 fund as a "New York scam.”

Alvarez, gaunt and gray-skinned when he testified before the congressional panel, changed the opinions of many lawmakers, King said.

“When they actually saw the extent of the suffering and that he was so … gutsy, there was a dramatic turnaround,” King said Wednesday outside the church. “He became the human face of 9/11.”

“I think this transcends politics,” she said.

New York City Mayor Bill de Blasio, a candidate for the Democratic nomination for president who was in Iowa Wednesday, did not attend the funeral. The mayor said earlier this week that he would award Alvarez a key to the city posthumously.

"His memory will live on through his advocacy and all he’s done for our first responders and our city,” de Blasio spokeswoman Freddi Goldstein said of Alvarez.

De Blasio was scheduled to get a walking tour of Iowa City Wednesday with its mayor, Jim Throgmorton.

In a statement, a spokesman for Gov. Andrew M. Cuomo, who did not attend the funeral, praised Alvarez.

"Mr. Alvarez was a hero who never stopped fighting for his fellow first responders," the spokesman, Don Kaplan, said.  "The funeral was a private event and we respect that and believe the best way to honor his memory is to keep fighting to ensure the federal government provides Ground Zero survivors with the benefits and support this nation owes them."

In her eulogy, Lugo said that shortly after Alvarez graduated from Monsignor McClancy Memorial High School in Queens, he announced to his family — without notice — that he had enlisted in the Marine Corps.

After serving six years in the military, he joined the NYPD, first serving in uniform patrol at the 108th Precinct in Long Island City and then moving to the Queens Major Case Narcotics Squad, where he worked undercover, earning a gold shield and later promoted to a first-grade detective. He would go on to join the NYPD's elite Bomb Squad.

On Sept. 11, 2001 Alvarez joined thousands of other first responders at the World Trade Center, desperately digging through the rubble and searching for survivors. He spent the next three months working on the pile of toxic rubble.

"It became my brother's dying wish; the legacy he wanted to leave that the bill passing the victims compensation fund  be passed," Lugo said.

Alvarez's oldest son, David, told, mourners: "Before he was an American hero, he was mine, he was my hero, the one I wanted to make proud.”

At the funeral's end, hundreds of uniformed police officers stood at silent attention along Ditmars Avenue as the Cuban immigrant’s coffin was rolled out of the church and placed in a hearse.

The drums of the NYPD’s Emerald Society Pipes and Drums echoed along the crowded commercial strip.

Hundreds attend wake for fallen NYPD first responder"His message was really simple," said Luis Alvarez's brother, Phillip. "Take care of each other and take care of yourselves." Luis Alvarez dies of 9/11-linked cancer at 53Ex-NYPD cop from Oceanside joined Jon Stewart weeks ago to urge Congress to extend the 9/11 Victim Compensation Fund. Jon Stewart lashes out at Congress over 9/11 fund

The former talk show host was angered that only six lawmakers were at a subcommittee hearing to hear first responders' appeals.