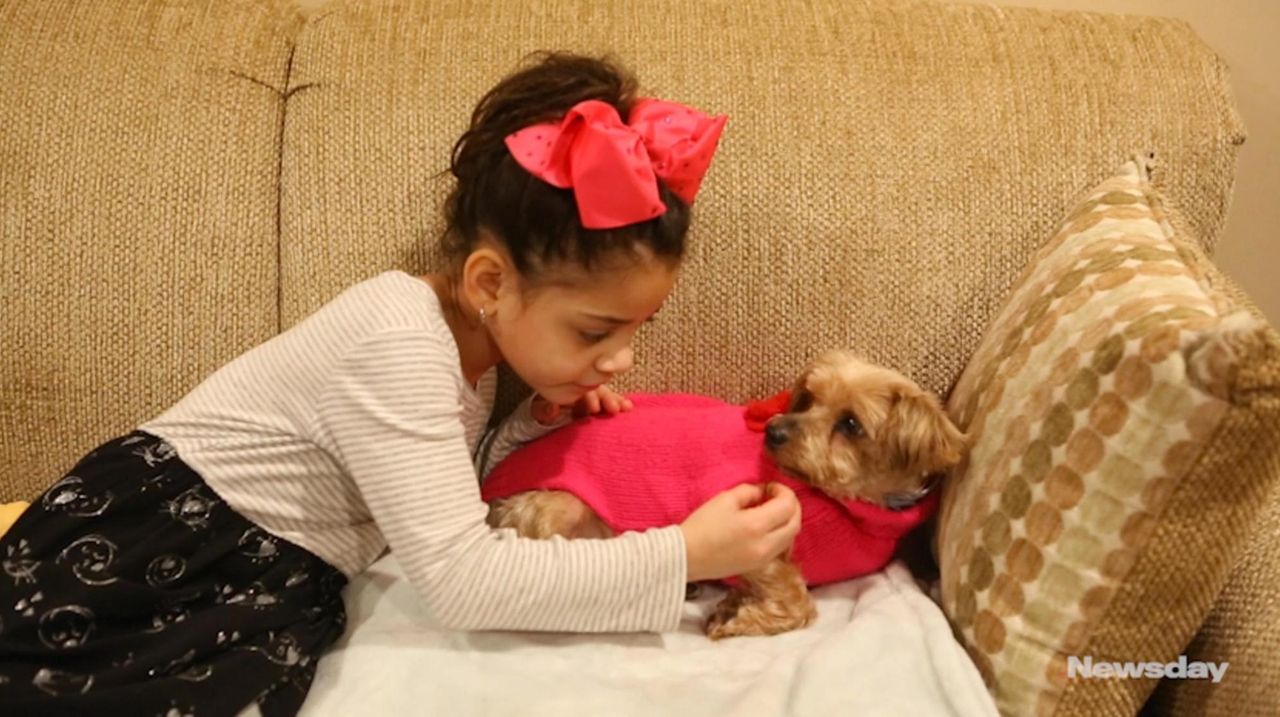 Sondra Toscano of Nassau County on Friday explained how her daughter Lydia Toscano, who was adopted as an infant, bonded with their adopted dog Venus, a 6-year-old Maltese-Yorkie mix, who was rescued in January from a shuttered Missouri puppy mill. Credit: Newsday / Shelby Knowles; Photos courtesy Sondra Toscano

Earlier this year Lydia Toscano’s parents granted her wish for a sister — a four-legged one — who shared a common trait.

Adopted as an infant, Lydia, now 7, got the word early on about her origins, said her mother, Sondra Toscano, a support magistrate in Nassau County family court. A dog lover herself with three earlier rescues in their Nassau home, Toscano knew her only child would appreciate that “she wasn’t the only adopted person in the house.”

In April, the two came across an entry on the website of Posh Pets Rescue, which runs the Long Beach animal shelter, for Venus, a 6-year-old Maltese-Yorkie mix rescued in January from a shuttered Missouri puppy mill.

“We fell in love. Her soulful eyes called out to us even through a photograph,” Toscano wrote in a statement she submitted to the Petco Foundation’s sixth annual Holiday Wishes campaign, which highlights stories of how adopted pets can change lives for the better. Their tale was one of 51 honored in the foundation's first round of funding, getting $5,000 for the rescue and $50 for the family to spend at the pet store.

Now, Posh Pets could get $25,000 more if this Long Island love story is the top vote-getter in the foundation's People’s Choice Award. Voting is open to the public through 1 p.m. Wednesday at petcofoundation.org/vote. There are two $10,000 and two $5,000 grants for the rest of the top five. The results will be revealed before Christmas.

"She wanted to adopt a dog because she's adopted," Toscano said in an interview. "And she wanted a special connection with someone — or something."

Lydia and the shy, tentative Venus have gone on to become “two kindred spirits,” Toscano wrote. Venus curls up next to Lydia in bed, and Lydia delights in singing her original songs, with lyrics such as:

“Venus, you are my heart. Venus, you put my heart back together when it is broken. You are so beautiful. I love you. I will never leave you.”

Toscano said she submitted the story and a video of the song to “spread the word that miracles can happen.” She would like there to be a nationwide program matching adopted children with adopted dogs.

The foundation has awarded $755,000 in grants to the animal welfare organizations cited in those 51 stories. The first-place winner of the initial round was Annagrace Myers, 16, a survivor of the Parkland, Florida, school shooting, who got $100,000 for a local shelter with her story of a dog helping her cope.

“It’s truly inspiring reading story after story about how the love from an adopted pet changed so many lives in different ways,” said Susanne Kogut, Petco Foundation president, in a release announcing the first round of winners last month. For the groups receiving grants, “it’s like a visit from Santa Claus.”

The $5,000 grant is certainly welcome, said Linda Vetrano, Posh Pets' founder, who fostered Venus in her home and was there for the first meeting of Lydia and her soon-to-be adopted sister. Venus won their hearts over three other dogs there. When Vetrano found out Lydia was adopted, "the story just got nicer," she said.

And for Lydia, that first meeting is her fondest memory, when Venus, even though she seemed nervous, came over and “she put her paw up on me.”

With her new big sister's help, the nearly toothless and formerly malnourished Venus is responding to the songs and caresses, gradually finding a place in the family pack. She's “learning how to be a dog,” Toscano said, doing even simple things, such as licking Lydia’s fingers.

In fact, Lydia says her favorite things are "when she nibbles on my fingers and when she curls up next to me.”

Toscano said her daughter  “runs into the house after school because she can’t wait to spend time with her new sister.”

Toscano sees Venus as a “gift for my daughter to help her understand what we have been telling her all along: that an adopted family member is no different than a biological family member, you love them just the same.”

"I think that she's really learned that lesson with Venus," Toscano said. "And I think Venus has learned some lessons from us, too."

Vote for your favorite by Wednesday at 1 p.m.