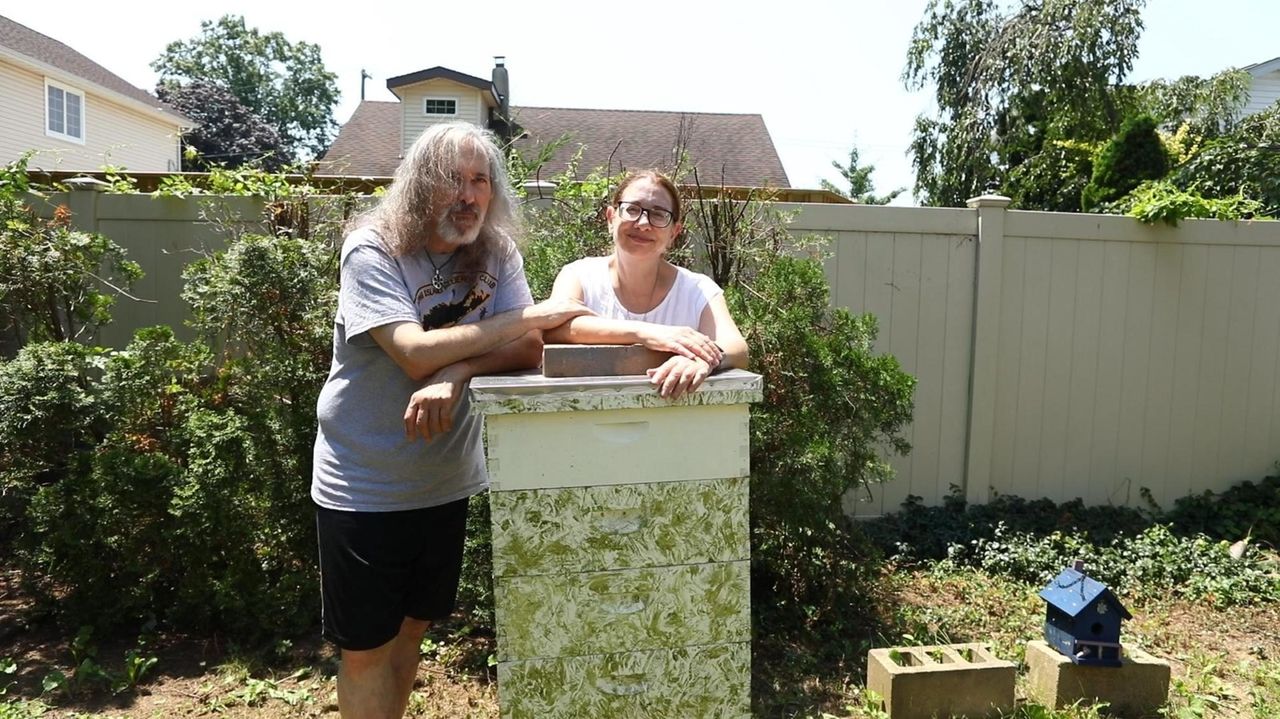 Two Lynbrook beekeepers say they plan to sue the village of Lynbrook after officials seized their hive and 20,000 bees last month, calling it an "infestation." Daryl Altman and her partner, Robert Shepard have kept bees in a box hive in their backyard since April 2016 Credit: Newsday / Marcus Villagran

Two Lynbrook beekeepers say they plan to sue the village after officials seized their hive and 20,000 bees last month, calling it an “infestation.”

Daryl Altman, 61, and her partner, Robert Shepard, 58, have kept bees in a box hive in their backyard since April 2016. Lynbrook Mayor William J. Hendrick said the seizure occurred after the village received a neighbor’s report of bees swarming in their garage and children’s play equipment, adding that the village assumed the bees on the neighbor’s property came from Altman’s hive.

Acting on a section of village code that says “grounds, buildings and structures shall be maintained free of insect, vermin and rodent harborage and infestation,” officials sent notices to Altman requesting to inspect the property.

Altman’s attorney, J. Lee Snead of Bellport, wrote back to the village, saying the bees were not an infestation, and the village employee or consultant was not allowed to enter the property or remove anything from it.

Prompted by a doormat at Altman and Shepard’s front door that reads “Come back with a warrant,” officials obtained a search warrant from the village court justice, Village Attorney Peter Ledwith said.

On June 26, village officials — including a police officer — and a beekeeper seized the hive and vacuumed up about 20,000 bees while the couple was at work. The bees were taken to the Queens County Farm Museum. The village then sent Altman a bill for $308.50 for the removal and returned the empty hive to Altman, which she keeps in the backyard.

Hendrick called the bees “dangerous” and said residents could get stung and go into anaphylactic shock from an allergic reaction. Village documents, including the search warrant addressed to Altman, which she provided to Newsday, do not report any bee stings related to her hive, and Hendrick also said he was not aware of any stingings.

“In a residential area, it’s not allowed,” Hendrick said. “It’s not like a trained bee will go to its master.”

Village officials and the couple gave differing accounts about how many times inspectors went to the home and if they discussed the situation before the bees were removed.

Altman and Shepard say they plan to sue soon, but they have not yet decided in which court to file, Altman said. James Doan, a member of the Empire State Honey Producers Association’s board of directors, said he’s never heard of a government seizing bees.

Local governments may have their own laws about beekeeping operations within their boundaries, according to a spokeswoman for the state Department of Agriculture and Markets. She added that while the department “works closely” with beekeepers across the state, it “does not directly regulate hobby beekeepers” under state law.

There are about 3,000 hobby beekeepers in New York, according to state Department of Agriculture and Markets estimates. The department did not have an estimate of how many are on Long Island.

“Grounds, buildings and structures shall be maintained free of insect, vermin and rodent harborage and infestation.”

Barge off Long Beach surveys best route for wind-powered cable
Omicron: On the front lines
Forecast: Rain, then snow for morning commuters
Forecast: Up to 3 inches of snow for parts of LI
Wounded toddler the latest victim as NYC shootings spike
Teen testifies Uber driver asked her out for drinks, canceled her planned route
Didn’t find what you were looking for?