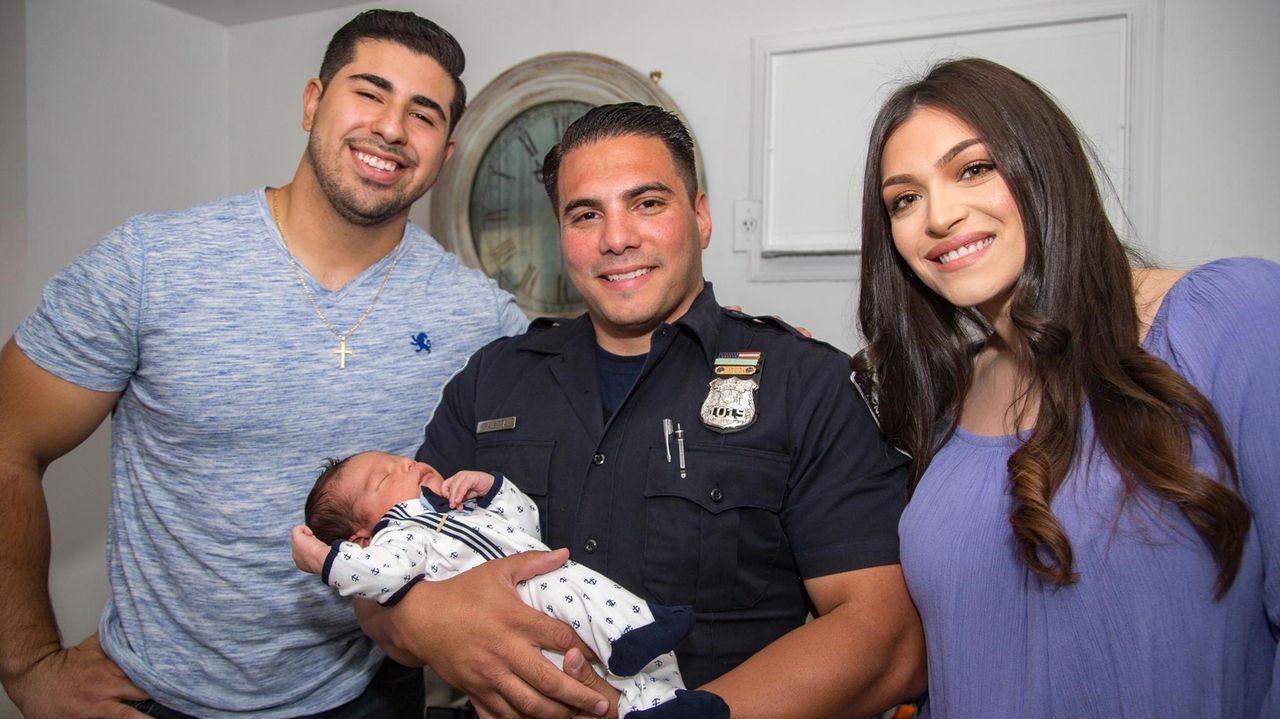 Lynbrook Police Officer Anthony Falsitta, who helped deliver the baby of Ray and Rebecca Mansour in May after answering a 911 call, reunited with the couple and their nearly 4-week-old son Ray Jr. at the family's home in Lynbrook on Monday, June 26, 2017. Credit: Newsday / Taylor Swaak; Howard Schnapp

In Ray and Rebecca Mansour’s minds, their second child’s birth was going to be like the first: at a hospital.

In reality, a local police officer helped deliver the Lynbrook couple’s baby in their bathroom in less than five minutes.

Lynbrook Officer Anthony Falsitta, 31, visited nearly 4-week-old Ray Jr. for the first time on Monday, bearing a Justice League gift bag containing Superman booties and a blanket. He took Ray Jr. in his arms as the infant slept in his navy-and-white onesie and bow tie.

“He’s cute,” said Falsitta, cracking a smile. “To tell you the truth, when he was born I didn’t really get to see his face.”

It all happened so quickly, Rebecca Mansour recalled. She had awakened around 2:30 a.m. on May 31 with slight pain, and by 4 a.m. it had become “unbearable,” she said. Ray Mansour left the house about three hours later to drop off their daughter, Scarlett, with his mother-in-law, he said, and intended to come back and drive his wife to the hospital.

Falsitta was around the block and responded first, before two other officers and an ambulance. He and the expectant father arrived at the same time and found Rebecca Mansour in extreme pain.

There was some awkwardness hanging in the air, Ray Mansour admitted, but Falsitta said he knew he needed to examine Rebecca.

“God forbid the baby came out on the floor, I didn’t want that,” Falsitta said, noting there was stress from “dealing with something where you can possibly make the situation worse.”

Though he hadn’t taken training on how to help deliver a baby for four years, Falsitta — a father of two — jumped into action when he saw the baby’s head crowning.

The two other cops who responded reiterated the speed of the delivery, joking that one second the baby wasn’t there, and the next second he was.

“It was like a magic trick,” Officer Antonio Cobucci said of the baby’s entrance.

There were no complications during the birth, the couple noted, and Falsitta was able to clear the baby’s airway by holding him face down and patting his back.

“He had great instincts, that’s all I can say,” Ray Mansour said, turning to Falsitta with a smile.

Police officers get calls they’ll always remember — often because they “aren’t good,” Falsitta said. But this one was different.

“This is definitely a good story that I’ll take [with me for] the rest of my life,” he said.