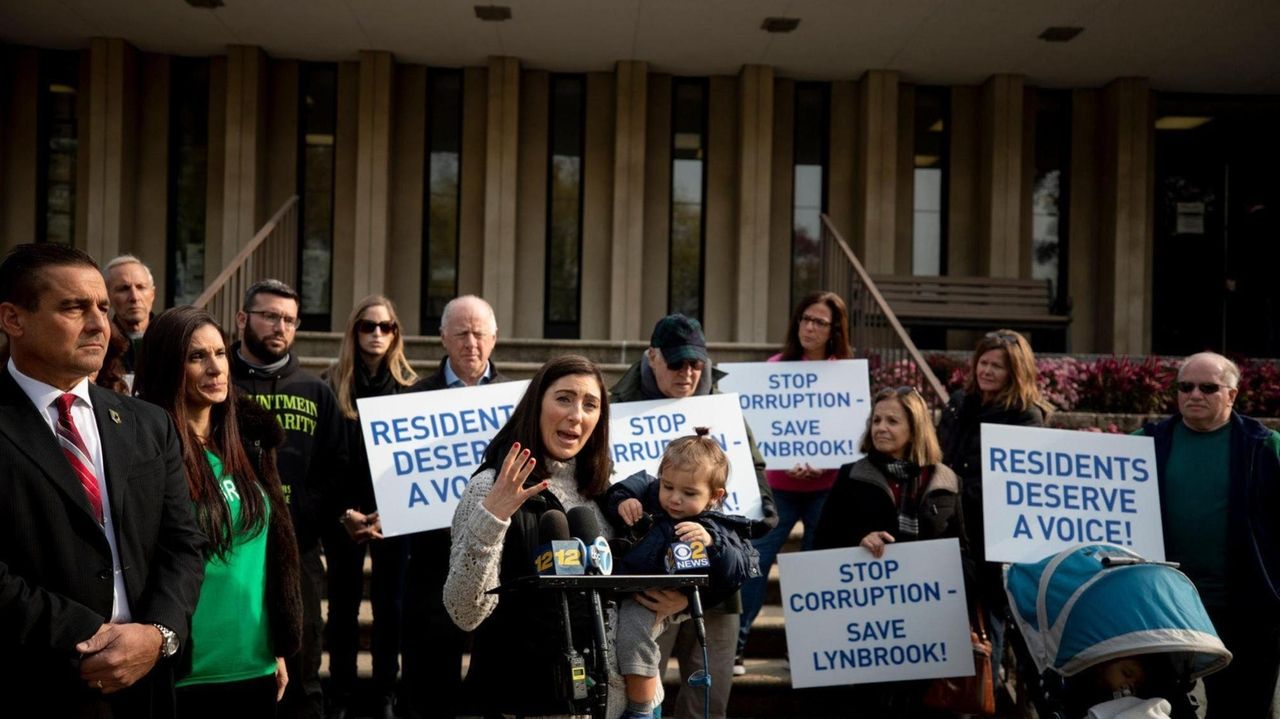 Lynbrook residents and officials held a rally outside Lynbrook village hall on Monday, to express their opposition to a proposed housing development. Later that night, at a meeting of the village board of trustees, the proposal was debated and ultimately rejected. Credit: Newsday / Yeong-Ung Yang; Todd Maisel

The Lynbrook Village board of trustees this week rejected a proposal to build a six-story, 200-unit apartment building near the village train station, saying the project was too big for the community.

The 5-0 vote on Monday followed weeks of community strife over the $75 million development, with anonymous mailers decrying the project appearing in mailboxes, allegations of corruption lobbed by opponents on the steps of village hall and a “circus atmosphere” briefly pervading the sleepy Nassau County village.

“The actions of some to lie and to misinform residents in the past three months [were] appalling, creating a circus atmosphere that hasn't been seen down at village hall in 12 years,” village resident Rosemarie Curran said at the packed board meeting Monday night.

Anthony Bartone, the developer behind the project, said after the vote Monday that the company remains “steadfast in our resolve to see this project come to fruition” and will do additional outreach “to engage the community to get more involved in the process.”

Mayor Alan Beach said the board would consider a smaller version of the project if proposed.

Terwilliger & Bartone of Farmingdale, which built a similar transit-oriented development in Farmingdale, proposed the Cornerstone at Lynbrook in August.

The apartments would be in the heart of downtown and a short walk from the Lynbrook train station, which the project's boosters said would attract millennials and empty-nesters.

The building, located on a parking lot at Earle Avenue and St. James Place, would also add hundreds of thousands of dollars in annual tax revenue, and the developers planned to build a parking structure nearby to make up for the lost spots, Bartone said.

Such perks earned the support of some residents and local organizations.

“We see it as a bolster to our downtown,” said Stephen Wangel, vice president of the Lynbrook Chamber of Commerce, which endorsed the project.

But others said the new residents would clog roads and crowd schools, and that the building would detract from the area’s suburban character.

“If this goes through, it's really going to change my way of life, not to mention the community character of Lynbrook,” said Antoniella Tavella, who leads the Lynbrook Community Alliance, a community group opposed to the project.

The opposition campaign became more heated in October, when anonymous mailers about the project warning that “our quality of life in Lynbrook is under attack” began circulating in the village.

In October, Beach asked the trustees and village attorney in a letter to disclose any possible conflicts of interest related to the project.

Village Attorney Thomas Atkinson wrote that he co-owned a property adjacent to the Cornerstone site, which he was in contract to sell to Terwilliger & Bartone, and that he has recused himself.

Atkinson also wrote that Deputy Mayor Hilary Becker, who owned four adjacent parcels, had discussed entering into a development agreement for their properties in late 2017 and early 2018.

Becker wrote that he sold his properties in July. He said in an interview that he sold them to Bradford Mott, but still keeps his real estate business in one. He said he did not know Mott’s plans for the land.

Becker said his recent land holdings on the block did not pose a conflict of interest, and that he would not recuse himself.

Becker, whose father was the former mayor of Lynbrook, was the only village official to appear at a rally opposing the project on Monday before the meeting.

Standing before a crowd with signs reading “Stop Corruption — save Lynbrook!,” Becker said “I stand in support of these residents.”

“I've been listening to their concerns, and they're serious concerns,” he said.

Bartone said that he also had discussions with Becker in the spring of 2018 about purchasing Becker’s properties, but Bartone terminated the negotiations when he learned that Becker was also talking to other possible buyers after they had agreed to the terms of a sale.

Becker did not respond to a request for comment Tuesday.