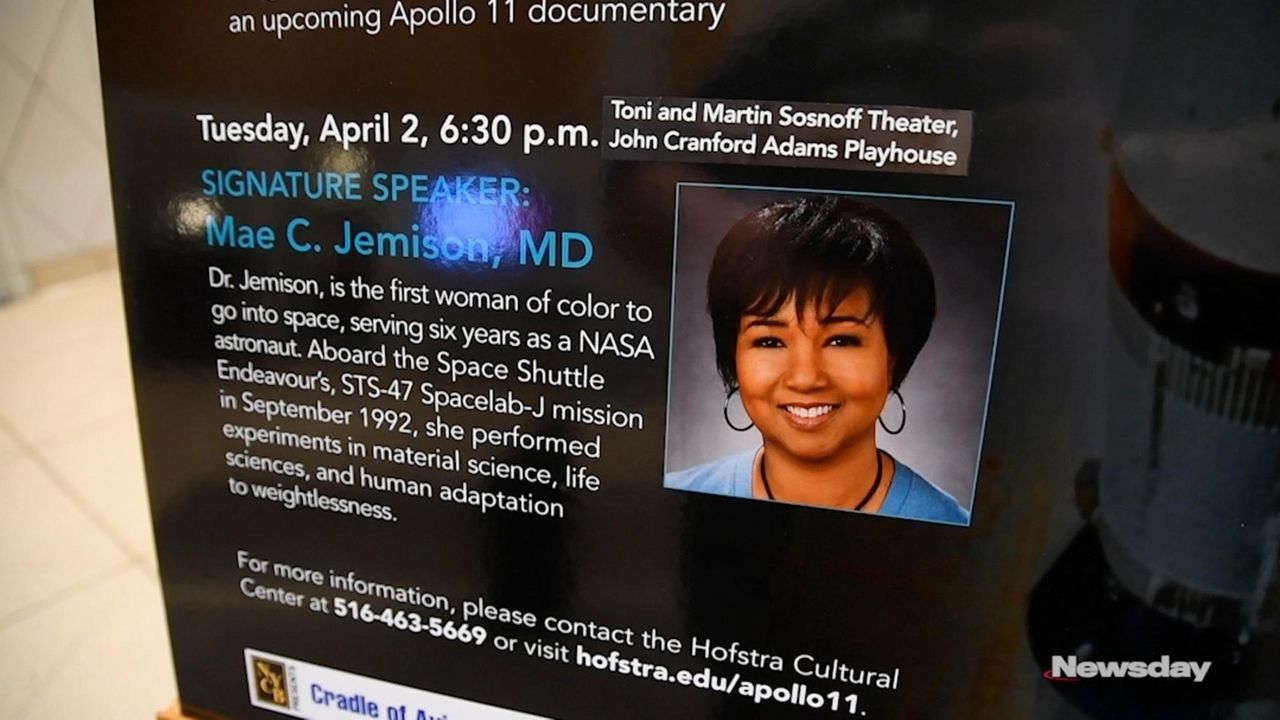 Dr. Mae C. Jemison is the first black woman to travel into space, serving six years as a NASA astronaut. On Tuesday, she spoke at Hofstra University about her experiences.  Credit: Newsday / Thomas Ferrara

Interstellar travel — the movement of humans between stars — is likely the next frontier in space exploration, said Dr. Mae Jemison, the first black woman to travel into space. But the journey, she said, will require input from a diverse group of committed people from all disciplines and walks of life.

"If we don't have the full perspective of what's going on in the world, we're going to lose things," she told a crowd of about 650 people Tuesday evening at Hofstra University's John Cranford Adams Playhouse to mark the 50th anniversary since the spaceship and crew of Apollo 11 landed on the moon . The event, One Giant Leap: Apollo 11 @ 50, is a two-day symposium organized by Hofstra and the Cradle of Aviation Museum in Garden City.

Jemison, 62, an Alabama native raised in Chicago, was a NASA astronaut herself for six years and  in 1992 became the first black woman to travel into space, on Space Shuttle Endeavour's STS-47  Spacelab-J mission, the nation's 50th space shuttle launch.

On Tuesday evening, she pitched a new interstellar project she is a part of — 100 Year Starship. That project seeks to make "human travel beyond our solar system a reality within the next 100 years."

Her 50-minute address was part of a series of events to commemorate when astronauts Neil Armstrong and Buzz Aldrin walked on the moon in July 1969. But her words highlighted the roles of unsung contributors to what was at the time considered the height of human scientific achievement.

Women capably endured the grueling testing that scientists designed to determine how well humans could stand up to the forces of space travel. Some women served as mathematicians for NASA projects, such as the three black women featured in the hit 2016 film "Hidden Figures."

"Women were the computers," Jemison said. That's why, she said, "It's so strange when we say that girls aren't good at math."

Jemison accented her speech on inclusiveness in the sciences with quotations from a wide-ranging group of historical figures, citing a Yoruba proverb and quoting people as diverse as the blind-deaf author and activist Helen Keller, Harlem Renaissance-era novelist Zora Neale Hurston and Martinican-colonialist psychiatrist Frantz Fanon.

Human space travel to the nearest star to Earth besides the sun — Alpha Centauri, which is 25 trillion miles or 4.2 light years away — would require an "inclusive, audacious" approach, Jemison said.

Interdisciplinary approaches that would harness the fruits of not only space scientists but also specialists in food and clothing and other fields to facilitate enormously long journeys would have to be involved, she said, calling for input from people from all races and regions of the world.

She said human behavior — the interpersonal conflicts —  are the main impediment to the success of such an ambitious project. The challenges of interstellar travel "really mirror the challenges that we face in the world today on this Earth," she said. "For space exploration to reach its full potential to benefit people, it has to be widely disseminated, and it has to have a shared diversity of people and it has to be accessible."

1:32 'I feel protected': LI vaccine sites expand access to COVID-19 shots
1:39 LIRR gets pushback about service cuts
Homebound patients face obstacles getting vaccinated
Pauline Hribok, true baseball fan and Mets devotee, dies at 93
What you need to know about COVID-19 vaccine development
3:04 Nassau DA: Doctor charged with murder in deaths of 5 patients
Didn’t find what you were looking for?