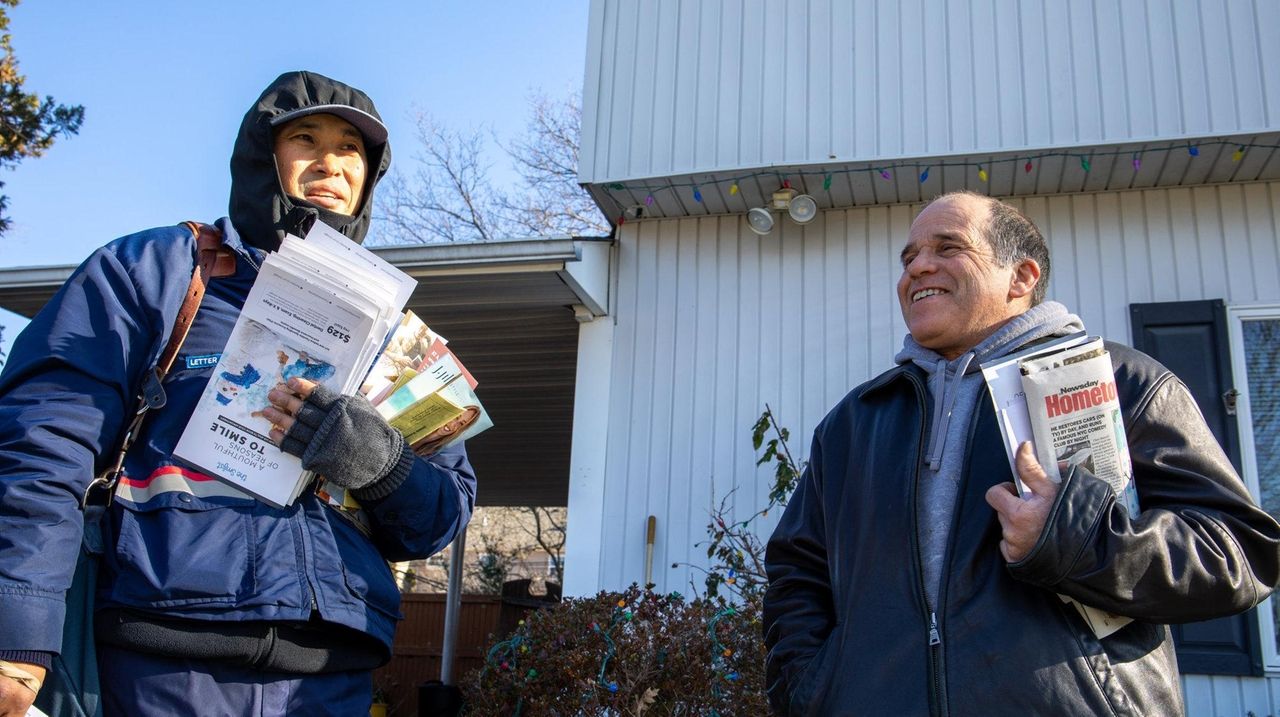 The holidays are the busiest time to mail packages. Newsday followed around Jong Kwon, a letter carrier from the Syosset Post Office, as he delivered packages during the holiday rush.  Credit: Morgan Campbell

Parked against the curb in a quiet Syosset neighborhood, letter carrier Jong Kwon opened the back of his truck and filled his arms with packages.

“Hey Harvey, how are you?” Kwon, 39, called out from the road to his customer, 74-year-old Harvey Kirschner. “I’ve got a lot of packages for you.”

“I’m sure you do,” Kirschner said, standing outside his house in 26-degree weather last Thursday, later adding, “’Tis the season.”

Kwon delivered packages and letters last week to customers during what the United States Postal Service says is its busiest week of the season.

“This time of the year is the holiday season, all the kids expecting their gifts from Santa Claus,” said Kwon, of Westbury. “Sometimes I feel like I’m a Santa Claus of a postal [worker].”

Even on a bitter cold and windy day — including last Thursday, with wind chills in the single digits — Kwon embarks on his daily shift that includes roughly five hours of walking in the cold to deliver letters, greeting cards or packages to people’s doors in time for the holidays.

He said this year has been one of the busiest holiday seasons he’s had in his 15-year career with the postal service.

“We see a lot of packages from all over the country, to deliver to their loved ones, families and friends for the holiday gifts,” Kwon said. “It’s really fun to... deliver to a customer and you see the joy when they get the package.”

Kwon’s day started around 6 a.m. He did one early-morning round to deliver just packages, then came back to the post office to refill his truck with letters and other packages for a second run.

At the post office in its back room, Kwon’s station has four shelves with dozens of mail slots. Each had letters and envelopes ready to be pulled down and packed for the truck, in the order of his route.

Dioenis Perez, the postmaster in Syosset, said many postal workers work overtime and sometimes work seven days a week during this season, including Kwon. (Kwon’s so busy he says he does most of his shopping online and has it delivered to him.) People at mail processing plants are working around the clock during the holidays, and some clerks start at midnight to get a jump on the sorting process, Perez said.

“It’s our most challenging part of the year, only because the influx of parcels is hard to gauge,” Perez said. “Every year it’s different. This year, it’s been a really busy season for us.”

Out in the neighborhood, Kwon goes quickly from house to house on foot, completing one side of the street, then the other.

He had his satchel draped across his shoulder and his wind-breaking Postal Service uniform gear on. He wore a hat with a hood over it, and a high neck underneath to stay warm. But even on cold days like last Thursday, he only wears a glove on one hand — it’s easier to grab the mail and packages that way, he said.

Kwon said his favorite part of the job is interacting with the customers. Some of his customers will wait for him at the door and they’ll have a chance to catch up on each other’s lives, he said — although Kwon adds that it’s important “not to spend too much time.”

The number one priority is to make sure people get their package safely and timely, he said.

But for customers like Kirschner, he said he’s gotten to know Kwon. They catch up whenever they see each other, often talking about the Yankees.

“Just a minute or two, and then he goes on his way,” Kirschner said.

“He’s a nice man,” Kirschner adds. “He’s got a great personality, and I’ll be honest with you, regardless of the weather or anything, he’s always pleasant.”

Kwon waves or says “Happy Holidays” to some he sees through the door or window as he goes through his route. Sometimes he gets holiday cards from customers. One time, Kwon recalled, a customer’s child drew him a picture and gave it to him as a Christmas card.