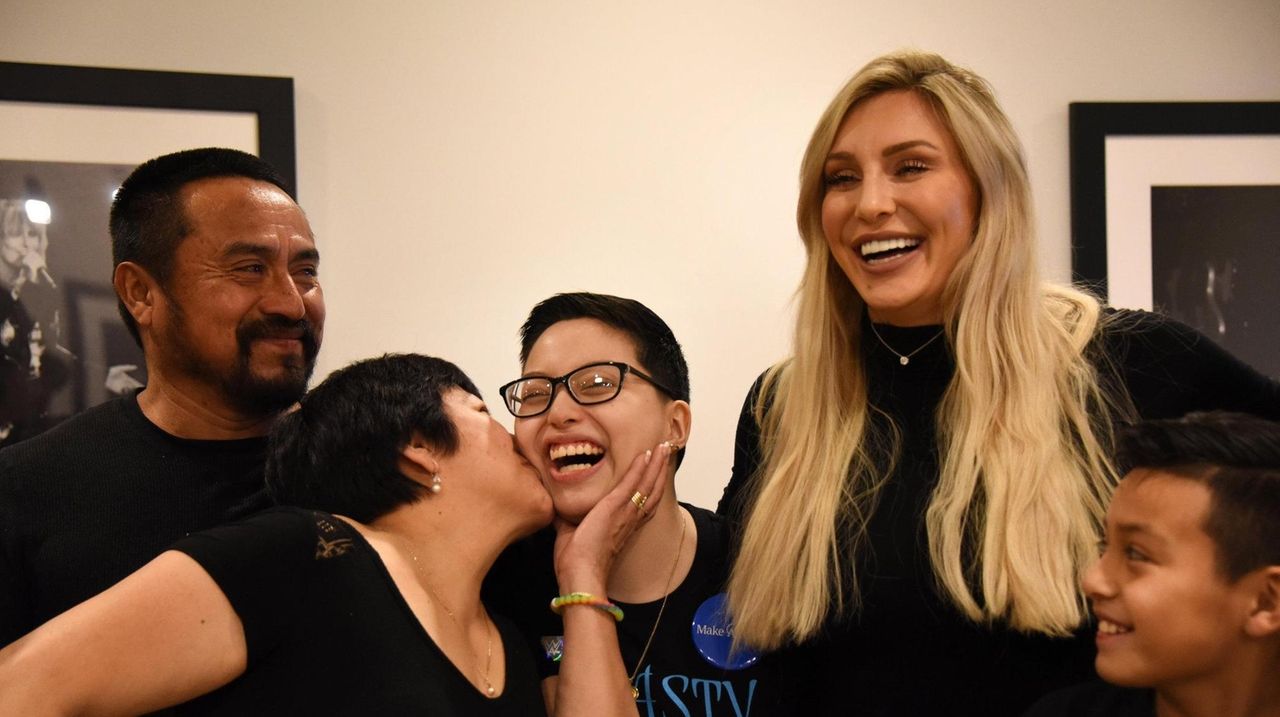 Diana Santillan, 16, of Ronkonkoma, met her wrestling idol Charlotte Flair an hour before the WWE Live Holiday Tour at NYCB Live's Nassau Coliseum thanks to the Make-a-Wish foundation and students at the teen's high school. The meeting was a dream come true for Diana, who suffers from leukemia. Credit: Danielle Silverman

But unlike most teens, Diana got to chat face-to-face Thursday with her idol — Charlotte Flair, one of World Wrestling Entertainment’s biggest stars.

“I never thought anything like this could really happen,” the Connetquot High School student said as she wore a Charlotte Flair T-shirt and sat with six members of her family, including her 10-year-old nephew David Sanchez, who is just as avid a fan. “She’s really, like, powerful. I really like her wrestling style.”

Just then, Charlotte Flair, who has been the WWE’s women’s champion several times since she entered the sport in 2012, walked into a private room of NYCB Live's Nassau Coliseum and Diana blushed and gasped with excitement, her eyes welling up with tears of happiness.

The long-desired meeting about an hour before the WWE Live Holiday Tour was a dream come true for Diana, who suffers from leukemia. The dialogue was made possible by the Make-A-Wish Foundation after a donation to the organization by Diana’s classmates, who raised $6,000 by selling Christmas ornaments.

It took all of 30 seconds for the two to wax nostalgic on all things Flair, from her best matches, her famous dad, Ric Flair — himself a 16-time World champion — Flair’s latest Twitter posts to how she got her catchy ring name. David was humble enough to admit that his aunt tends to use Flair’s signature submission move — a Figure 8 — to “finish him off” during equally epic matches at home.

Charlotte Flair signed a book, a T-shirt, an action figure, some glossy photos of herself for Diana and, of course, posed for selfies.

Flair was to enter the ring with Becky Lynch and Asuka — at the same time — and theirs was the top billed match in a lineup of wrestlers, including Daniel Bryan, Rey Mysterio and Randy Orton. Even John Cena was to make an appearance.

But the superstar wrestler said she was inspired “100 percent,“ to perform her best by her teenage admirer.

“That was exciting, but I was probably as nervous as she was,” Charlotte Flair said after the brief encounter. “That’s a big thing. I mean, she’s the one fighting the real-life battle. … Knowing what families go through when you have a child that’s sick, I can’t imagine. … She has to face every single day not knowing where life’s going to take her.”

Clearly humbled by the experience, and honored to meet Diana, the first person who has requested a meeting with Charlotte Flair through Make-A-Wish, the superstar said she hoped she was up to the task.

“I just want to make sure I hold up to her expectation,” she said. “I play a character and when I walk through that curtain, sometimes I don’t know how I transform to that person. So when you meet someone who admires you that much from afar you just want to be what they expect.”