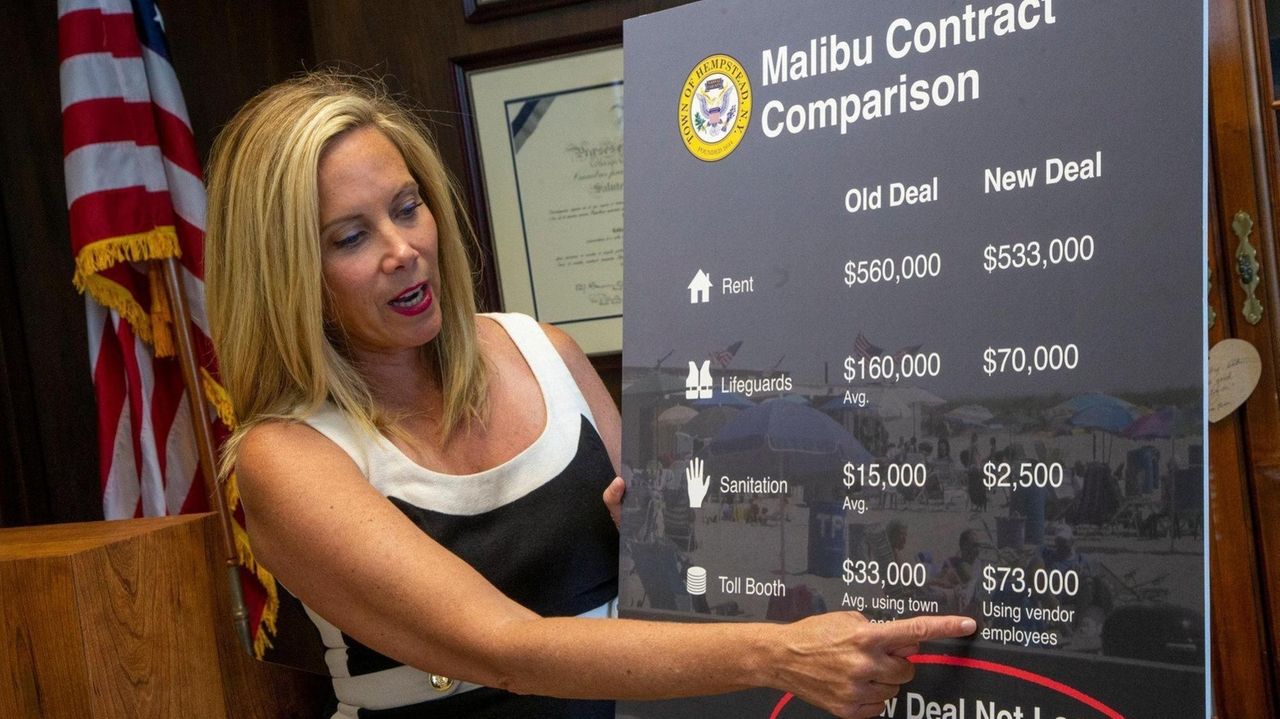 Hempstead Supervisor Laura Gillen on Tuesday decried an extension of a contract with the operator of the popular Malibu Beach Park as a secretly negotiated "sweetheart deal" that will bilk town taxpayers out of $169,000 annually. Credit: Howard Schnapp

Hempstead Supervisor Laura Gillen on Tuesday decried an extension of a contract with the operator of the popular Malibu Beach Park as a secretly negotiated "sweetheart deal" that will bilk town taxpayers out of $169,000 annually.

But Butch Yamali, chief executive of Dover Gourmet Corp., which operates the town-owned beachfront recreation facility, disputed Gillen's figures and accused the Democratic supervisor of misrepresenting the contract for political gain in her campaign for re-election.

The mutual denunciations come after Newsday reported last week that Yamali and Hempstead Town Parks Commissioner Daniel Lino in April signed the five-year contract extension that transferred responsibility for collecting parking fees at the Lido Beach complex from the town to Dover. The change came in the same year that the town doubled the fee for nonresidents to park at Hempstead beaches, including Malibu, from $25 to $50.

Lino did not respond to a request for comment.

Republican council members Erin King Sweeney and Bruce Blakeman said in a joint statement Friday that they were referring the contract extension to the town's compliance officer for review.

Gillen on Tuesday said Lino was not authorized to extend the contract without her approval. She also said the extension reduced Dover's payments to the town for rent, lifeguards and garbage collection by about $129,800. The extension also granted Dover a $72,800 parking credit for customers at the company's Maliblue Oyster Bar in exchange for Dover taking over the toll booths. Gillen said it had only cost the town $33,000 to staff the toll booths itself.

"The terms of this purported agreement are a complete rip off," Gillen said. "The brazen contempt for the town taxpayers is hard to believe."

Yamali said the original contract did authorize Lino to execute the extension. He said Gillen was distorting the town's costs to staff the lifeguard stands and toll booths, and Dover has not been required to pay Hempstead for garbage collection since 2009, as it moves its garbage to town trash dumpsters itself.

He said his Freeport-based company has invested millions in Malibu Beach Park since it began operating the aging facility in 2009. The club has hundreds of beach cabanas, a restaurant, pools, tennis courts and other amenities.

Malibu "went from being a broken-down place ready to close to a place where people can't wait to go to," he said. "They should be thanking me instead of trying to beat me up."

Gillen said she is seeking an independent appraisal of the contract's fair market value, and that her staff is investigating whether town officials involved in negotiating the contract extension should face disciplinary charges.