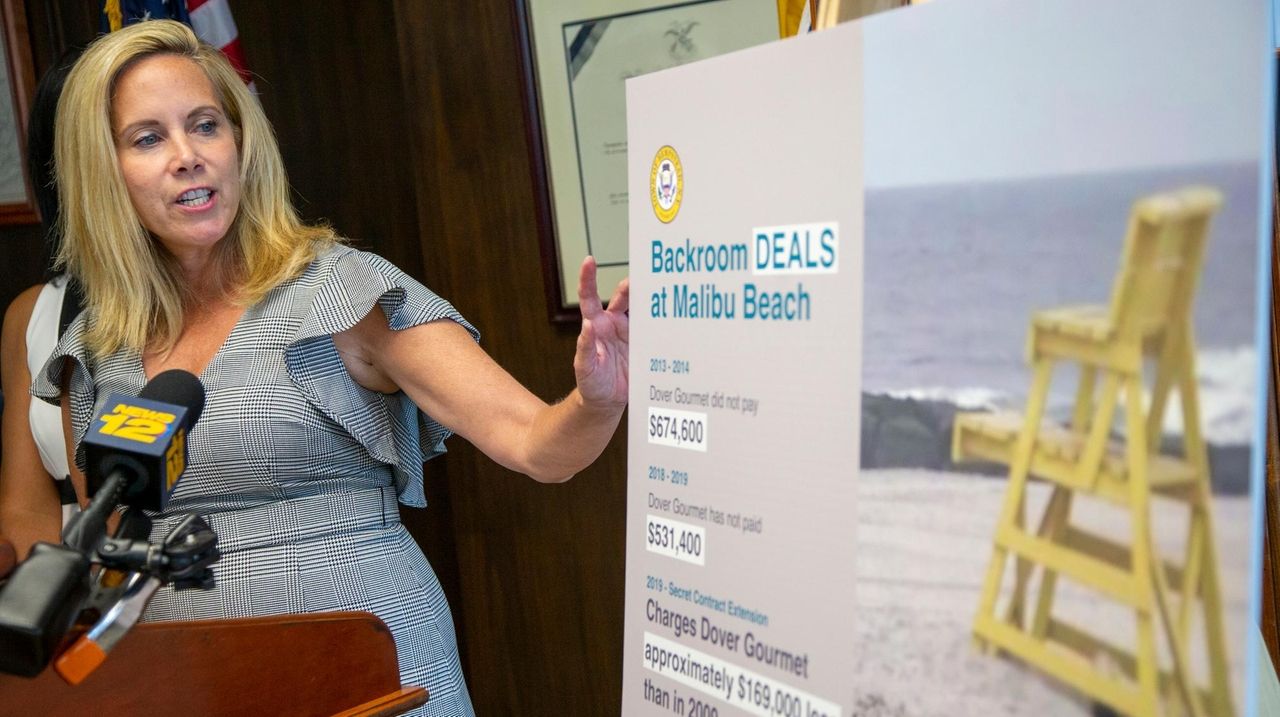 Hempstead Town Supervisor Laura Gillen on Wednesday said Daniel Lino "failed taxpayers" by not collecting rent from the operator of Malibu Beach Park, and called to investigate and annul the extension of the operator's contract. Credit: Howard Schnapp

Hempstead Town Supervisor Laura Gillen on Wednesday demanded the resignation of her parks commissioner over his role in what Gillen has called a secretly negotiated "sweetheart deal" for the operator of the town's popular Malibu Beach Park.

Gillen also called on the town board at its meeting Tuesday to annul an extension of Hempstead's contract with the operator, Freeport-based Dover Gourmet Corp., and to hire outside counsel to investigate the agreement.

Dover chief executive Butch Yamali, who has run the Lido Beach complex since 2009, countered that Gillen was sensationalizing the contract to bolster her re-election campaign and said he plans to sue the supervisor for defamation.

The escalating conflict follows a Newsday report on town records showing that Dover has not paid Hempstead rent on the beachside recreation facility for nearly a year, accumulating a balance of $531,400.

Yamali said he has not paid the rent because the town owes him more than $2 million for capital improvements he has carried out at the park, which features beachfront cabanas, tennis courts, a restaurant and other amenities.

At a news conference Wednesday, Gillen said Parks Commissioner Daniel Lino has "failed the taxpayers" by not collecting Yamali's rent and negotiating "verbal side deals" that "gifted millions of dollars to a favored vendor."

Lino did not respond to a question Wednesday about whether he will resign.

The Malibu contract, for which Dover is to pay Hempstead $560,300 in rent this year, states the company would perform up to $10 million in capital improvements. Yamali said he has spent more than $12 million. The contract does not say the town will cover improvement costs beyond $10 million. But Yamali said town officials agreed to do so verbally and instructed him not to make the rental payments until the two sides came to terms regarding his improvement costs.

Yamali called Gillen's statements a "shameless political attack" and said "the supervisor is desperately playing politics for her failing campaign."

Gillen, a first-term Democrat, is running for re-election in November.

Yamali noted that he received an email from Gillen's campaign Tuesday evening that cited Newsday's story on his nonpayment of rent and requested campaign contributions.

Yamali said he donated $100 to her campaign on Wednesday.

A Gillen campaign spokesman said the campaign is voiding the contribution.

None of the other town board members joined Gillen in demanding Lino's resignation.

Yamali said he is up to date on payments with his other government contracts.