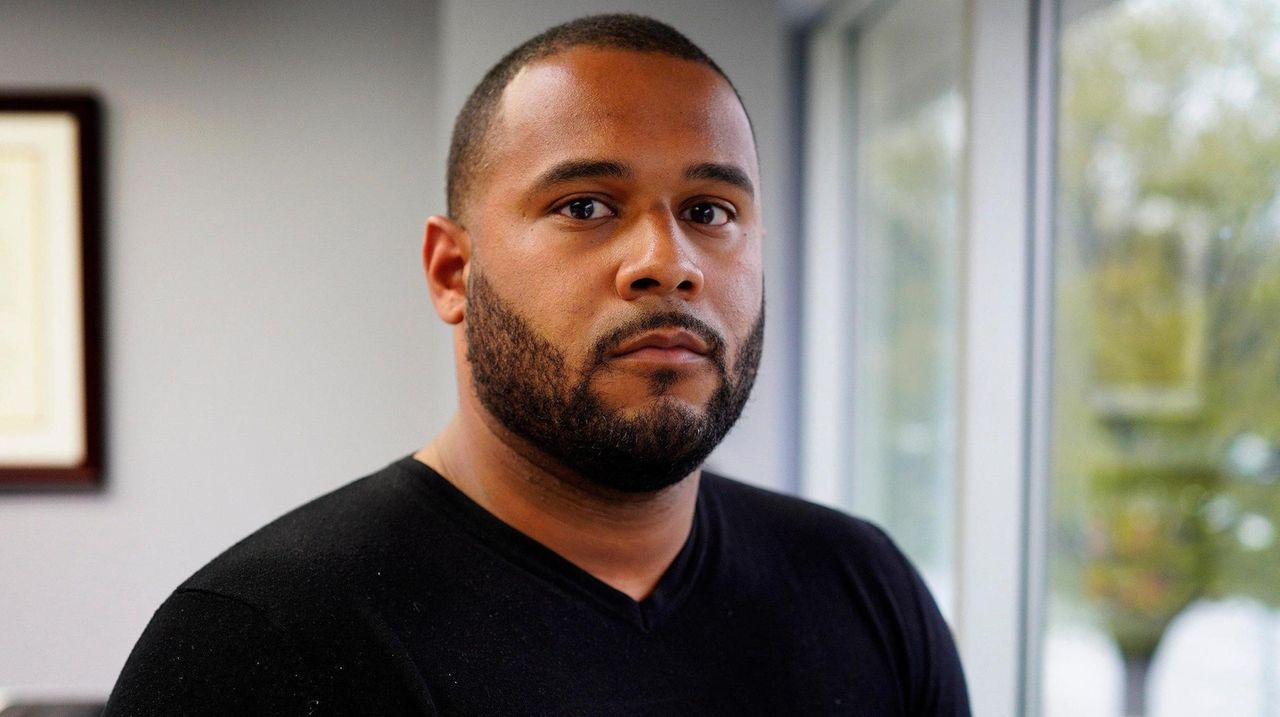 Franklin Feliz, a former employee of the village of Malverne, is suing the village, accusing colleagues of making racist remarks, hanging a noose and spitting in his water. Credit: Howard Schnapp

A former Malverne public works employee endured a decade of racial bigotry and harassment from his white co-workers who called him racial epithets, spit in his drinking water and hung a noose in the locker room, according to allegations made in a new civil rights lawsuit.

The suit was filed Tuesday in state Supreme Court in Mineola by Franklin Feliz, 31, who says he was the department's lone minority employee, against the Village of Malverne and then-public works Superintendent Paul Jessup. Feliz, who worked for the highways department and assisted sanitation crews, is Black and Hispanic.

Feliz, who resigned in 2019 and now works in sales, said he still suffers from anxiety, depression and sleeps less than four hours a night.

"It's something that broke me as a man," Feliz said Thursday in Garden City. "It broke me tremendously. I stress eat. I am stressed … 95% of the day because of everything that's happened to me in the past 10 years. I keep it as a rewind in my mind. I try to look forward but it still plays like a video in my mind of everything I've gone through."

When he complained to supervisors and his union representatives about the treatment, Feliz said he was told: "this is not a day care or a school" and "they're not here to babysit us."

Feliz and his attorney, Jonathan Bell, first filed a discrimination and harassment suit against Malverne in February 2020. The original case, which included only a fraction of the most serious allegations made in the most recent complaint, expanded after Feliz recalled details about his alleged treatment during conversations with his attorneys, Bell said.

"This is one of the most severe cases of racial discrimination I've ever handled or seen," Bell said. "The terms and conditions of his employment were deplorable."

The suit asks for unspecified damages and calls for the village to implement racial training programs.

Village Mayor Keith Corbett said Malverne has not been served with the complaint and is not in possession of the official lawsuit.

But Corbett, responding to Feliz's interview with Newsday, said in a statement: "the salacious allegations appear to be nothing more than an attempt to take advantage of this important moment in our country’s history, as a means to leverage financial gain. This individual commenced a suit two years ago for the same relief and did not raise these allegations. The village administration would never condone this type of conduct."

Feliz said the alleged abuse began after he was hired in 2009 when co-workers began calling him their "Mexican." The suit says the epithets escalated and Feliz said he was repeatedly called the N-word, "freeloader" and "deadbeat dad."

The suit includes a litany of other derogatory slurs and racial stereotypes allegedly directed at Feliz, from calling him a member of the MS-13 gang and telling the father of two he doesn't belong in the country to suggesting his father was a drug dealer. Multiple comments, Feliz said, referenced the Ku Klux Klan, which had a presence in Malverne in the 1920s.

"This was totally new to me," said Feliz, who grew up in Brooklyn and moved to Long Island when he was 16. "It caught me by surprise."

Despite the harassment, Feliz says he refused to resign, as his $70,000 salary was needed to pay down his student loans.

The harassment escalated beyond ethnic slurs, he said. Early in his tenure, Feliz said a rope was tied in a noose in the department's locker room.

Jessup would frequently make an example of Feliz, the suit said.

In one instance, Feliz says he was summoned to remove a tree branch from Ocean Avenue and was told in front of other employees, "you got to do things the white way." Jessup, who no longer works for the village, did not respond to requests for comment.

In 2015, a co-worker spit in Feliz's water cup in front of him and called him an expletive and the N-word, the suit said. Feliz said he reported the incident to Jessup but no action was taken.

"They knew they weren't going to get in trouble because it's a small town," Feliz said. "Everyone knows everyone."

In November 2018, Feliz took a three-month leave of absence, accepting a $45,000 pay cut at a different job, and then permanently resigned in March 2019, according to the suit.

During an exit meeting with Corbett and then-Mayor Patti McDonald, Feliz said, he was told a full investigation would be conducted. It is unclear if an investigation was conducted and Feliz said he was never contacted again.

McDonald, who left office in April 2019, said she was unaware of the details of the suit but was "blindsided" by the allegations. "We would take these issues very seriously," McDonald said.

More than two years after leaving his job, Feliz said he continues to fear retaliation but wants to ensure no other employee ever faces similar abuse.

"I don't want someone else to go through what I've gone through," he said, "in an incorporated village where they just keep sweeping things underneath the rug."

Forecast: Rain Monday gives way to cool, drier week ahead
1:14
COVID-19 restrictions continue to loosen, as leaders work to reach vaccine holdouts
2:07
Parents conflicted over whether to get kids 12 to 15 inoculated
0:23
River otters returning to Long Island but they face danger
1:41
200 mph train from NYC to Long Island to Boston proposed
Oyster Bay begins formulating management plan for town harbors and bays
Didn’t find what you were looking for?