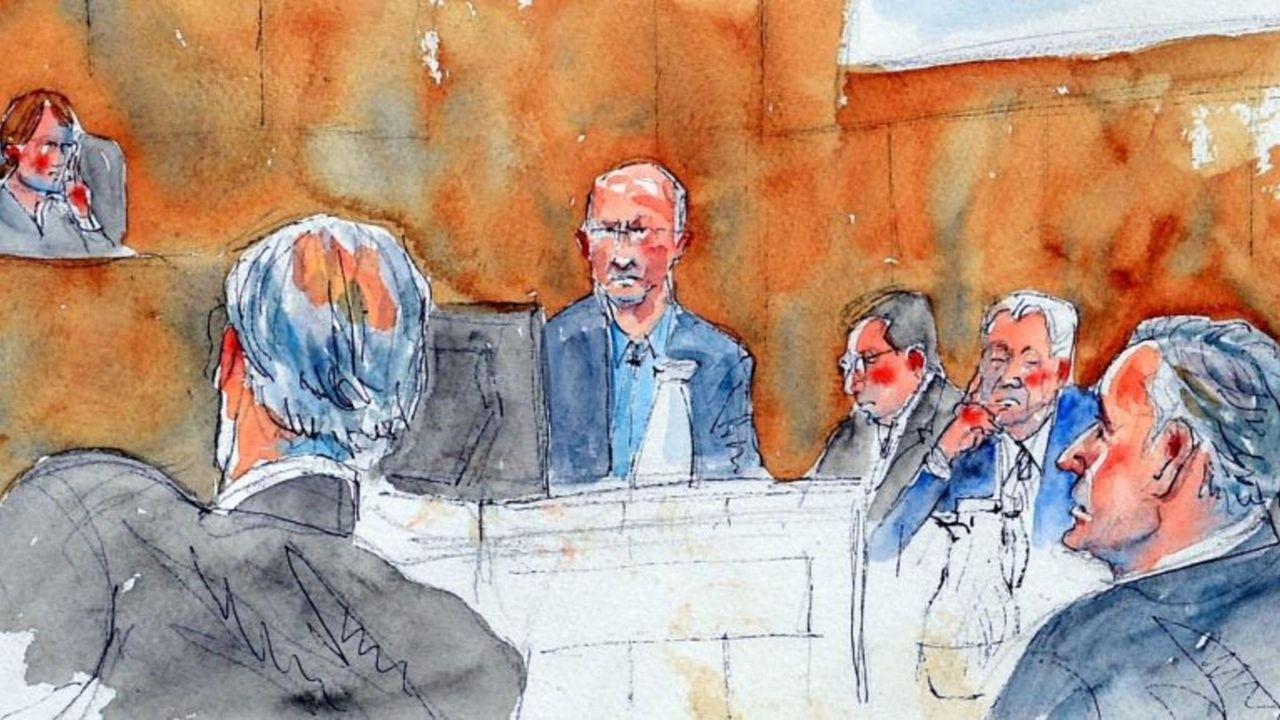 An attorney who served as outside counsel to the Town of Oyster Bay when it first guaranteed a loan for restaurateur Harendra Singh testified Wednesday that he witnessed Nassau County Executive Edward Mangano put his hand on Singh's shoulder at a crucial April 2010 meeting on the deal and tell the room, "Let's get this thing done." Credit: News 12 Long Island

This story was reported by Nicole Fuller, Robert E. Kessler, Bridget Murphy and Emily Ngo. It was written by Ngo.

An attorney who served as outside counsel to the Town of Oyster Bay when it first guaranteed a loan for restaurateur Harendra Singh testified Wednesday that he witnessed Nassau County Executive Edward Mangano put his hand on Singh’s shoulder at a crucial April 2010 meeting on the deal and tell the room, “Let’s get this thing done.”

Jonathan Sinnreich — on the stand at the federal corruption trial of Mangano and former Oyster Bay Town Supervisor John Venditto — said that he had warned town officials repeatedly against what he believed to be a “grossly illegal and inappropriate” plan.

There, Mangano expressed to an audience that included attorneys for the town and from Rivkin Radler LLP his desire for a solution to permit Singh to get funding, Sinnreich said.

“Obviously . . . he was there to encourage and support the deal,” Sinnreich said, clarifying: “The deal that would provide bank financing to Mr. Singh.”

Previous witnesses have testified that Mangano did not speak at the meeting.

On Wednesday, Sinnreich testified: “Both Mr. Venditto and Mr. Mangano tasked us generally . . . but particularly Rivkin Radler to try to come up with a solution. And that’s how it was left.”

Singh ultimately secured a $1.5 million line of credit with an opinion letter from then-Deputy Town Attorney Frederick Mei and legal documents from Rivkin Radler, the Uniondale law firm where Mangano practiced before he became county executive.

Town-guaranteed loans for Singh totaling about $20 million over the years are at the center of federal prosecutors’ bribery case against Mangano and Venditto, whose Central Islip trial was in its sixth week.

Mangano’s wife, Linda, 54, of Bethpage, also standing trial, is charged with conspiracy to obstruct justice, obstruction of justice and making false statements to the FBI.

Singh testified to bribing Edward Mangano and Venditto with perks that included free meals, free vacations for the Mangano family, free limousine services for Venditto, his family, his aides and their guests and a no-show job for Linda Mangano that paid $450,000 over four and a half years.

Singh said that he received, in exchange, county contracts and the town-guaranteed loans.

Sinnreich warns of “constitutional concerns” in a March 10, 2010 email to Mei.

Sinnreich cites a part of the state Constitution that “prohibits the gift of municipal credit in aid of any individual or public or private corporation.”

Sinnreich writes in an April 25, 2010 email to Mei and then-Town Attorney Leonard Genova: “The town remains on the hook if the money is misspent. It remains my personal view that the Town should not accept that risk.”

Rivkin Radler partner William Cornachio testified one week ago that the “Constitution does not prohibit a municipality from providing some security to a private person.”

Cornachio said he believed that was different from lending its creditworthiness to a person or business.

Rivkin Radler and its attorneys are not accused of wrongdoing.

Genova, who has immunity in a related U.S. Securities and Exchange Commission fraud case, is expected to testify later in the trial.

Sinnreich, 71, of Mount Sinai, said Wednesday that he perceived Mei to be “very invested in having this job done,” referring to the guarantee for Singh.

“But I couldn’t do it in this case because it was grossly illegal and inappropriate,” Sinnreich said.

Earlier Wednesday, Mei wrapped up his three days of testimony by admitting to jurors that he is “terrified” at the prospect of prison.

Mei, 58, of Bayville, is cooperating with prosecutors after pleading guilty to accepting bribes from Singh, including $50,000 in checks made out to cash, a trip to South Korea and cash payments to cover a $36,000 BMW lease.

He faced questioning by Venditto’s attorney, Marc Agnifilo of Manhattan, who sought to demonstrate how desperate Mei was to avoid incarceration.

“Tell the jury how terrified you are of prison,” Agnifilo instructed Mei.

“Equally terrified,” Mei said, comparing the possibility with how he had felt during an internal Oyster Bay investigation on Singh’s business relationship with the town.

But Mei added: “The specter of prison for me is in the future . . . I’m not thinking about it right now.”

The former town official said, “I’m going to tell the truth and get past this.”

Mei has testified that he helped to facilitate loans for Singh, his one-time friend, but said the direction to do so came from Venditto, beginning with the first $1.5 million line of credit in 2010 from Madison National Bank.

But Mei acknowledged in response to Agnifilo’s questions that he never told the town supervisor about helping Singh to later acquire two loans from Westchester County-based NDH Capital, about hiring the Democrat-connected Harris Beach law firm to represent the town at the request of Singh, about taking various bribes from Singh or about forging Venditto’s signature on a legal document.

Mei also said it was Venditto’s idea — not his — to help Singh’s business by using the town’s creditworthiness.

Responding to Assistant U.S. Attorney Lara Treinis Gatz’s questions, Mei agreed it wasn’t customary for Mangano, and Rob Walker, then Mangano’s chief deputy, to be present for a discussion such as that on April 28, 2010 at Venditto’s campaign headquarters on the town guaranteeing loans for Singh.

The matter had nothing to do with Nassau County, Mei said.

Walker in February pleaded not guilty in a separate case to federal charges of obstructing justice and lying to FBI agents.

CORRECTION: Restaurateur Harendra Singh secured a $1.5 million line of credit in 2010 with an opinion letter from then-Oyster Bay Deputy Town Attorney Frederick Mei and legal documents drawn up by Rivkin Radler LLP of Uniondale, according to testimony in the federal corruption trial of former Nassau County Edward Mangano and former Oyster Bay Town Supervisor John Venditto. A previous version of this story misstated the author of the opinion letter.