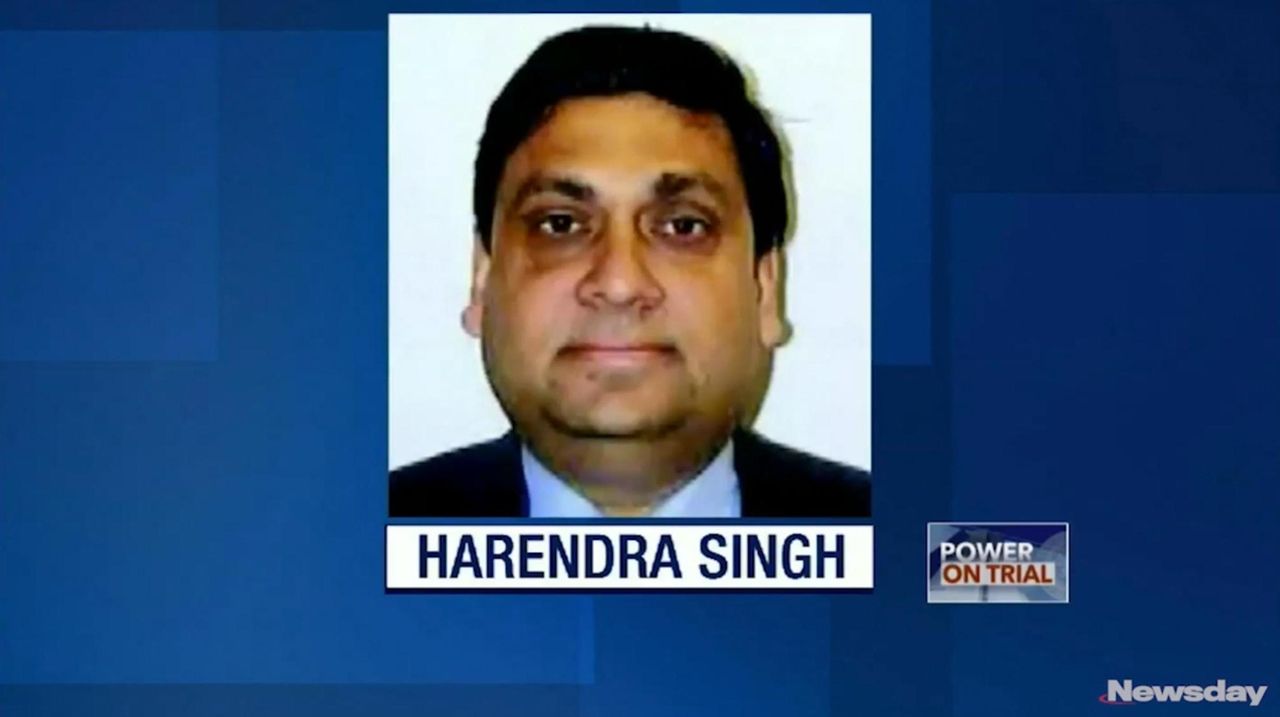 Newsday columnist Joye Brown sat down with News 12 Long Island to discuss the Edward Mangano federal corruption trial. The former Nassau County executive's defense attorney on Monday wrapped up his cross-examination of restaurateur Harendra Singh, the prosecution's star witness, by seeking to paint a portrait of a man acting to save his own neck. Credit: News 12 Long Island

Restaurateur Harendra Singh said Monday at the federal corruption trial of former Nassau County Executive Edward Mangano that he was “in denial” when he insisted in a secretly recorded June 2015 conversation that he hadn’t done anything wrong and that he, at that point, “was trying to hide” his dealings with politicians.

Singh was responding to questions from a defense attorney representing Mangano’s wife, Linda, about a tape — played Thursday for jurors — in which Singh appears to contradict his testimony on bribing Mangano in exchange for help with his businesses.

In the phone call wiretapped without Singh’s knowledge, Singh tells a friend, retired Nassau police Det. Roger Paganuzzi, that he doesn’t “have any story about any politician” and anything he could tell investigators would be “all lies.”

Singh sought to explain Monday: “Everybody is in denial when they do something wrong and I was in denial.”

He said of Paganuzzi: “I was lying to him at that time.”

Singh said that he “was trying to hide people who I was doing business with” and added later that he “didn’t want to share with Paganuzzi what I was doing with the politicians.”

Singh sought to reject the tape’s implications in his 11th day on the stand in Central Islip.

Her defense attorney, John Carman of Garden City, sought to establish that Singh was being truthful when he told Paganuzzi in June 2015 that he wasn’t impeding a government probe.

Carman questioned Singh’s earlier testimony saying he met in May 2015 with the Manganos to sync up stories on Linda Mangano’s no-show job.

But Singh responded that he indeed had done something wrong but was lying to both himself and Paganuzzi.

Edward Mangano, 56, of Bethpage, and Venditto, 68, of North Massapequa, have pleaded not guilty to charges that include conspiracy to commit federal program bribery and honest-services fraud. Mangano faces an additional charge of extortion and Venditto also is charged with securities fraud.

They are standing trial with Linda Mangano, 54, of Bethpage, whose charges include obstruction of justice and making false statements to a federal agent. She has pleaded not guilty.

Carman suggested Singh’s motivation for giving Linda Mangano the no-show job had more to do with their very close friendship than with any alleged bribing of her husband.

Singh said she had a desk at his office in the basement of his H.R. Singletons restaurant in Bethpage, but after she saw it on the day she was hired in April 2010, she never used it.

Singh said he never discussed marketing, graphics, logos, advertising or anything at all with her, because there was no expectation that she would do any work for him.

Under Carman’s questioning, Singh acknowledged that he visited the Manganos at their home three or four times a week after Edward Mangano took office in 2010.

In text messages presented by Carman as evidence, Linda Mangano often refers to Singh as “my love.”

In Thanksgiving 2014, she texts: “I am so thankful for your friendship. You are the closest thing I will have to a brother.”

Singh replies: “My friend, you are making me cry. We love you all.”

Singh acknowledged from the stand, of the Manganos: “They were very good friends. I think we both were sincere.”

Carman asked if Linda Mangano joked with Singh in front of her husband: “You should kill Ed and run away with me.”

“That was Linda’s joke, not me,” Singh said.

Singh’s back-and-forth with Carman had some tense moments.

Singh, who is diabetic, told Carman at one point: “I’m not too good today. I’m very low blood sugar.”

When Carman asked Singh if he believed his previous attorney failed him in dissuading him from taking a plea deal earlier, Singh replied: “Are you a mind reader now?”

Then, when Carman asked Singh if he told his one-time friend, Linda Mangano, that his wife, Ruby, was ruining his life, Singh shot back: “No, it’s a lie.”

Earlier Monday, Edward Mangano’s defense attorney finished his cross-examination of Singh, continuing to seek to discredit Singh as a government witness, painting for jurors a portrait of a man who would lie to save himself.

Keating also sought to distance his client from Singh’s criminal activity, noting that the charges against Singh in his first, September 2015 indictment — including tax and payroll fraud — had nothing to do with Mangano.

Keating asked if Singh would get “significant benefits” from a letter prosecutors could write to the judge who sentences him.

Keating emphasized in his questioning that many of Singh’s claims against Mangano rely largely on Singh’s word.

Singh, for example, said he bought a pricey office chair for Mangano after Mangano gave him a printout of the chair he wanted.

“There’s no audio tape or video of that happening,” Keating said. “It’s your claim that happened, right?”

Singh conceded that was the case.

Singh also agreed there was no audio or video of other favors he has said that Mangano did for him in return for gifts he has described as bribes.

When Singh was arraigned in September 2015, he was released with a substantial bond. One of the properties securing the bond was owned by his parents. Singh acknowledged he had taken out a fraudulent $4.3 million loan on that property without his parents’ knowledge.

A condition of the bond was that he commit no further crimes. But in December 2015, Singh was jailed after federal authorities accused him of trying to arrange another fraudulent loan — this one based on a fake property invoice he said he created in his kitchen.

“It was wrong of me to do that,” Singh said Monday. “It was an act of desperation.”

“When you’re desperate, Mr. Singh, you think of yourself, don’t you?” Keating asked.

“Everybody does,” Singh said.