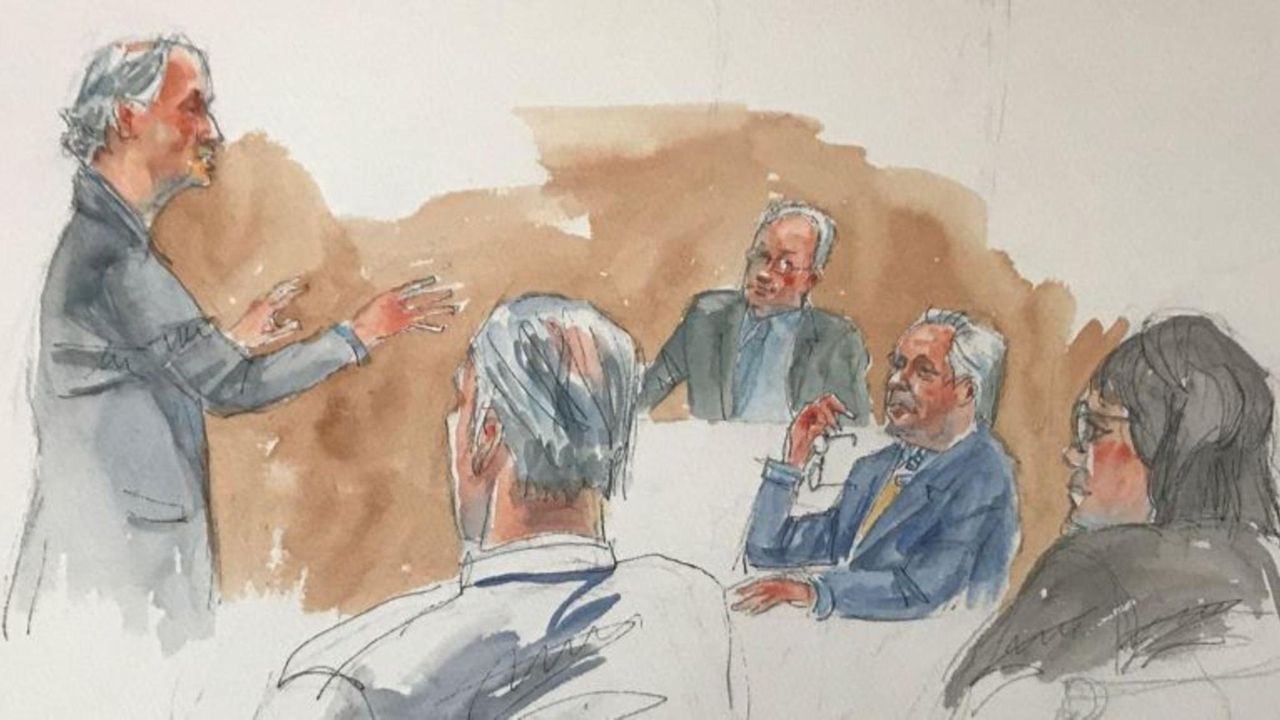 An attorney who served as outside counsel to the Town of Oyster Bay testified Thursday that he vehemently urged its officials against what he saw as a "sham" and "bogus" proposal to guarantee a loan for restaurateur Harendra Singh. Jonathan Sinnreich also said he believed town leaders were "highly solicitous" of Singh, citing a 2005 meeting on a concessionaire agreement for Singh that was held before requests for proposals were put out. After the day's testimony, Newsday's Joye Brown appeared on News 12 Long Island to discuss Thursday's developments. Credit: News 12 Long Island

This story was reported by Nicole Fuller, Robert E. Kessler, Bridget Murphy and Emily Ngo. It was written by Ngo.

An attorney who served as outside counsel to the Town of Oyster Bay testified Thursday that he vehemently urged its officials against what he saw as a “sham” and “bogus” proposal to guarantee a loan for restaurateur Harendra Singh.

Jonathan Sinnreich also said he believed town leaders were “highly solicitous” of Singh, citing a 2005 meeting on a concessionaire agreement for Singh that was held before requests for proposals were put out.

The bulk of his testimony focused on events in 2010 when Rivkin Radler LLP, the Uniondale law firm where Mangano once practiced, drew up the legal documents to help Oyster Bay guarantee a $1.5 million line of credit for Singh.

Rivkin Radler partner William Cornachio testified one week ago to writing the documents.

Sinnreich said he opposed Cornachio’s plan and expressed so to Leonard Genova and Frederick Mei, then the town’s attorney and deputy attorney.

“I told Fred it was a sham and it couldn’t survive judicial scrutiny,” Sinnreich said.

“As I told Mr. Mei and Mr. Genova, I thought that was a bogus, pre-texual document,” he added later.

Town-guaranteed loans for Singh that totaled about $20 million over the years are at the center of prosecutors’ bribery case against Mangano and Venditto.

Singh has testified that he provided perks to the officials, including free meals, free vacations for Mangano, free limousine services for Venditto and a no-show job that paid a total $450,000 for Mangano’s wife, Linda, in exchange for county contracts and the town-guaranteed loans.

The charges against Mangano, 56, of Bethpage, and Venditto, 68, of North Massapequa, include conspiracy to commit federal program bribery and honest-services wire fraud.

Mangano, who first took office as county executive in January of 2010, also is charged with extortion.

Linda Mangano, 54, of Bethpage, also standing trial in Central Islip, is charged with conspiracy to obstruct justice, obstruction of justice and making false statements to the FBI.

Mei, who pleaded guilty to taking bribes from Singh, also has testified in the trial.

Genova, who has immunity, is expected to testify later in the trial.

Rivkin Radler attorneys have not been charged with wrongdoing.

Sinnreich agreed that though he didn’t know then that Mei was taking bribes from Singh, “I always experienced Mr. Mei as very solicitous of Mr. Singh’s interests.”

He then told Assistant U.S. Attorney Catherine Mirabile of the 2005 meeting at H.R. Singletons, Singh’s Bethpage restaurant, where officials discussed a concessions deal for Singh: “The whole purpose of the meeting was highly solicitous of Mr. Singh’s interests.”

He agreed with Mirabile that Mei did not appear to be working independently on behalf of Singh’s interests.

Asked if Mei was a “rogue attorney,” Sinnreich said: “Absolutely not.”

Asked if Genova was a “rogue employee,” Sinnreich answered: “I always experienced Mr. Genova as working in concert with Mr. Venditto.”

Sinnreich on Wednesday had detailed the scene at the crucial April 28, 2010, meeting where Singh, Mangano, Venditto, Genova, Mei and Rivkin Radler attorneys discussed finding a way to get Singh a town-guaranteed loan.

He had said Mangano put his hand on Singh’s shoulder and told the room, “Let’s get this thing done.”

Mangano’s attorney, Kevin Keating of Garden City, challenged the witness Thursday on some of the details and how he has recounted them in the past.

Sinnreich acknowledged that he likely didn’t tell a grand jury in July 2016 that Mangano placed his hand on Singh’s shoulder.

“I don’t think so, but I wasn’t asked a specific question that would elicit that testimony,” Sinnreich said.

Sinnreich also acknowledged that he had no recollection when he first spoke to the government in 2015 of Mangano being present there at the meeting.

He agreed it seemed accurate “in sum and substance” that he had told the government that Mangano had arrived probably one-third of the way through it.

Also Thursday, Lisa Graham, who worked for Singh from May 2007 to May 2010, testified that she did marketing work for his restaurants but never saw Linda Mangano or worked with her. Mangano’s first paycheck came in April 2010; her last in August 2014.

Assistant U.S. Attorney Raymond Tierney presented two large binders packed with the emails from and to Graham during the three years she worked for Singh.

He sought to contrast them with the 40 emails that Linda Mangano’s defense attorney, John Carman of Garden City, submitted earlier in the trial as proof of her marketing work for Singh in her 4 1⁄2 years of employment.

When Tierney asked to introduce the emails as evidence, Carman quipped: “No objection, as long as she doesn’t read them, judge.”

Another witness Thursday was Michael Landesberg, a “multi-unit” general manager for Singh’s restaurants between 2010 and 2014.

He said the company had marketing meetings at least once a week and he never saw Linda Mangano at any of them.

Landesberg also testified that the “H comp” button on the restaurants’ point-of-sale computer system was used to record free meals for Singh’s friends in government. Those who ate for free included Edward and Linda Mangano, Genova, Mei, Venditto, Thomas Krumpter — then Nassau County’s acting police commissioner — and Frank Nocerino, who was the Town of Oyster Bay’s parks commissioner.

The trial is scheduled to kick off its seventh week Monday in Central Islip.