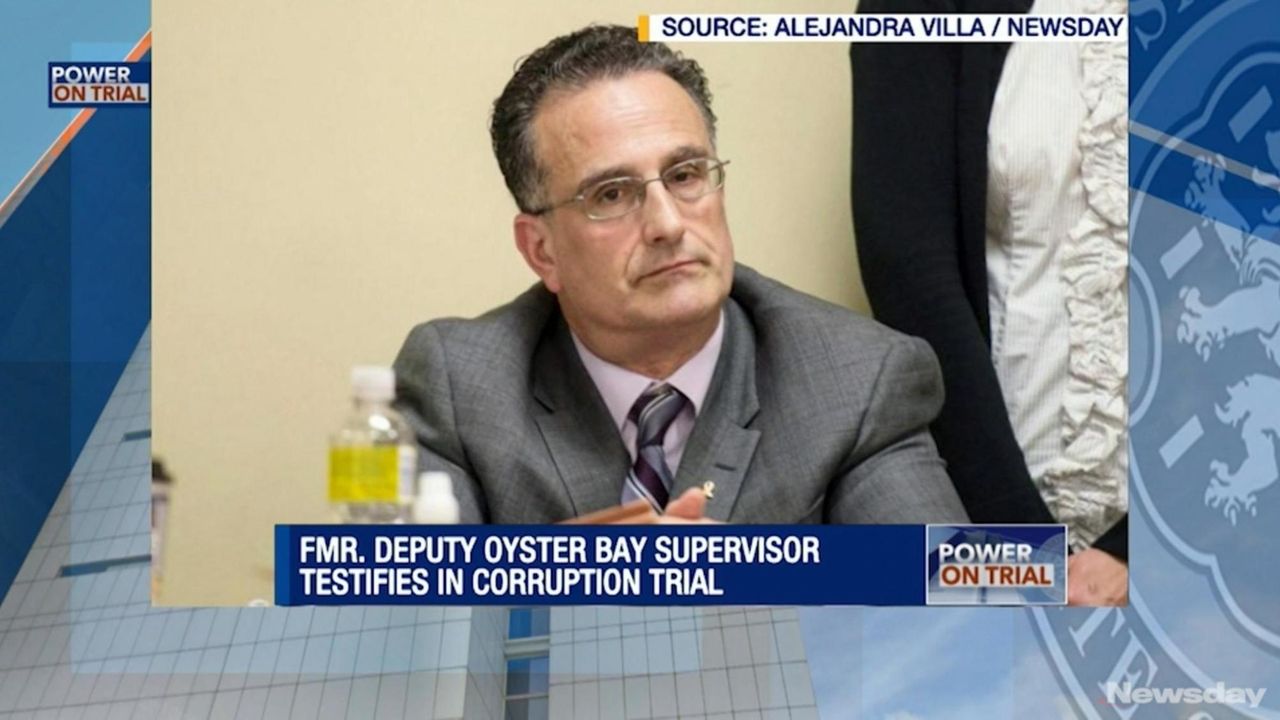 The former Oyster Bay official who once served alongside town supervisor John Venditto as his No. 2 testified Monday that Venditto was the force behind town concessions contracts and town-guaranteed loans for Harendra Singh.

Leonard Genova, who was deputy town supervisor, said both Venditto and former Nassau County Executive Edward Mangano had the restaurateur’s back at the crucial April 28, 2010 meeting that paved the way for Singh’s first loan backed by Oyster Bay’s creditworthiness.

“It’s rare in the world of politics to have two people of that stature in the room with professionals,” Genova said, adding of Mangano: “His presence alone spoke volumes.”

Genova recounted Venditto saying at the meeting: “Mr. Singh’s a good friend, and we’re here to help him.”

Mangano, according to Genova, told the attendees: “We have some bright lawyers in this room. Let’s see what we can do.”

Genova, who also was the town attorney, received immunity from prosecutors in return for his testimony. He took the stand Monday in the eighth week of Mangano and Venditto’s federal corruption trial in Central Islip.

He described the lengths to which officials went to help Singh secure financing and detailed the panic that gripped him, his colleagues and Singh when the avalanche of federal subpoenas and raids began in 2014.

Defense attorneys, including Marc Agnifilo of Manhattan, who represents Venditto, have sought to distance their clients from Singh’s admitted crimes. But Genova’s testimony painted the one-time elected officials as key players.

Singh testified that he bribed Mangano and Venditto in exchange for hundreds of thousands of dollars in county contracts and more than $20 million in town-guaranteed loans.

The charges against Mangano, 56, of Bethpage, and Venditto, 68, of North Massapequa, include conspiracy to commit federal program bribery and honest-services wire fraud, extortion for Mangano and securities fraud for Venditto.

The charges against Mangano’s wife, Linda, 54, of Bethpage, are conspiracy to obstruct justice, obstruction of justice and making false statements to the FBI.

Harendra Singh, 59, of Laurel Hollow, testified that he gave Mangano, among other perks, free meals, free vacations and a no-show job for Linda Mangano that paid a total of $450,000.

Singh said Venditto received free meals and limousine services for himself, his friends and his family members. Singh also testified that Genova benefitted from the limo rides.

“That’s what he had to say to get his immunity,” Agnifilo said.

“Half of what he said today, he never said to anyone before,” Agnifilo said. “It’s all false.”

Genova, 54, of Massapequa Park, testified that between 2010 and 2015, when Oyster Bay floated bonds to pay for various town expenses, he and Venditto purposely didn’t disclose that the town had guaranteed loans for Singh in a series of required financial documents.

A May 2015 statement on the town’s financial condition did not disclose the Singh loan guarantees, even though by that time the town had already hired Quinn Emanuel Urquhart & Sullivan LLP of Manhattan in connection with any civil liability for the loan guarantees, Genova said.

And in a July 2015 bond offering, the information also was left out, Genova said.

Asked if it was “purposely misleading,” Genova answered: “Yes.”

Asked who made the decision not to disclose it, Genova said: “Supervisor Venditto and myself.”

“I think that Mr. Singh really understood and was cognizant of all the people he was dealing with,” Genova said. “It’s not really about Len Genova anymore. It’s about Ed Mangano and John Venditto.”

The approval for the initial deal “emanated” from Venditto and wouldn’t have gone forward “without the supervisor’s knowledge and direction,” Genova said.

Venditto’s readiness to help out Singh also was apparent when the restaurateur sought a town-guaranteed line of credit in 2010, Genova said.

“H is having some issues,” Venditto said, according to Genova. “See what you can do to help him out.”

Eventually, Venditto told Genova that Mangano wanted them to meet at Venditto’s political headquarters in North Massapequa with the lawyers from Rivkin Radler LLP, Genova said.

Mangano had worked previously at the Uniondale law firm.

“I don’t think I was ever at a meeting like that before, or since,” Genova said.

“That’s where the intertwining of government and politics makes it difficult,” Genova said. “It was no longer a question of if we were doing it. It was a question of whether the Rivkin Radler firm could find a solution.”

Genova, who resigned in January 2017, also detailed his close working and personal relationship with Venditto.

The witness called Venditto “a mentor” and “an older brother.” He commended him as “very intellectual” and said he understood “every problem from every perspective.”

Genova testified that he and Venditto were “inseparable” and “talked virtually every day” via phone — sometimes seven times daily — and in person.

Email, however, was off-limits, Genova indicated.

“Nothing good could come of putting in things in email and the record you created,” he said.

Genova later said he and Venditto discussed the perks they got from Singh.

“We talked at great length about the bribes . . . the car service, I recall, the free meals,” Genova said.

Genova said of his former boss: “He didn’t necessarily think it wasn’t a big deal because he didn’t take cash, per se.”