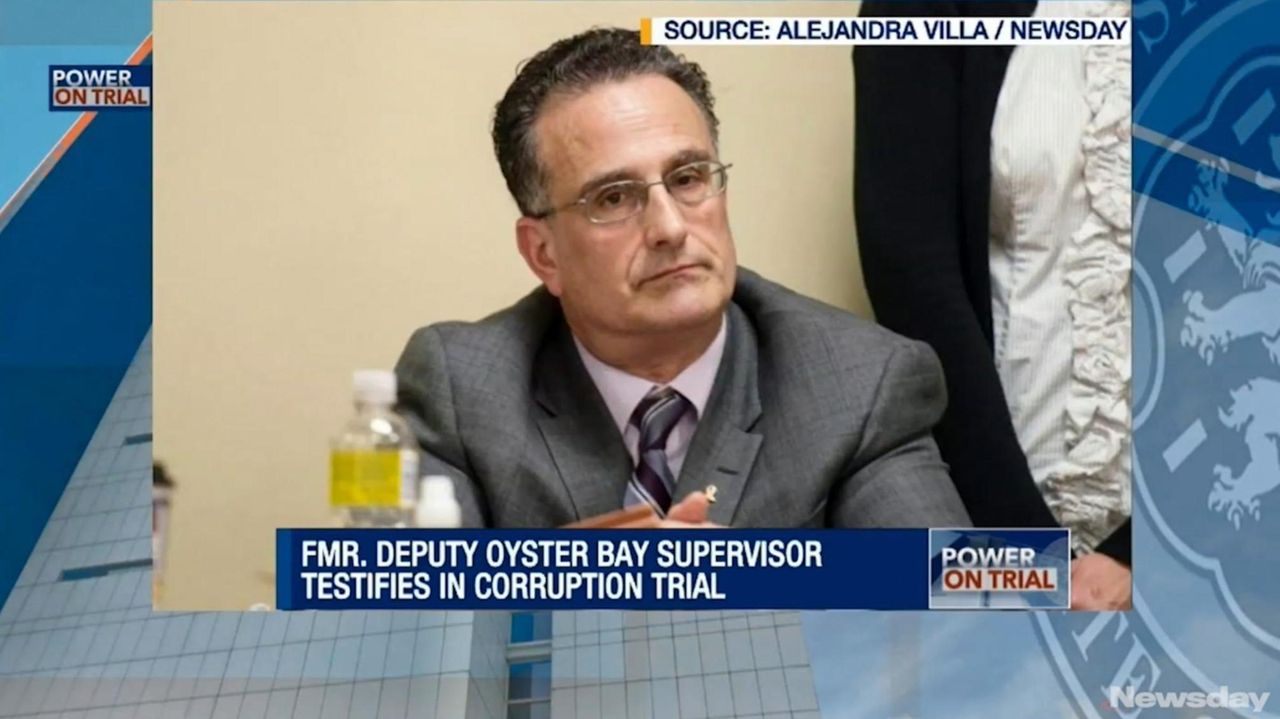 Newsday columnist Joye Brown sat down with News 12 Long Island to discuss the Mangano trial as the former Oyster Bay official who for years worked as right-hand man to town Supervisor John Venditto testified Tuesday that Venditto accepted free meals, free limousine services and use of office and event space from Harendra Singh that appeared, in turn, to entitle the restaurateur to “whatever services” he needed from the town. Credit: News 12 Long Island

A former Oyster Bay official who for years worked as right-hand man to town supervisor John Venditto testified Tuesday that Venditto accepted free meals, free limousine services and use of office and event space from Harendra Singh that appeared, in turn, to entitle the restaurateur to “whatever services” he needed from the town.

Leonard Genova, a former deputy town supervisor, admitted that he, too, benefitted from a relationship with Singh.

He said he relied on Singh when he needed a venue or limo rides and ate for free at Singh’s restaurants.

“In retrospect, you don’t realize how egregious things are,” Genova said.

Power on Trial: ‘Keys to the county’

The witness said he, Venditto and other town leaders who accepted perks from Singh ensured that the town concessionaire’s problems were at the top of their pile.

Asked by Assistant U.S. Attorney Catherine Mirabile to explain what problem such behavior posed, Genova replied: “It compromises you.”

Genova, who has received immunity in exchange for his testimony, was on his second day on the stand at the federal corruption trial of Venditto and former Nassau County Executive Edward Mangano.

“He had the keys to not just the town, but maybe the county,” Genova said.

Genova, who also served as town attorney, said that over the years he saw Singh mixing with judges and police officials and not just Nassau officials, but Suffolk personnel as well.

“I would say he had the keys to Long Island,” Genova said.

He testified that he met Singh for breakfast or lunch eight to 12 times annually, and Singh would make requests that were then were communicated to Venditto.

From 2000 to 2010, Oyster Bay granted every request Singh made with regard to his concession agreements, Genova said.

Mangano, 56, of Bethpage, and Venditto, 68, of North Massapequa, face charges that include conspiracy to commit federal program bribery and honest-services wire fraud, extortion for Mangano and securities fraud for Venditto.

Mangano’s wife, Linda, 54, of Bethpage, was charged with conspiracy to obstruct justice, obstruction of justice and making false statements to the FBI.

Their trial is in its eighth week.

Singh, 59, of Laurel Hollow, testified that he received lucrative county contracts and town-guaranteed loans in exchange for his bribes of the officials. He said he gave Mangano, among other perks, free meals at his restaurants, free vacations to destinations including Florida and the Caribbean and a no-show job for Linda Mangano that paid a total of $450,000.

Singh said Venditto received free meals and limousine services for himself, his friends and his family members.

On Tuesday, Genova testified that Venditto used a conference room in the basement of what once was Singh’s flagship restaurant in Bethpage, H.R. Singletons, about a half-dozen to a dozen times a year for meetings, primarily with other elected officials, Genova said.

“It was a place you could have privacy, something to eat,” Genova said, explaining the appeal included a spot for Venditto to smoke cigarettes indoors.

“If he wanted to smoke, it was easier for him,” Genova said.

“No one would bother them,” Genova said.

Did Venditto pay for the meals? Mirabile asked.

“For the times I was there, no,” Genova said.

The witness was challenged Tuesday by defense attorneys for both Venditto and Mangano on statements he had made in pretrial interviews.

Genova clashed with Venditto’s lawyer, Marc Agnifilo of Manhattan, on his description of the perks he and Venditto received from Singh as “bribes.”

“Before yesterday, did you ever tell anyone in the government you were guilty of bribery?” Agnifilo asked, referencing statements Genova made in advance of testifying.

“Did I use the word bribery?” Genova asked.

“I get to ask the questions,” Agnifilo countered.

Genova attempted to explain that he had “acknowledged” and “identified” the gifts he took and, after U.S. District Judge Joan Azrack interjected to ask if he used the word bribery, conceded: “No, your honor, I did not.”

Genova said the town-hired firm that represented him — Paul, Weiss, Rifkind, Wharton & Garrison of Manhattan — did not have his best interests at heart.

He testified that at those initial meetings with the FBI he was “instructed by the attorney how to answer questions and even how to think, in the midst of a cover-up.”

His voice rising, Genova continued: “You’re dealing with friends and people you’ve known for 25 years. You’ve just lost your wife. You’re not being truthful. Your mindset doesn’t change [to being truthful] in a split second. It’s a process. It didn’t happen overnight.”

Genova repeatedly answered questions about what he did by saying he “was instructed by John Venditto at the behest of Ed Mangano.”

Keating also asked about the key April 28, 2010 meeting of town and county leaders at Venditto’s campaign headquarters in North Massapequa.

Witnesses have testified that both Mangano and Venditto vouched for Singh, who was in need of Oyster Bay’s help to secure a line of credit.

Keating asked if the purpose of the gathering was to work out a proper way to back the loans.

“Trying to find a lawful way to do it was part of it,” Genova said, adding that Mangano and Venditto’s presence, however, sent a message to everyone that the loans were going to get backed — one way or another.

Genova said he didn’t review the loan documents before Singh’s first one closed in 2010 with Madison National Bank, but he has done so since.

Did the solution worked out by Rivkin Radler LLP amount to a loan guarantee? Keating asked.

“It doesn’t appear to be a guarantee,” Genova said.

Mangano practiced at the Uniondale law firm before he was county executive and, according to testimony, requested that its attorneys help Oyster Bay find a way to get financing for Singh.