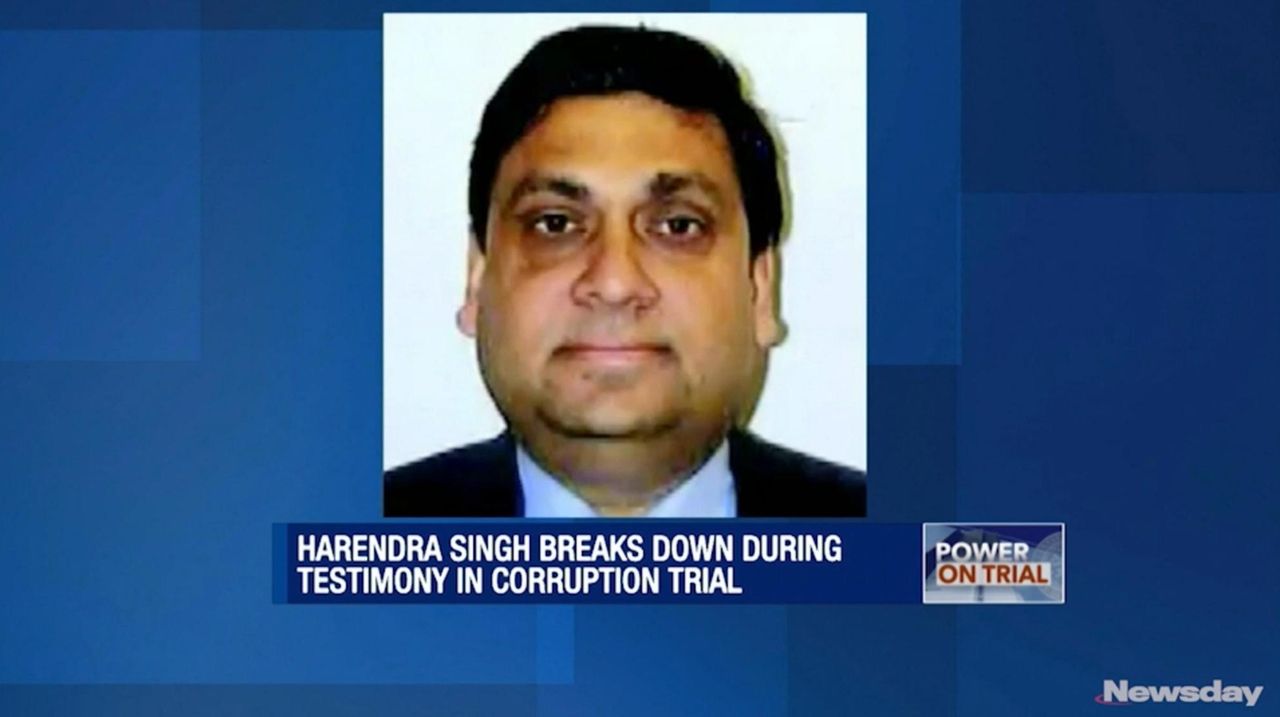 Newsday columnist Joye Brown spoke with News 12 Long Island on Monday about the one-time restaurateur Harendra Singh, who finished his testimony for prosecutors in the federal corruption case of former Nassau County Executive Edward Mangano but faced the start of questioning by their defense teams.  Credit: News 12 Long Island

This story was reported by Nicole Fuller, Emily Ngo, Bridget Murphy, Robert E. Kessler and Andrew Smith. It was written by Ngo.

Harendra Singh’s venues hosted weddings for the families of the Nassau County GOP chairman, two sitting Oyster Bay town board members and a former town parks commissioner for tens of thousands of dollars less than he usually billed, he testified Monday.

Singh also recounted how former Nassau County Executive Edward Mangano and his wife, Linda, were “consumed with panic” in preparing to explain her no-show job to the FBI.

The one-time restaurateur finished his testimony for prosecutors in the federal corruption case of the Manganos and former Oyster Bay Town Supervisor John Venditto in Central Islip, but faced the start of questioning by their defense teams.

Edward Mangano’s attorney, Kevin Keating of Garden City, sought to show jurors that Singh was motivated to cooperate with the government because he wanted to be freed from the Brooklyn jail where he had been held without bail.

Singh, 59, of Laurel Hollow, pleaded guilty in October 2016 to bribing Mangano and Venditto with perks ranging from free meals at his restaurants to Linda Mangano’s $100,000-a-year, no-show job in exchange for lucrative county contracts and millions of dollars in town loan guarantees.

Singh, arrested in September 2015, insisted Monday that he wanted to cooperate with prosecutors from the start but was advised against it by his former attorney.

“I realized I had been living this life of lies and deception, so I had to come forward,” he said.

But Singh in his fifth day on the stand said he distributed discounts and freebies far and wide not only to the Nassau County and Oyster Bay officials he believed would boost his businesses, but also their aides, friends and extended family members.

The daughter of Nassau County Republican Party chairman Joseph Mondello celebrated her wedding about a decade ago at the Woodlands, the Woodbury catering hall where Singh was a concessionaire, Singh said.

The festivities ordinarily would cost $65,000, but the bill was negotiated steadily downward — at the urging of Venditto and his aides — to $35,000, Singh said.

Singh testified that he gave the discount to benefit Venditto because the “supervisor’s political future” depended on “Mondello’s blessing.”

President Donald Trump recently nominated Mondello to the post of U.S. ambassador to Trinidad and Tobago.

Singh said he gave Oyster Bay Town Board member Joseph Muscarella a 40 percent to 45 percent discount for his daughter’s wedding, but Muscarella never paid the remaining balance of about $10,000 or $15,000.

Frank Nocerino, then-town parks commissioner, had a 50 percent discount when one of his daughters was married at the Woodlands and when another daughter was married at Singh’s picturesque Water’s Edge restaurant in Queens.

Oyster Bay Town Board member Anthony Macagnone for his Woodlands wedding only received a discount of 30 percent to 40 percent, Singh said.

The three are on trial together and have pleaded not guilty.

Singh on Monday described the panicked period that followed the FBI’s raiding in April 2014 of his flagship restaurant, H.R. Singletons in Bethpage, and the FBI’s visit in January 2015 to Linda Mangano at her Bethpage home.

Singh and the Manganos huddled at their home, he said, to fabricate a story on what Linda Mangano did in her work for him.

“I wanted to protect them, because Ed Mangano was my friend and he was county executive and he was helping me in different matters,” Singh said.

“Both Linda and Ed were saying, ‘Remember H, I did this for you,’ ” Singh said.

The witness added that he also was looking out for himself.

“If they were protected, then I would be safe,” he said.

Keating, Edward Mangano’s lawyer, sought to attack Singh’s character and stress that Singh took a plea deal and betrayed his friend in hopes of less time behind bars.

Linda Mangano’s attorney, John Carman of Garden City, noted inconsistencies in Singh’s version of what she did in his employ.

“It’s going to be a long few days for him,” Carman said.

Singh at one point in his morning testimony dissolved into tears when he discussed losing his restaurant empire upon his arrests in 2015 and leaving his parents “heartbroken.”

They included Venditto’s assistant, Steve Marx; one of Venditto’s sons, Michael, and a daughter, Joanne; Venditto’s cousin, also named John; both the girlfriend and the wife of Venditto’s chief of staff, Richard Porcelli; one of the Manganos’ sons, Sal; former town attorney Leonard Genova’s wife, Stephanie; and Mike Falzarano, an investigator for the Nassau district attorney’s office.

Mirabile asked if there were others for whom Singh provided meals and favors in the town or the county.

“There are so many people I don’t remember everybody,” he answered. He said the list included former Acting Police Commissioner Thomas Krumpter, former Sheriff Michael Sposato and others.

Singh also described how he took former deputy town attorney Frederick Mei with him to India in 2010, paid $5,000 to fix the driveway at Mei’s Bayville home and gave Mei cash rewards for getting loans guaranteed by the town. He said he and Mei used burner phones to evade federal authorities.

Mei, who has pleaded guilty to taking bribes from Singh that included payments to cover Mei’s BMW lease, is expected to be another cooperating witness for the prosecution.

In 2014, when Singh and Mei became aware that the FBI was investigating them, Singh said they both got burner phones — prepaid phones that are more difficult for law enforcement to trace and to tie to a particular person.

“He didn’t want anyone to know of our conversations,” Singh said of Mei.

Singh testified he also gave free meals and discounted event hosting to Krumpter after he became Nassau’s acting police commissioner and picked up the tab of $20,000 to $30,000 for a barbecue that Frederick Ippolito, Oyster Bay’s now-deceased planning commissioner, had at his home in 2013 or 2014 for more than 400 guests.

“He was a very, very key person to the supervisor’s inner circle so keeping him happy was the path to go,” Singh testified.