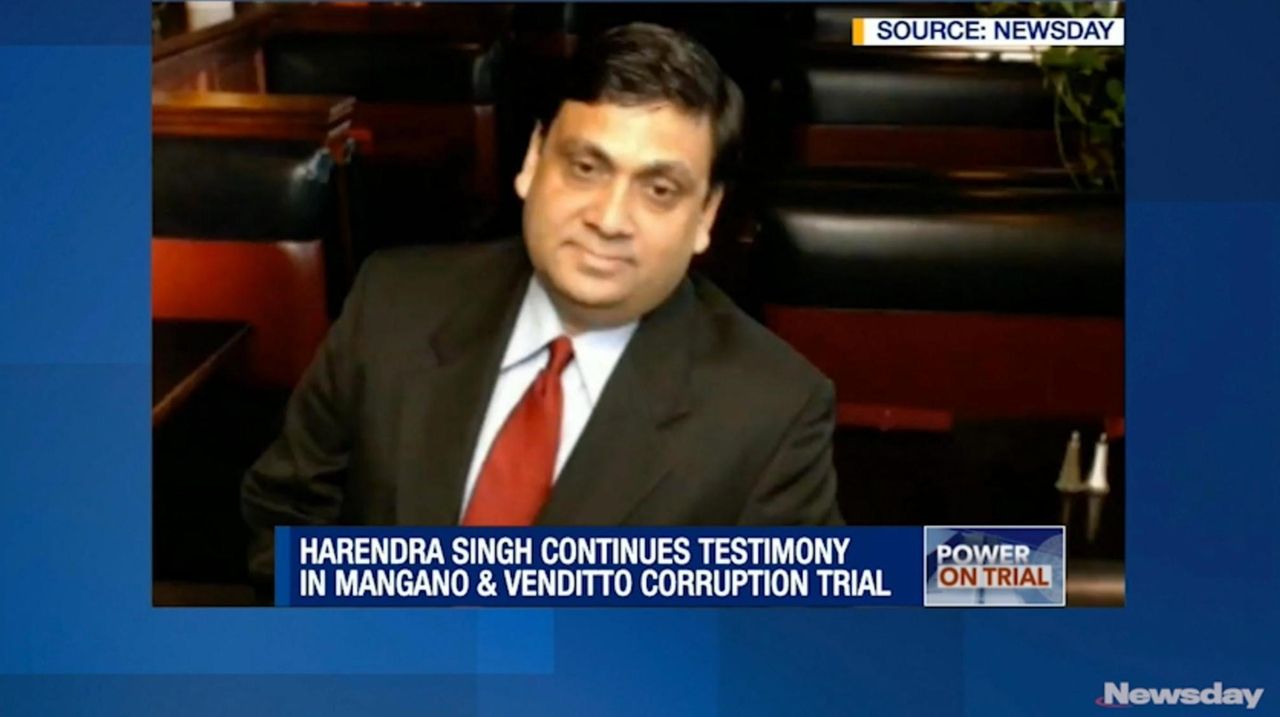 What qualified Linda Mangano to be marketing director at his Queens restaurant? the prosecution asked its star witness.

“Her qualification was she was the county executive’s wife,” Singh replied.

Singh paid Linda Mangano $100,000 annually — a rate set by her husband — but expected no work from her, he testified in his second day on the stand.

Singh also hired one of the couple’s sons, Sal Mangano, as a server and then a manager, paid him in cash “off the books” and gave him special treatment, Singh said.

In the fourth day of the trial of Edward and Linda Mangano and former Oyster Bay Town Supervisor John Venditto, Singh painted for jurors in Central Islip a portrait of how he felt obligated to pay Linda Mangano despite his financial struggles and how Nassau and Oyster Bay Republicans met to help him secure business loan guarantees.

If Linda Mangano’s paycheck was late, “I would get a phone call from Ed saying, ‘We didn’t get the check,’” Singh said.

“She didn’t come to work, so we had to deliver the check,” Singh said of hand-delivering it to the Mangano home.

Singh, 59, of Laurel Hollow, pleaded guilty to bribing Edward Mangano and Venditto with perks including free meals at his restaurants and the job for Linda Mangano that would total $450,000 in pay — in exchange for county contracts and indirect loan guarantees by the town.

Defense attorneys for the Manganos and Venditto have sought to undermine Singh’s credibility as a government witness. They are expected to cross-examine him in coming days.

Linda Mangano’s attorney, John Carman of Garden City, said he believed it unwise to build a case on Singh’s testimony.

“The government has said in open court: ‘Mr. Singh lies, even his mother lies. He cannot be trusted,’ ” Carman said at the end of the day. “Today, he plays the role of their star witness.”

Edward Mangano’s attorney, Kevin Keating of Garden City, said after testimony ended Monday that the prosecution presented a “carefully crafted examination of Singh. ... But he’s not telling the truth. We’re confident that by the end of this trial, the truth will come out.”

Singh, guided Monday by questioning from Assistant U.S. Attorney Catherine Mirabile, discussed hiring the Manganos’ son Sal, first as a server making $5 an hour plus tips at Singh’s flagship H.R. Singletons in Bethpage and then as a manager making $900 a week at a Tobay Beach eatery.

His father would call Singh when Sal wanted time off, Singh said.

“He will tell his father, who would call me and say, ‘Sal needed time off,’ ” Singh said.

“He was the county executive’s son and I will be needing him, so I had to be nice,” Singh said.

During Singh’s testimony, prosecutors displayed for the jury an email showing the town’s outside counsel, Jonathan Sinnreich, telling its in-house attorneys, Frederick Mei and Leonard Genova, that it was “illegal” for the town to guarantee loans for Singh.

Linda Mangano’s first paycheck from Singh was dated April 9, 2010, two days after Sinnreich sent the email. Her last paycheck was dated Aug. 4, 2014 because, Singh testified, the FBI raided his office the following day with a search warrant.

Genova, who has immunity, and Mei, who pleaded guilty to accepting bribes from Singh, are both expected to be prosecution witnesses.

Singh, as he did Thursday, stressed why he continuously went through Mangano to get to Genova, Venditto and others.

“I wanted to go to the top guy to get this done: County Executive Ed Mangano,” Singh said.

“Folks, can you find a way to help our friend?” Venditto asked, according to Singh, who said he interpreted it as a direction to the Rivkin Radler lawyers.

“I think that I found a solution to get around the New York Constitution,” Cornachio told Singh later, Singh testified.

Cornachio’s solution called for making an amendment to the license agreement between Singh’s businesses and the Town of Oyster Bay that said, in case of a default by either side, the town would pay any money owed first to Singh’s lenders and then to Singh, the witness said.

It was a loan guarantee without using the language of a guarantee, Singh said.

The language convinced Madison National Bank to issue two loans worth $4.9 million and Westchester County-based NDH Capital to loan another $13.5 million over the next two years.

Oyster Bay’s town board passed a resolution on June 8, 2010 directing Venditto to amend agreements to facilitate Singh’s ability to obtain financing to make capital improvements to the golf course and beach concessions he controlled.

Venditto’s attorney, Agnifilo, pointed out that the word “guarantee” does not appear in the resolution. Instead, the vaguely worded document merely directs Venditto to amend the agreements “to effectuate the purposes of this resolution.”

While the laundering allegation is not part of the charges against Mangano, prosecutors wish to admit the evidence to show that Mangano and Singh had a propensity to act illegally.

“Ed Mangano has never taken a bribe in his life and we will fight the issue to the end,” Mangano’s attorney, Keating, said.

The trial continues Tuesday in federal court in Central Islip.

Power on Trial: Singh talks building an empireYou've got mail The testimony of Harendra Singh Monday about his efforts to get Oyster ... Who’s who in the trialKey figures in the ongoing political corruption trial of former Nassau County Executive Edward Mangano, his wife, Linda, and former Town of Oyster Bay Supervisor John Venditto. Feds: Mangano, Venditto circumvented processThe political ties between former Nassau County Executive Edward Mangano and former Town of Oyster ... Singh saw Mangano as business ‘connection’ Harendra Singh testified against Edward Mangano as a "connection" who would help his businesses flourish.