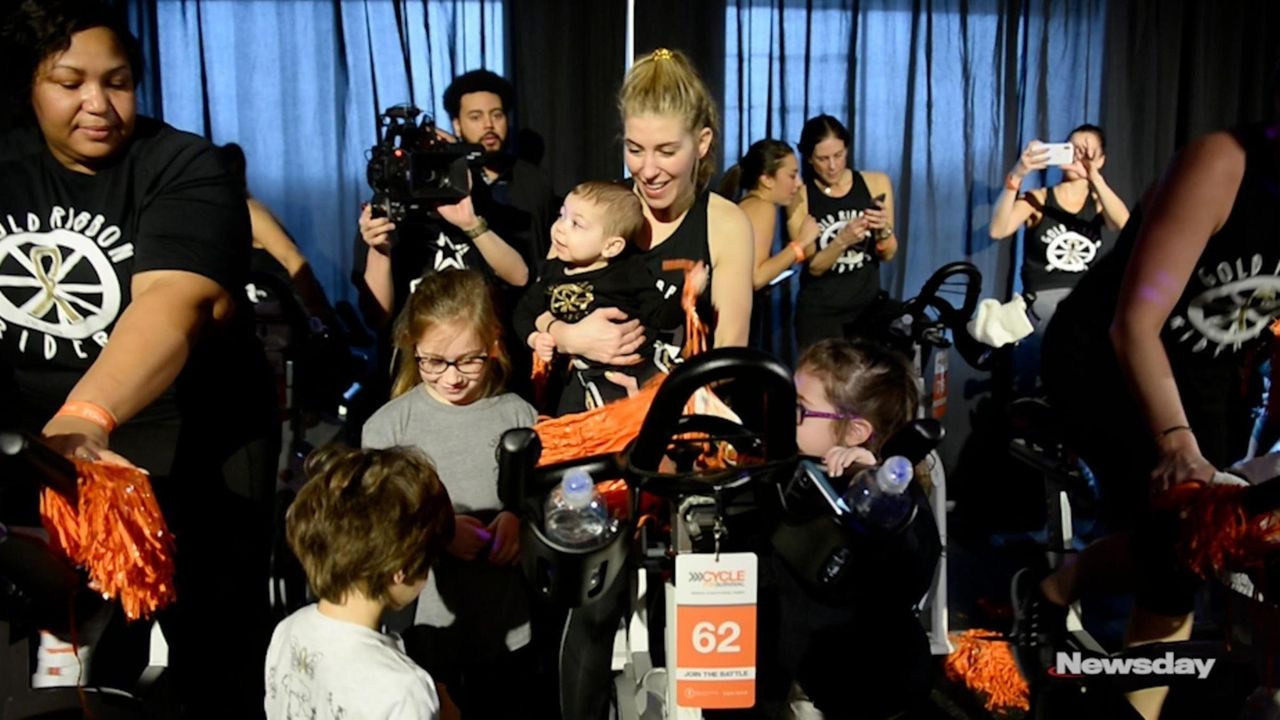 A year ago Jamie Weiss of Muttontown found out her 10-month-old daughter, Sawyer, had cancer. Today, tests show Sawyer is cancer-free, but her ordeal inspired Weiss to raise hundreds of thousands of dollars for cancer research, to find a cure so other children don't suffer. On Saturday, she and hundreds of others pedaled on stationary bikes at a Woodbury gym as part of a nationwide Cycle for Survival fundraiser for cancer research.  Credit: Debbie Egan-Chin

Jurors — who never had to attend court five days in a row during the trial — didn’t take long to make it known that they had reached a verdict on Friday.

In the courtroom, all remained quiet — and the hallway outside virtually deserted — when, at 11:05, a court reporter walked in carrying a transcription machine.

The panel’s note was succinct: “The jury has reached a verdict.”

It was signed by the foreman.

For several minutes, the courtroom remained almost empty — until, at 11:10 a.m., Edward and Linda Mangano walked in.

They sat at the defense table with their attorneys, Kevin Keating and John Carman.

Linda Mangano’s hands shook and at one point, she emptied a rosary from its container and placed it into her pocket.

Edward Mangano was stoic — although, from time to time, he would reach over to calm his wife, or drum his fingers on the table.

Soon every spectator bench in the room was filled, with supporters and family and reporters and Federal Bureau of Investigation agents and court personnel.

Friday was Donoghue’s first appearance during the retrial; last year, he had attended the first day of prosecution summations.

Keating, who at one point had walked up to talk to court reporters, returned to the defense table — gathering up a telephone charger and stuffing papers into a briefcase.

“I assume you have been advised,” Azrack told the room, which had fallen silent, “that we have received a note . … Are we ready to take the verdict?”

Carman, Linda Mangano’s attorney, rose at that point to say that his co-counsel, “Sara Pervez is in the parking lot.”

He asked if Azrack would delay bringing the jury in.

“I think she’ll be embarrassed by the grand entrance,” Carman said, referring to the walk Pervez would take up the aisle of a packed courtroom.

“Let me know when she is here,” Azrack said, and left the bench.

At the defense table, Linda Mangano clasped her hands, as Keating reached over to Edward Mangano, grasping his arm in a silent show of support.

Several minutes would pass before there came a knock on a courtroom door — a signal that jurors were about to enter.

The panel — including four alternates, who did not deliberate — filed in.

They looked at the judge.

They looked neither at the defendants nor the prosecutors.

The panel was asked whether they had a verdict.

“Yes, we have,” the jury foreman answered.

At that, he answered the panel’s findings for each of 11 counts on the verdict sheet.

On hearing the panel’s verdict on the first count of guilty on the charge of conspiracy to commit federal program bribery against her husband, Linda Mangano rested her head on the defense table.

On hearing the jury’s finding that the conspiracy involved Town of Oyster Bay-backed loans to former restaurateur Harendra Singh, Mangano flung out his right hand in a sign of disgust and disbelief.

As the foreman rendered decisions on the remaining counts, Edward Mangano, at one point, reached over to comfort Linda Mangano.

On hearing the panel’s findings of guilty on conspiracy and false statement charges against her, Linda Mangano, as she had several times during both trials, broke down in tears.

“I thank you for your time, your effort, your attention,” Azrack told jurors after the foreman sat down. “We all know that it is not an easy task, what you did …”

“You are now discharged,” she continued.

With that, the panel filed silently from the room.

At the defense table, Linda Mangano sat down, turning her chair to the side as Carman — and Edward Mangano — offered words of comfort.

A few feet away, Donoghue shook each trial prosecutor’s hand.

There also were plentiful congratulatory hugs as colleagues of the prosecution team crowded to the area behind the table.

Mangano supporters, meanwhile, gathered in the aisle near the defense table.

The prosecution side of the courtroom was empty when Mangano, their attorneys, family and friends left.

“There is going to be a vigorous appeal,” Keating said.

“I am going home to take care of Linda,” Mangano said, “and we will continue our fight.”

The Manganos left the building.

In the lobby, a spokesman for the U.S. Attorney’s Office was seen walking toward the front door, along with a man with a video camera — presumably to prepare for a news conference before the gaggle of reporters and photographers awaiting outside. (The prosecution team later would be seen gathering for a photograph below the painting of former U.S. Sen. Alfonse D’Amato, the courthouse’s namesake, who, like Mangano, began his political career in Nassau.)

All was still — until jurors emptied from a courtroom elevator, making their way toward a parking lot in the opposite direction.

Of all the jurors and alternates, only one agreed to stop and talk with Newsday.

The juror — who did not want to be identified — said the panel, as some courtroom observers had speculated, worked their way through the charges with the judge’s 46-page instructions as a guide.

“We followed that,” the juror said. “It was the best legal info that we had.”

“We started with Linda,” the juror went on — which explains why the first jury request was for exhibits relating to the false statement charges against Linda Mangano. “And then, we went back to Ed, which was good, because we refocused on how everything came to that point.”

But the juror said, “The Town of Oyster Bay just kind of really jumped out at us, it seemed to be the core of it.”

The juror said the panel was as attentive and cooperative during deliberations as it appeared to be to courtroom observers during the retrial: “We had educators, we had a lot of different people, people who were just beautiful to deal with.”

At times, even when jurors were undecided, “We kept our composure,” the juror said. “We went back to the evidence, and we looked at the letter of the law.”

Did six weeks hearing testimony in a Long Island corruption-related case change his view of government?

“I think that kind of thing goes on beyond Nassau County,” the juror said. “We’re all adults here, we know how government works. I guess it takes a court of law to bring that perception into reality.”